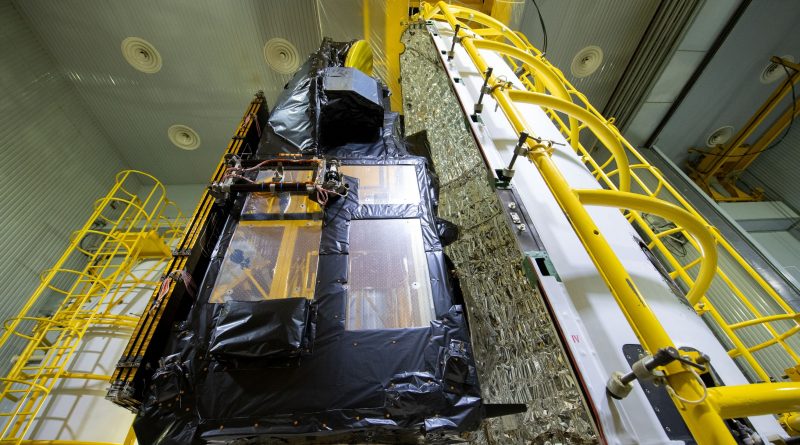 
Sentinel-3B will be the seventh satellite launched under Copernicus, joining two Sentinel-1 Synthetic Aperture Radar Satellites, the Sentinel-2 high-resolution imaging satellites, the Sentinel-5 precursor for atmospheric monitoring and the first Sentinel-3 satellite. Operated as a joint venture by the European Commission, the European Space Agency and the European Weather Agency Eumetsat, the Copernicus/GMES program has the primary objective of collecting and making available a comprehensive set of Earth observation parameters collected by different instruments embarked on several satellite missions as well as other data sources like airborne terminals.


Wednesday’s Rockot/Briz-KM launch is targeting a near-circular injection orbit of 810 Kilometers, inclined 98.65 degrees from where the satellite will use its own engines to join Sentinel-3A at an in-plane phase angle of 140 degrees in a setup optimized to cut the revisit time of the two-satellite constellation to less than two days. Another two satellites are on order to join the constellation in the first half of the 2020s to increase revisit time and ensure data continuity.


On Wednesday, the satellite team at the launch site and the European Space Operations Center in Germany will head into a seven-hour countdown operation to put the Sentinel-3B satellite through final checkouts, configure it for launch and complete data flow checks with the various ground stations involved in the mission. Wednesday’s launch will initially be supported by Russia’s Ground Station Network tracking the ascending Rockot vehicle followed by passes over ground stations in South Africa, Kenya, Belgium and Sweden – supporting launch vehicle telemetry relay as well as communications with Sentinel-3B after spacecraft separation.