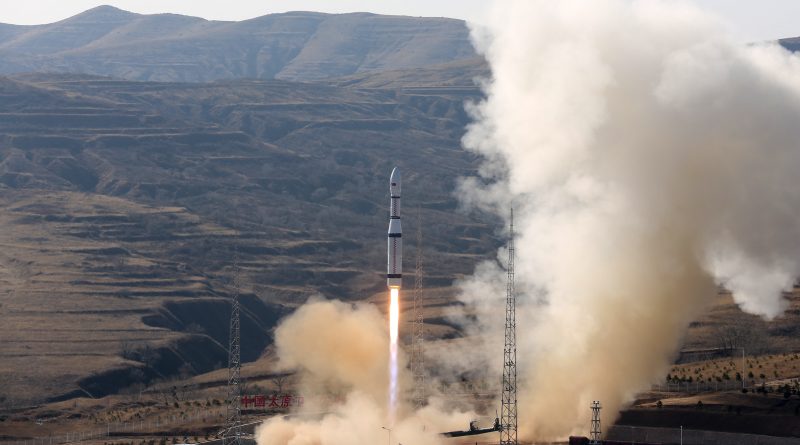 China’s Long March 6 rocket carried out its second flight on Tuesday to lift a trio of Jilin-1 high-resolution video satellites into orbit to join a growing constellation of commercial Earth observation satellites.

The 29-meter tall Long March 6 rocket lifted off from Launch Complex 16 at the Taiyuan Satellite Launch Center at 4:50 UTC on Tuesday, 12:50 p.m. local time and Chinese state media reported the launch was a success, confirmed by orbital data for four objects related to this mission.

A number of satellites flying under the Jilin designation have launched in recent years as part of a self-developed remote sensing satellite project of Chang Guang SatelliteTechnology Ltd. with funding from the Jilin province to accelerate a local satellite production capability. Also involved in the project are the China Academy of Sciences, the Harbin Institute of Technology and a number of contractors delivering satellite components. The goal is to establish a powerful Earth observation constellation combining different types of satellites including high-resolution video and imaging satellites as well as technology demonstration missions using different satellite buses to demonstrate a range of capabilities.

The Jilin-A series comprises larger satellites in the 450kg range employing a telescopic imaging payload capable of achieving a ground resolution of 0.72 meters for panchromatic imagery and four meters for multi-spectral imagery including color and near-infrared image products across a ground swath of 11.6 Kilometers. Jilin-2A, the second in the series, is expected to launch in 2018 on a Kuaizhou-11 rocket – highlighting Jilin’s ability to launch on a broad range of launch vehicles to ensure new satellites can reach orbit even if one particular launcher is unavailable.

The Jilin-1 video constellation satellites each weigh around 95 Kilograms and measure 1.2 by 1.1 meters in size, hosting a camera system capable of achieving a ground resolution of 1.13 meters, covering a frame of 4.3 by 2.4 Kilometers. Imagery from the Jilin-1 constellation is offered on the commercial satellite market and is hoped to find application in a number of areas such as forecasting and mitigation of natural disasters, resource exploration and various monitoring tasks.


The Jilin-1 small satellite project has outlined an ambitious plan for the operation of a large constellation that could image any spot on the globe within minutes.

The next two Jilin-1 satellites are targeting launch in January on a Long March 11 rocket and the project hopes to have 16 satellites in operation in 2018 and 2019 to be able to support a revisit time of four hours for any given ground target. From 2020, the constellation will be boosted to sixty operational satellites for a refresh time of 30 minutes for any target and the ultimate goal is a 138-satellite constellation around 2030 to achieve an all-day, all-weather imaging system with a revisit capability of ten minutes. This would make Jilin 1 the world’s most powerful space-based imaging system for the combination of time and spatial resolution of information products.

Tuesday’s launch took place at precisely 4:50:13.723 UTC and delivered the three Jilin satellites into an orbit of 530 by 542 Kilometers at an inclination of 97.5 degrees; the Long March 6 upper stage has been detected in a 390 by 530-Kilometer orbit.

Long March 6 is the smallest member in China’s new line of liquid-fueled launch vehicles, operating alongside the medium-lift Long March 7 that is sized for Low Earth Orbit logistics as well as Geotransfer missions and the heavy-lift Long March 5 for Space Station module launches, heavy Geostationary deliveries and interplanetary missions.

To streamline production, reduce cost and decrease overall complexity, all three of these rockets have a number of common components like engines and they share tank diameters to allow the same tooling to be used in production.

Long March 6 flew for the first time on September 19, 2015 with a series of small satellites, marking a critical demonstration mission for the CZ-5/6/7 series that paved the way toward test flights of the larger family members in 2016. Long March 6 stands 29.24 meters tall and has a first stage diameter of 3.35 meters with an empty mass of 9,020 Kilograms and a fueled launch mass of 103,200 Kilograms. The rocket is capable of lofting 1,080 Kilograms into a Sun Synchronous Orbit.

Long March 6 blasted off from Taiyuan under the loud thunder of its first stage, powered by a single YF-100 engine delivering a thrust of 120,300 Kilogram-force, burning 410 Kilograms of Kerosene and supercold Liquid Oxygen each second of flight. YF-100 is a high-pressure staged combustion engine using an oxygen-rich preburner that delivers the high-pressure gas needed to drive the engine turbopump which feeds propellants to the combustion chamber of the engine, normally operating at 180 bar. The engine can throttle from 65% to 100% to allow the launch vehicle to fly flexible mission profiles.

CZ-6 employs two-axis gimbaling of the engine for stabilization in the yaw and pitch axes while roll control is provided by four 1-Kilonewton thrusters burning a combination of Hydrogen Peroxide and Kerosene.

The first stage of the Long March 6 was to burn for about three minutes, consuming 76 metric tons of propellants in the process. The second stage of the vehicle has a length of around 7.3 meters and a reduced diameter of 2.25 meters, enabling it to hold 15,150kg of propellants for consumption by a single YF-115 engine that has the ability of performing more than one burn for injections into a variety of orbits.

YF-115 is a turbopump-fed engine delivering a total vacuum thrust of 17,850 Kilograms. Control on the second stage also uses engine gimbaling for pitch/yaw and a group of four 25-Newton thrusters for roll.

Sitting atop the second stage is the optional Long March 6 Trim Stage that measures around 1.8 meters in length and 2.25 in diameter featuring a set of four main thrusters, providing a total thrust of 410 Kilogram-force by burning Hydrogen Peroxide and Kerosene along with eight 100 Newton thrusters for attitude control. This stage is capable of making multiple burns over a long mission duration to target a variety of orbits with precise insertion capability.