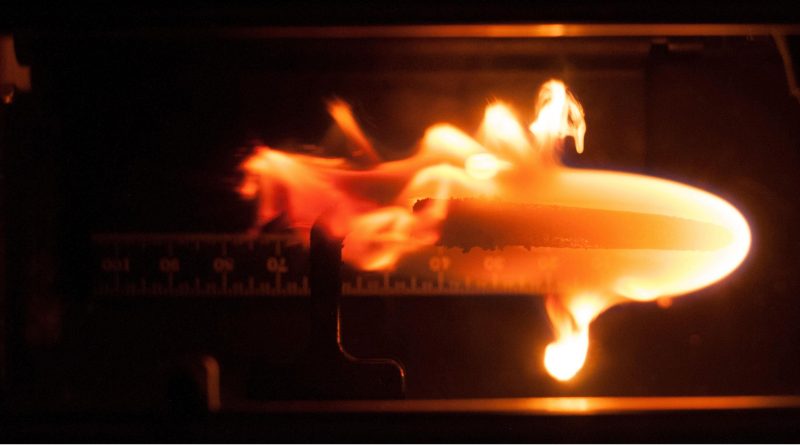 The Cygnus OA-6 spacecraft departed the International Space Station on Tuesday after an 80-day stay, heading into a second mission phase dedicated to an unprecedented in-space fire experiment involving the largest man-made fire ever to be lit in space.

SAFFIRE-I, the first Spacecraft Fire Experiment, intentionally lit a large-scale fire inside the Cygnus spacecraft after its departure of ISS, a few days before it re-enters Earth’s atmosphere. Only very few experiments were run to study combustion and fire processes in microgravity, let alone large-scale fire progression within a spacecraft.

Previous combustion studies conducted in space involved fires the size of a small index card. The three-part SAFFIRE study will set fire to samples as large than a hand towel. Two of the SAFFIRE Experiments examine flame spread in larger samples while one experiment run will test different materials to assess their flammability and self extinguishing properties in the space environment.

The fire was contained in an experiment enclosure and the risk of damage to the Cygnus spacecraft is considered extremely low, however, the experiment was only performed once Cygnus was at a safe distance to ISS with no possibility of re-contact should anything go majorly wrong.

NASA’s Glenn Research Center is in charge of the experiment with representatives present at Orbital ATK’s Dulles Mission Control facility to send commands for the activation of the experiment five hours after Cygnus departure. To provide a pristine microgravity environment for the experiment run, Cygnus will be commanded into Free Drift with all thrusters inhibited.

The SAFFIRE experiment run is expected to last up to two and a half hours.

SAFFIRE aims to study a realistic fire on a space vehicle, looking at flame growth, temperatures and oxygen use to assess how microgravity and limited oxygen affect the properties of a fire. Data from SAFFIRE will be used to improve fire safety on future crewed spacecraft and help NASA in choosing materials for future vehicles.

“A spacecraft fire is one of the greatest crew safety concerns for NASA and the international space exploration community,” said Gary Ruff, Saffire project manager.

SAFFIRE proposes to set fire to material samples around one meter in size to study large-scale flame growth and fire dynamics not possible within the experiment facilities of ISS.

The SAFFIRE experiment package consists of a flow duct and an adjacent avionics bay housing various sensors and associated power and data systems. Atop the flow duct is a fan creating air flow through the system and on the bottom is a grid serving as a flow straightener.

The SAFFIRE Experiment Unit measures 53 by 90 by 133 centimeters in size comprised of the larger flow duct and the avionics bay occupying the smaller volume, the entire unit affixed to internal spacecraft structure with conventional cargo straps. Within the avionics section are power management units, two cameras, a USB Hub and signal conditioning electronics receiving data from the sensors, compressing it and sending it to the spacecraft for downlink.

Installed within the system are temperature, oxygen and carbon dioxide sensors located at the intake of the flow duct and upstream of the fans. A pressure sensor and flow anemometers are placed at select locations to quantify the oxygen inflow. A pair of video cameras provide views of the sample and an LED light source periodically illuminates the sample to allow the measurement of the pyrolysis length.

The sample material is approximately 0.4 by 1 meter in size, consisting of a panel of thin material. Ignition is accomplished with a hot wire along the upstream edge.

The SAFFIRE-II test will use nine sample strips of 5 by 30 centimeters to assess the Maximum Oxygen Concentration (MOC) flammability limits of different materials commonly used on crewed spacecraft.

The SAFFIRE I and III experiments will use a 40-centimeter wide and 94 centimeter long sample of 75% cotton and 25% fiberglass blend burned at two different air flow speeds.

The big advantage of conducting the experiment on a free flying spacecraft is the elimination of risk to the ISS crew and the fact that there is no need for a clean-up following completion of the experiment since Cygnus will be disposed of any way. Downlink of collected data will take a period of days, requiring Cygnus to remain in orbit for another week after its departure ahead of a targeted destructive re-entry over the Pacific Ocean on June 22.

“Saffire is all about gaining a better understanding of how fire behaves in space so NASA can develop better materials, technologies and procedures to reduce crew risk and increase space flight safety,” said Ruff.

The next SAFFIRE Experiments will be run on the OA-5 and OA-7 missions later this year with another three experiment packages under development for flight in the 2018 time frame taking into account lessons learned in the first three experiment sessions.