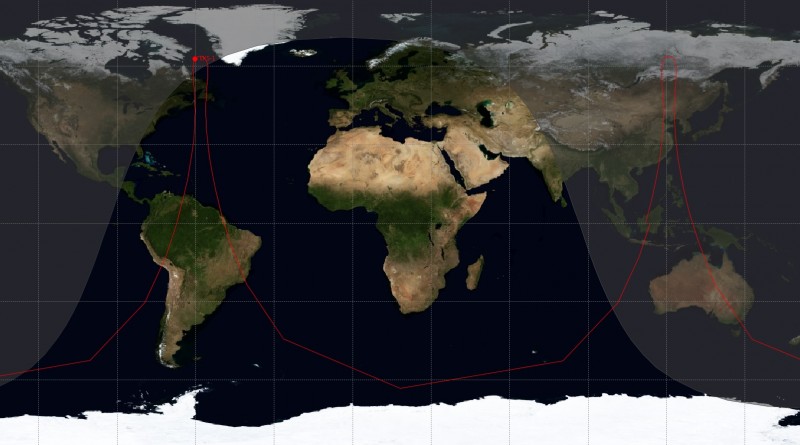 Soyuz 2-1B carrying the first EKS satellite blasted off from the Plesetsk Cosmodrome on Tuesday at 6:34 UTC and began heading to the south-east towards an orbital inclination of around 63 degrees which is identical to that commonly used for Molniya and Tundra orbits. The three stages of the Soyuz rocket operated for just under nine and a half minutes before the Fregat Upper Stage was separated and assumed control of the mission.

Starting out in a sub-orbital trajectory, Fregat was tasked with a three-burn mission profile. The first burn occurred immediately after separation from the Soyuz and boosted the stack into a Low Earth Parking Orbit for a short coast phase. This coast phase was implemented to set up the targeted orbital parameters with respect to argument of perigee leading to the placement of the position of the orbit’s apogee. The second burn significantly raised the apogee of the orbit and the stack entered the mission’s longest coast of over three hours to reach a position closer to the apogee of the orbit so that the third burn could raise both, perigee and apogee.

Tracking data released in the overnight hours show the EKS-1 satellite and Fregat Upper Stage in the following orbits:

These orbital parameters show that the first EKS satellite entered a standard Molniya orbit instead of the Tundra orbit which was the expectation given the mission’s reported ‘Tundra’ codename and the satellite’s purpose of monitoring incoming missiles heading to the Russian territory.

Molniya orbits have a duration of half a sidereal day with two apogee passages per day, both located at fixed positions over the northern hemisphere, making this orbit suitable for coverage of the high-latitude regions. A Tundra orbit is also highly elliptical, but it represents a geosynchronous orbit with a duration of exactly one sidereal day so that the satellite passes its apogee over the same high-latitude location every day, spending most of its time around the apogee of the orbit to provide coverage to its target region. Launching into Molniya orbit requires less energy than inserting a satellite into a Tundra orbit.

The Molniya orbit was named after the first type of satellite that used this orbital trajectory. The launch vehicle that launched the bulk of Molniya satellites was also named after them. Like the Soyuz, Molniya launchers were based on the R7 ballistic missile.

The orbital design of Molniya orbits requires an inclination near 63.4 or 116.6 degrees with a period of half a sidereal day (~12 hours). Choosing an inclination of 63.3 or 116.6 degrees allows the satellite to have a constant argument of perigee of 90 or 270 degrees because the orbits are not perturbed by the gravitational field of Earth (J2 term of the Geopotential Model). This allows the satellite to have a constant perigee and apogee location on Earth over the course of its mission – for Molniya orbits, apogee is located above the northern hemisphere.

Relative to Earth, the satellite’s speed is slowest at higher altitudes, meaning that the spacecraft spends the majority of its time around apogee. Communication satellites in Molniya orbits operate for eight hours per orbit centered around the apogee passage. In order to achieve a continuous coverage over the northern hemisphere, at least three spacecraft in Molniya orbits are required with appropriate spacing in right ascension of ascending node. The major benefit of a Molniya orbit despite being less energetic than GEO is the coverage of the polar regions which is in many cases not possible from Geosynchronous Orbit due to low elevation angles.

Both, Molniya and Tundra orbits require a constellation of satellites to deliver coverage to a chosen area on Earth as satellites dip below the horizon when passing perigee. At least five EKS satellites are expected to be launched until 2020.