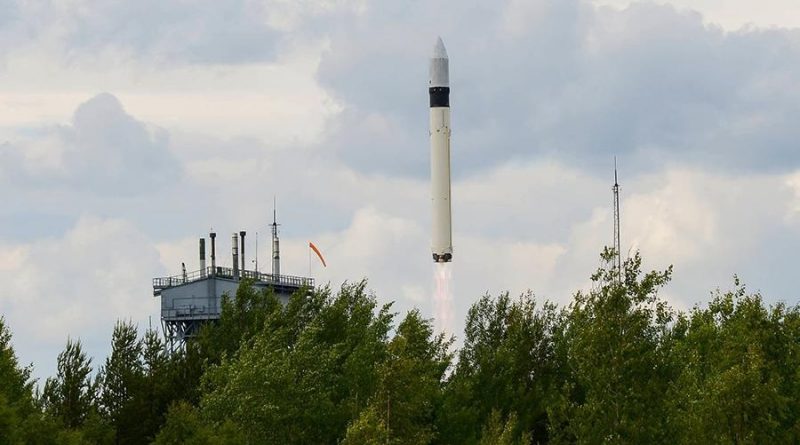 A Rockot launch vehicle arced into the skies over the Plesetsk Cosmodrome on Saturday, carrying into orbit Russia’s GEO IK-2 No. 2 Geodesy satellite in an attempt to close a gap in the collection of geodynamic data.

Rockot – Russia’s light-lift workhorse – lifted off from Site 133/3 at 14:00 UTC and was to swing to the north-west to head into a polar orbit from where the satellite can study the entire planet. The two-stage Rockot was in action for five and a half minutes, lifting the 900-Kilogram satellite and its Briz-KM upper stage to a sub-orbital trajectory. Briz-KM then assumed control of the flight by completing a pair of burns, first into an elliptical transfer orbit and the second aiming to circularize the orbit just over 1,000 Kilometers in altitude.

Separation of the GEO IK-2 No. 2 satellite occurred just shy of two hours into the mission. Confirmation of launch success was provided through the Russian Space Forces after contact with the satellite had been established.


Canadian environmentalists had protested the upcoming launch due to concerns with the rocket’s second stage drop-zone in Baffin Bay located between Greenland and Ellesmere Island, within Canadian jurisdiction. Despite the protests of Greenpeace fearing a possible contamination of the arctic waters, no statements were made by the Canadian or Russian governments and the launch went ahead as planned.

GEO IK-2 No.2 is the second in Russia’s third generation of geodetic satellites in a program dating back to the 1980s. Initially, GEO IK-2 was to consist of heavy satellites launched from Plesetsk by the Zenit rocket, but the fall of the Soviet Union brought an untimely end to the program. In the early 1990s, a new satellite design was submitted, suited for launch atop the Soyuz 2 rocket, though funding woes ended the effort in 1997.

GEO IK-2 in its current form began development in the early 2000s to close a gap in geodetic missions since the final of its predecessors had launched back in 1994. The first GEO IK-2 finally reached the launch pad in 2011 and lifted off atop a Rockot/Briz-KM on February 1. During the ascent mission, Briz-KM suffered an attitude control problem and left the satellite stranded in a 370 by 1,070 -Kilometer orbit from where power generation and communications were a problem.

The GEO IK-2 No. 1 satellite was used for some testing of its platform system and instruments, but was not capable of fulfilling its function from the elliptical orbit is was in. It eventually re-entered in July 2013.

The second GEO IK-2 satellite was set to fly in 2014, but a major electronics upgrade to radiation hardened systems delayed the mission first to 2015 and then to 2016 when final testing operations dragged on. GEO IK-2 No. 2 arrived at Plesetsk in March and was working towards a launch in May before a two-week delay was called due to unspecified technical issues.

The GEO IK-2 No. 2 satellite carries a radar altimeter supplied by Thales Alenia Space. The SADKO-3 altimeter is based on the design of the Poseidon altimeters flown on the Jason ocean altimetry satellites, adapted to operate from a 1,000km orbit instead of the 1,347-Kilometer Jason orbit. SADKO-3 bounces radio waves off the ground and measures how long they take to return to the satellite, thus precisely measuring the distance between the spacecraft and the ground. By precisely determining the orbit of the satellite, these measurements will reveal ground topography and other properties.

For precise orbit measurements, GEO IK-2 No. 2 is outfitted with a Doppler ranging system, laser retroreflectors and GPS/Glonass navigation terminals. A Russian-built altimeter was also planned to fly on the satellite, whether that is the case has not been revealed pre-launch.

Geodetic data finds application in scientific studies looking at tectonic plate movements, gravitational properties and ocean currents, but is also needed in a number of military applications. Knowledge of Earth’s gravitational field can feed into guidance of ballistic missiles to adjust their trajectories based on gravitational parameters to make them more accurate.

GEO IK-2 relies on Russia’s Rockot launch vehicle for its ride into a 99.4-degree orbit from where it can virtually map the entire planet and also study the movement of the poles.

Rockot, a re-purposed UR-100N Intercontinental Ballistic Missile, can be used as a space launch vehicle when topped by a Briz-KM upper stage to be able to loft over two metric tons of cargo to a Low Earth Orbit. Rockot stands 29.15 meters tall and has a main diameter of 2.5 meters and a launch mass of 107 metric tons. All of its stages use Unsymmetrical Dimethylhydrazine and Nitrogen Tetroxide as propellants.

Emerging from its above-ground launch container, Rockot completed a very short vertical ascent before swinging over to the north west. Rockot’s flight plan called for the vehicle heading out over the Arkhangelsk region before flying over the White Sea and Murmansk, heading out over the Barents Sea and then flying over Greenland prior to passing over Canada and the United States.

Powered by a package of three RD-0233 and one RD-0234 engines creating a total liftoff thrust of 190,700 Kilogram-force, Rockot was expected to quickly pass the speed of sound and encounter Maximum Dynamic Pressure 50 seconds into the flight.

Exhausting its supply of 71,500 Kilograms of toxic hypergolic propellants, the first stage was to depart the vehicle in a hot-staging sequence picking up at T+2 minutes and 12 seconds with the ignition of the RD-0236 four-chamber vernier on the second stage. Three seconds later, the pyrotechnic stage separation system was to be fired followed only one second later by the ignition of the RD-0235 vernier engine.

The 17.2-meter long first stage was to fall into the sea north west of Murmansk.

Heading uphill with a total thrust of 24,500 Kilogram-force, Rockot’s second stage was to fire for around three minutes, consuming 10,700 Kilograms of Nitrogen Tetroxide and Unsymmetrical Dimethylhydrazine. Passing 120 Kilometers in altitude, Rockot was to jettison its protective payload fairing, shedding unnecessary weight since the satellite can no longer be harmed by aerodynamic forces at that altitude.

Shortly after separation, Briz-KM was to ignite its settling thrusters in preparation for the first main engine burn that was tasked with delivering the stack to an elliptical transfer orbit with a 1,000-Kilometer apogee.

Ending its first engine firing, Briz-KM was to enter a coast phase to climb all the way to the apogee of its transfer orbit in order for the second burn to serve as circularization maneuver. This maneuver is expected to occur on a pass over the Indian Ocean and the island of Madagascar.

Firing the engine for about a minute, Briz-KM is tasked with bringing the perigee up to 1,000 Kilometers and inject the satellite into the target circular orbit.

Separation of the GEO IK-2 No.2 satellite is expected just shy of the T+2-hour mark when the vehicle will be in range of Russian ground stations. While the satellite goes through the motions of deploying its solar arrays and establishes communications with the ground, Briz-KM will conduct disposal maneuvers to enter an independent orbit where it will end its mission.