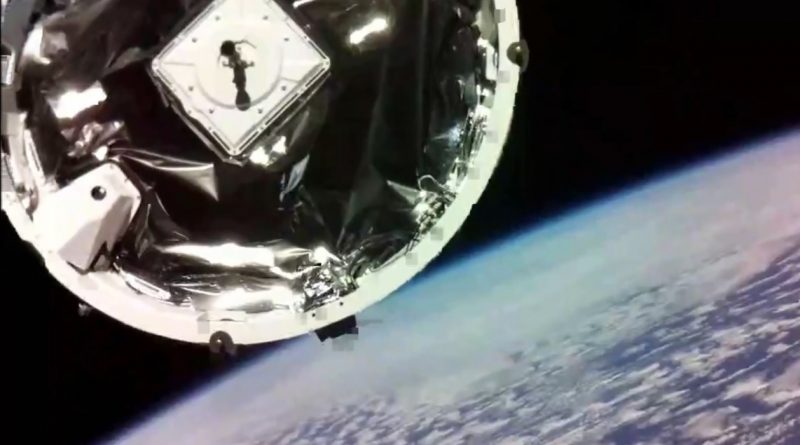 Rocket Lab – after successfully demonstrating the company’s Electron launch vehicle last weekend – had another surprise in store this week when revealing the mission had successfully executed an orbit circularization maneuver with a previously unknown Kick Stage and deployed a reflective satellite named “The Humanity Star”.

The company did not disclose the existence of this kick stage prior to Sunday’s demonstration flight, except through some hints in pre-flight communications of the launch team alluding to the presence of a Stage 3 on the Electron launcher, powered by an engine called Curie.

Electron ended a frustrating string of launch delays on Sunday, blasting off from its sea-side launch pad on New Zealand’s Mahia Peninsula at 1:43 UTC, 2:43 p.m. local time. Dubbed “Still Testing,” the mission built on Electron’s first flight performed in May 2017 and aimed to accomplish the final push into orbit after “It’s a Test” managed to show almost all critical flight events, but fell short of orbit when the flight had to be terminated due to degrading telemetry from the two-stage rocket caused by a misconfigured piece of communications equipment on the ground.


Rising into mostly-clear skies, the all-black Electron powered uphill with nine electric-pump-fed Rutherford engines generating 16,500 Kilogram-force of thrust when leaving the pad. The first stage fired for two and a half minutes before dropping away from the single-engine second stage to complete the final boost into orbit. The payload fairing dropped away just after the mission crossed three minutes and Electron headed into previously unknown territory after T+4 minutes when it passed the point of failure on its previous mission.

Applause erupted at Mission Control when the second stage dropped a depleted battery pack and continued flying on the straight and narrow toward a target orbit of 300 x 500 Kilometers, 83°.

The all-composite rocket achieved orbit a little over eight minutes after lifting off and a successful payload separation was confirmed by Rocket Lab. However, the company’s sign-off from their live launch broadcast was somewhat ominous, at least in hindsight: “We’ve got confirmation of payload deploy & orbit insertion which wraps up the initial part of our mission with a successful insertion into orbit.” This clearly suggested Electron’s job was not yet done, but the company was already able to celebrate the successful accomplishment of the mission’s primary objective and work through the experimental secondary mission without the public watching.


Initial clues of what Electron might have been up to arrived in the form of orbital tracking data, showing six objects related to this launch: three in a 292 by 530-Kilometer, 82.92-degree orbit and three in a circular orbit of roughly 500 by 535 Kilometers, inclined 82.93 degrees. This indicated Electron conducted orbital circularization after releasing an initial set of objects into the elliptical orbit that had been identified as the mission’s target beforehand. Rocket Lab said after Sunday’s launch that information on the additional objects would be forthcoming in the days after the mission.

On Tuesday, the company provided an update confirming that Electron – contrary to prior reports – was flying in a three-stage instead of a two-stage version with an in-house development serving as Stage 3. “Rocket Lab … has successfully tested a previously unannounced kick stage on the Still Testing Electron launch vehicle, using it to circularize the orbits of the two Spire Lemur-2 CubeSats on board,” the company said.

According to the company’s statement, Electron deployed the Dove Pioneer satellite into the elliptical orbit and the Kick Stage separated from the second stage shortly after orbital insertion. It then coasted for 40 minutes before completing the circularization maneuver with its Curie engine followed by the separation of the remaining satellites.

The demonstration of the Kick Stage shows Rocket Lab has an operational capability of executing multi-orbit missions, deploying payloads to different orbital altitudes to allow for greater flexibility and also afford small satellite operators an opportunity of independently setting their orbit, even if flying on Electron as rideshare payloads.

The Kick Stage employs a green propulsion system centered around the 120-Newton Curie engine which, like the larger Rutherford engines, largely relies on 3D printing. “Equipped with a precision pointing cold gas reaction control system, the kick stage also has its own avionics, power and communications systems,” Rocket Lab said in the company’s statement.


No specifics on the Kick Stage’s performance and design were provided by the company, though an image of the stage shows four spherical tanks containing the main engine propellants plus a single pressure vessel holding the attitude control system propellant. Various avionics boxes are installed around the stage’s inner perimeter.

Rocket Lab carried out research and development work under a DARPA contract for a novel high-density monopropellant which could be a possible candidate for the Kick Stage. This work was carried out several years ago and culminated in a series of ground-based static fire tests demonstrating the feasibility of the thixotrope propellant – consisting of solid granules suspended in a liquid to offer high storage efficiency.

In addition to multi-orbit deployments and circularization maneuvers, the Kick Stage will also be tasked with deorbiting itself or at least lowering its orbit to minimize its time in orbit before re-entry.

The presence of the Kick Stage explains five of the six objects related to this launch: Dove Pioneer and the Electron second stage are in the elliptical orbit while the Kick Stage and two Lemurs occupy the higher orbit. The third object in the lower, elliptical orbit remained unexplained until Wednesday when Rocket Lab announced “Still Testing” had carried a fourth payload, a small satellite called “The Humanity Star.”

According to Rocket Lab, The Humanity Star is a bright, blinking satellite “designed to encourage everyone to look up and consider our place in the universe.” The reflective satellite measures around one meter in diameter and is expected to last around nine months to a year before re-entering the atmosphere. Its geodesic form gives the satellite 65 individual reflective surfaces that will make it an interesting target for satellite observers. (Tracking information is available under thehumanitystar.com)

Introducing The Humanity Star – a bright, blinking satellite now orbiting Earth, visible to the naked eye in the night sky. Launched on #StillTesting, The Humanity Star is designed to encourage everyone to look up and consider our place in the universe. Website coming soon pic.twitter.com/wvIEcXelVk

Rocket Lab’s Electron is the first of several small orbital-class launch vehicles in development to take their share of what is an increasingly growing market – sending MicroSatellites or clusters of CubeSats into orbit. Electron is sized for the growing-small satellite market, capable of launching satellites of up to 150 Kilograms in single-payload SSO deliveries and lifting clusters of CubeSats. Rocket Lab plans to charge $4.9 million per Electron flight, significantly less than any other launch services provider currently in operation.

Sunday’s “Still Testing” mission marked a major step towards putting Electron into operational service, achieving a 100% successful flight in terms of meeting the goal of reaching orbit plus the added bonus of a Kick Stage demonstration. Rocket Lab will go through a detailed data review process to study exactly how Electron behaved on its way to orbit and whether there are any areas of improvement ahead of operational missions.

Rocket Lab said that, based on the successful Still Testing mission, the company will plan to accelerate into commercial operations, foregoing a third test flight that had been outlined as part of the initial plan when Electron was introduced. According to the company, the third Electron launch vehicle has finished production and successfully completed second stage acceptance testing via a Static Fire test. Electron #4 is also at an advanced stage of production, its engines were reported ready for shipment from Rocket Lab’s Huntington Beach, California factory to the Auckland, New Zealand assembly facility in mid-January.

The schedule for the first commercial Electron mission is not yet set in stone and will depend on the reviews after Still Testing. Rocket Lab has a number of launch contracts lined up on its 2018 manifest including a NASA cluster mission with over a dozen small satellites, a series of flights for San Francisco-based Planet and the company was also chosen by Moon Express for its lunar landers developed as their entry for the now-defunct Google Lunar XPRIZE.