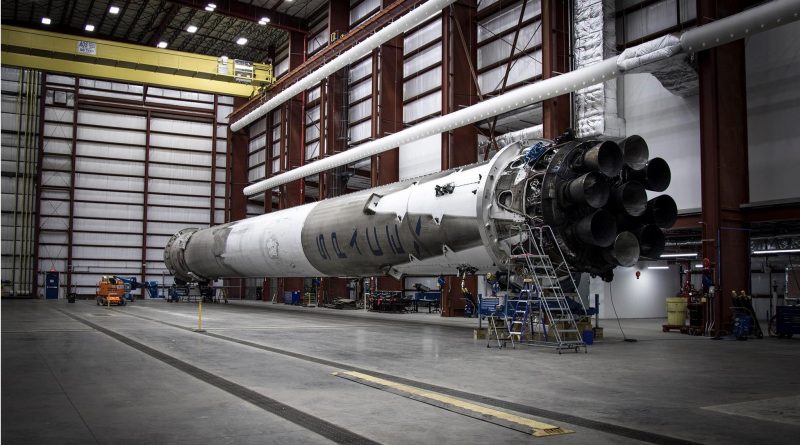 SpaceX conducted a Static Fire Test of the Falcon 9 booster that recently launched and returned to Florida’s space coast, becoming the first rocket stage to propulsively land after sending a payload on its way to orbit. The test, performed in the evening hours on Friday, marks another milestone for the company and its ongoing efforts to re-use rocket stages in the future with prospects of significant cost cuts for access to space.

SpaceX has been moving towards the ultimate goal of reusability since design work on the Falcon 9 rocket began. Initially experimenting with parachutes deployed from first stage boosters for a gentle splashdown in the ocean, SpaceX quickly turned to the much more complex technique of returning rockets under the power of their own engines – enabling them to return to the launch site for rapid refurbishment and re-use, a vision that started taking shape with the inauguration of a gradual series of improvements of the company’s Falcon 9 rocket – giving it the ability to re-start its engines, maneuver around in the rarefied upper atmosphere, guide its way back to a landing site by tilting and rotating four grid fins and coming to rest on four deployable landing legs, ideally without tipping over.


After the first soft-splashdown attempts delivered promising results, SpaceX had a pair of close calls when attempting to land on a floating platform deployed to the Ocean, known as the Autonomous Spaceport Drone Ship. Not being able to stick the landing on the drone ship, SpaceX upgraded to a landing attempt on land for its return to flight mission, coming back from the loss of the Falcon 9 lifting the Dragon CRS-7 mission.

The Falcon 9 booster blasted off from Cape Canaveral on December 21 and thundered into the night skies to deliver a group of 11 Orbcomm Second Generation Satellites to orbit. For the first stage, the primary task was done in less than two and a half minutes, sending the second stage on its way to make a perfect on-target delivery of the satellites. Following staging, the booster flipped around and boosted itself back onto a trajectory to the Space Coast.

Touching down on its four landing legs and under the power of its center engine less than ten minutes after lifting off, the first stage booster achieved a major milestone in SpaceX’s aspirations of rapid re-use. Coming to rest on its four legs atop the large concrete pad at Landing Zone 1 south of the launch pad, the first stage was safed and returned to a horizontal position atop a transporter. With its landing legs removed, the booster was moved to the Horizontal Integration Facility at Launch Complex 39A at the Kennedy Space Center where SpaceX is establishing its second Cape Canaveral launch facility.

Thorough inspections of the returned booster revealed that it was in excellent condition, despite having gotten a few shades darker – only requiring very few repairs. SpaceX CEO and Chief Designer Elon Musk said immediately after the successful return that the booster would not fly again, but will be put to the test in ground-based exercises before entering its second career as an exhibit.

For future Falcon 9 first stages, the goal is to establish a rapid and simple refurbishment procedure that will allow for a cost-effective re-use of boosters. Testing on the first booster making it back intact is necessary to gather information on the condition of a returned booster and the performance of its engines after a full ascent-descent cycle. Assessing the stage during repeated cryo-cycles is also a consideration when looking at re-use.

Initially, it was understood that the booster would be the first to roll out to the pad at LC-39A to put the Transporter Erector and ground systems through initial testing as the propellant handling systems received major modifications after the retirement of the Space Shuttle to prepare for launches of SpaceX’s Falcon 9 and Falcon Heavy rockets.

However, testing at LC-39 was not first on the agenda for the booster as it returned to Space Launch Complex 40 this week to complete a Static Fire Test. No reason for the switch to SLC-40 was provided by SpaceX, but it is likely that the company wanted to give the propellant handling systems at the facility another run-through given the complications encountered during the Orbcomm launch campaign related to the use of sub-cooled Liquid Oxygen Propellant – a requirement of the upgraded Falcon 9 Full Thrust version.

Placed in a vertical posture atop the Launch Mount by a crane, the booster was loaded with propellants on Thursday in a first Static Fire attempt that ended with a countdown abort due to problems related to the ground system, again showcasing the need for additional exercises of the systems to fine-tune the modified propellant loading procedure in which over 400 metric tons of sub-cooled Liquid Oxygen and chilled Rocket Propellant 1 have to be pumped into the first stage in a period of just 32 minutes.

Friday’s countdown went smoothly, leading up to a brief ignition of the nine Merlin 1D engines around 8p.m. local time, 1 UTC on Saturday. The successful ignition of the booster was confirmed by SpaceX’s Vice President of Mission Assurance Hans Koenigsman at the pre-launch briefing for the Jason-3 mission, set to become Falcon 9’s second West Coast launch this weekend.

The booster will likely make room for the next operational Falcon 9 rocket in the coming days as the SLC-40 facility has to be turned around for the launch of the SES-9 communications satellite currently aiming for early February. SpaceX will get its next chance to recover a Falcon 9 booster this weekend on the Jason-3 launch which will make use of the Autonomous Spaceport Drone Ship deployed to the Pacific Ocean.

Perfecting the landing on the Autonomous Spaceport Drone Ship (ASDS) is a necessity for SpaceX to succeed in its business model of re-using first stages since not all missions have sufficient propellant reserves to aim for a landing on shore. Although Jason-3 uses the final Falcon 9 v1.1 rocket which will not be re-used, SpaceX hopes to gather more data needed for mastering the return to the drone ship and possibly get another booster back for post-flight checkouts.

SpaceX aims to return a number of first stages this year – to land and sea-going platforms – in order to begin the process of verifying the procedures needed to re-use flown boosters. Building on Friday’s test firing, the company hopes to be able to begin offering flown Falcon 9 rocket stages by the end of the year, aiming for a re-flight of a stage in the not too distant future.