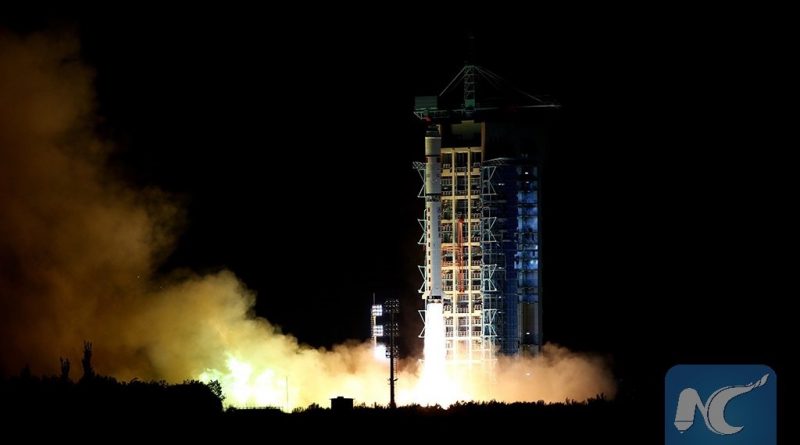 China sent a ground breaking scientific experiment into orbit on Monday to build the foundation for secure communications technology of the future.

The Quantum Science Satellite – nicknamed Micius – is the first spacecraft to establish quantum communications between space and Earth by creating entangled photon pairs over great distances and testing the principles of quantum teleportation.

The Long March 2D rocket carrying the Micius satellite lifted off from the Jiuquan Satellite Launch Center in the Gobi desert at 17:40 UTC and successfully reached orbit within ten minutes of liftoff, sending the spacecraft on an ambitious demonstration mission of at least two years.

Quantum Information Science is an emerging field driven by fascinating physics and many promising applications including high-speed quantum computers and ultra-secure quantum communications. Quantum Key Distribution allows cryptographic keys to be transmitted by means of correlated, or entangled photons – particles of light.


Quantum communications between two parties are inherently secure because any eavesdropping by a third party would cause the quantum state of the entangled photons to collapse, making their presence known to the rightful operators of the communications bridge. To achieve this perfect security, two parties share an encryption key encoded in the polarization of a string of entangled photons.

The theories of quantum mechanics postulate that the properties of entangled photons remain entwined over any distance. But in practice, quantum communications have only been possible over distances of a few hundred Kilometers because optical fibers and Earth’s atmosphere scatter and absorb photons. Transmitting an optical signal through the vacuum of space and using a satellite as relay could enable communications on a global scale which is exactly what Micius will prove.

The basic working principle of the Quantum Science Satellite revolves around a crystal that generates pairs of entangled photons whose properties remain coupled to one another however far apart they are. A high-fidelity optical communications system is then responsible for delivering the partners of the entangled pairs to optical ground stations in Vienna, Austria and Beijing, China where their polarization properties will be used to generate a secret encryption key.

Quantum communications represents the space race of the 21st century given the technology will uncover any tinkering and eavesdropping in the exchange of information between two parties – making it attractive for national security needs and intelligence agencies.

Efforts in the field of quantum communications are being made by teams in Italy, Canada, Japan and Singapore. Small satellite missions have already proven that entangled photon pairs can be generated in space, but no spacecraft has established a long-distance quantum channel between itself and a ground station on Earth – at least to public knowledge. The U.S. is likely developing its quantum communications systems as part of classified national defence projects.

The Micius satellite weighs in at 600 Kilograms and is outfitted with a crystal that generates entangled photons, a key communicator, entanglement emitters and a high-speed coherent laser communicator used to lock onto ground stations. The satellite was named after Chinese scientist and philosopher Micius who, over 2,000 years ago, discovered that light travels in straight lines.

If successful, China’s quantum communications pathfinder might fuel the development of similar projects in other countries as the world accelerates toward the age of the quantum internet.

Also aboard the Long March 2D rocket on Monday’s mission were two co-passengers that have yet to be identified.