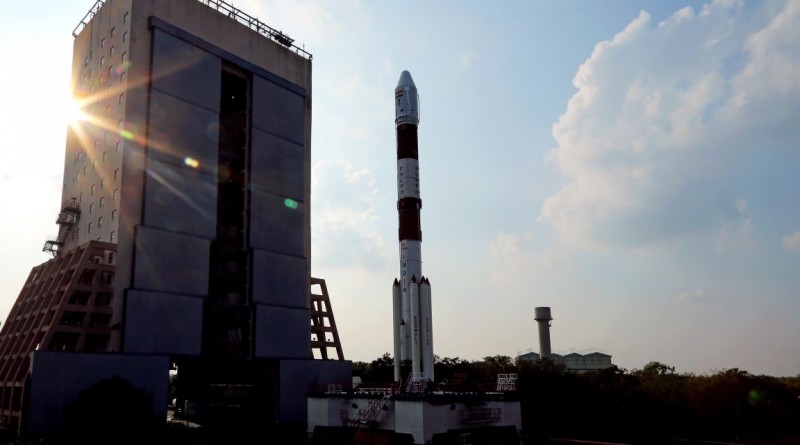 India’s Polar Satellite Launch Vehicle is standing tall atop its launch pad for liftoff on Wednesday at 4:01 UTC with the fifth satellite in the Indian Regional Navigation Satellite System. PSLV, flying in its XL configuration with six strap-on boosters, will be tasked with a 19.5-minute ascent mission into a sub-GTO orbit from where the satellite will make its way into Geosynchronous Orbit, joining the four satellites launched in the last two and a half years.

The Indian Regional Navigation Satellite System is planned to reach its fully operational capability later this year when its seventh satellite is launched, delivering navigation services to the Indian territory and surrounding areas. Unlike other navigation systems such as GPS, the Russian Glonass, Chinese Beidou and Europe’s Galileo that all provide global coverage, IRNSS is designed to only deliver regional services – reducing the number of satellites in the constellation.

IRNSS has been initiated to provide India with independent access to navigation data without relying on the aforementioned foreign programs. The system uses seven satellites – four in inclined Geosynchronous Orbits and three in Geostationary Orbit above the equator to deliver continuous services to its service area.

The system is designed to be compatible with the US Global Positioning System and Europe’s upcoming Galileo constellation using navigation signals in S-Band and at L5. The deployed constellation will only cover India and surrounding regions with high-accuracy services available about 1,500 Kilometers beyond the Indian territory.


IRNSS-1E weighs in at 1,425 Kilograms, including over 800kg of maneuvering propellant, and is outfitted with a highly accurate Rubidium atom clock that is used to generate the precise timing needed for conditioning navigation signals. The Spacecraft will support Standard Positioning Service that is open to all users as well as Restrictive Service with high accuracy that is only provided to authorized users. The system will provide an accuracy of 10 to 20 meters.

After IRNSS-1E begins operation, the satellite constellation will enter its Initial Operational Capability phase with first services being provided to users.

Build-up of the four-stage PSLV XL rocket was completed last year. PSLV makes use of a combination of solid-fueled and liquid rocket engines, taking advantage of the raw power of solid propellants and the maneuverability and accuracy of liquid-fueled engines.

Launch vehicle integration started with the assembly of the large first stage, a 20.34-meter long Solid Rocket Motor that is 2.8 meters in diameter and has a mass of 168,200 Kilograms. Once the first stage segments were stacked, it had its six Solid Rocket Boosters installed, each being 13.5 meters long and one meter in diameter with a mass of about 14 metric tons.

The next step was the installation of the second stage, a liquid-fueled stage – 12.8 meters long and 2.8 meters in diameter with a mass of 46,000 Kilograms, sporting a single Vikas engine.

Stacked atop the second stage, PS3 is again solid-fueled, measuring 2.02 meters in diameter and 3.54 meters in length with a mass of 7,800 Kilograms. Finally, the 2.6-meter long liquid-fueled fourth stage was installed on the stack, is powered by a pair of L-2-5 engines consuming two metric tons of propellant.

With PSLV assembled, an extensive set of tests was performed before the IRNSS-1E satellite was mated atop the fourth stage and the rocket was rolled to its launch pad. Final clearance for the long two-day countdown operation was given on Sunday when the Mission Readiness Review and Launch Authorization Board confirmed the readiness of all systems for Wednesday’s mission, to kick off a year with up to eight launches of PSLV and the larger GSLV.

Countdown operations started at 4:01 UTC on Monday as part of a 48-hour sequence that is filled with a number of operations to configure the rocket for flight. The lengthy countdown procedure includes propellant loading on the liquid-fueled stages and extensive checkouts of the rocket and spacecraft as well as preparations of India’s Ground Network of Tracking Stations needed for the flight and the initial operations of the spacecraft once in orbit.

Beginning countdown operations, teams started the hazardous process of loading the fourth stage with Monomethylhydrazine fuel which was completed within about six hours allowing teams to transition to oxidizer loading on the fourth stage that is being filled with MON-3 (Mixed Oxides of Nitrogen) in the evening hours on Monday. The next tanks to be filled will be the Roll Control Thruster tanks on the first stage that also receive MMH and MON-3 propellants. On Tuesday, the second stage will receive its propellant load – 40,700 Kilograms of Unsymmetrical Dimethylhydrazine and Nitrogen Tetroxide.

On Wednesday, over the final hours of the countdown, teams perform hands-on work to close out the launch vehicle and launch pad facilities while the launch team monitors all systems of the launcher and the spacecraft, putting the vehicle through a last set of electrical, communications and control systems checks before pressing into the final countdown sequence. Also, the Mobile Service Structure will be rolled back to its launch position.

Teams will evacuate the launch area for the final countdown operation that includes a set of testing operations on the electrical and flight control system of the PSLV that also receives its software for the 19.5-minute ascent mission. Over the final minutes of the countdown, the launcher pressurizes its propellant tanks for flight, transitions to internal power and enables its flight control system in launch mode for PS1 ignition at T-0.

The massive first stage will continue firing, delivering 496 metric tons of thrust as it burns through 138,000 Kilograms of solid propellant in just 105 seconds, lofting the vehicle to an altitude of 56 Kilometers and a speed of 2.4km/s. Separation of the first stage is expected one minute and 51 seconds into the flight with second stage ignition an instant later. The Vikas 4 engine of the second stage will soar up to a thrust of 81,500 Kilogram-force for a burn of just over 2.5 minutes. Starting the second stage burn, the vehicle will transition from a pre-determined attitude profile flown during PS1 to Closed Loop Control to dynamically adjust its flight profile based on measured navigation data in order to meet its cutoff targets.

At T+3 minutes and 18 seconds, the vehicle will have reached an altitude of 112 Kilometers, making it safe to separate the protective payload fairing since aerodynamic forces no longer present a danger to the satellite at that altitude. The second stage will conclude its burn and separate at T+4:23, reaching an altitude of 134 Kilometers and a speed of 5.37km/s.

Third stage ignition occurs one second after staging, starting a burn of 113 seconds during which the stage will deliver 24,900 Kilogram-force of thrust. After burnout of the third stage, PSLV will keep holding onto the stage for the nominal Stage 3-4 coast phase that is designed to allow the stack to gain altitude ahead of the fourth stage burn. It also allows the third stage to tail off any residual thrust to ensure a safe separation. The coast lasts from T+6:17 to T+10:06, a period during which the stack climbs from 137 to 186 Kilometers.

IRNSS-1E will be separated from the PSLV at T+19 minutes and 20 seconds at an altitude of 503 Kilometers and an insertion speed of 9.6km/s.

Very shortly after separation, the satellite will deploy its two power-generating solar arrays, establish communications with ground stations and stabilize its three-axis orientation. Over a period of days, the spacecraft will complete four burns of its Liquid Apogee Motor to insert itself into a Geosynchronous Orbit at 111.75 degrees East and an inclination of 28.1 degrees.