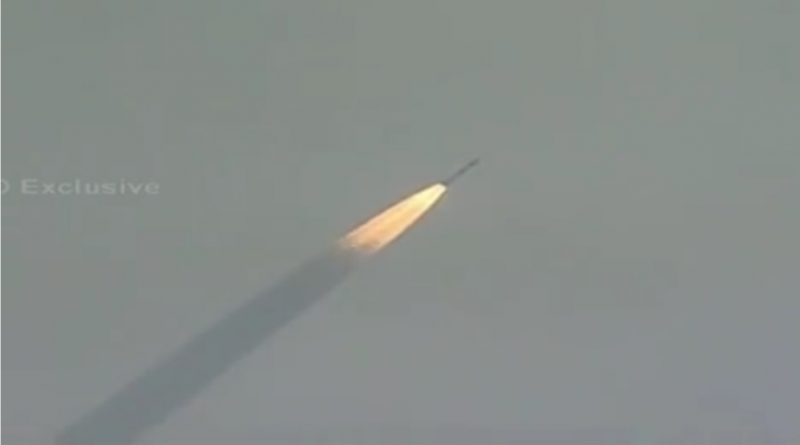 India’s Polar Satellite Launch Vehicle rumbled skyward Monday morning, carrying the country’s first dedicated astronomical observatory to orbit. Liftoff from the Satish Dhawan Space Center took place at 4:30 UTC as PSLV thundered away, powered by its solid-fueled core stage and boosters. Sticking to an easterly departure path, PSLV was aiming for an equatorial orbit 650 Kilometers in altitude for the release of AstroSat and six secondary payloads 25 minutes after liftoff.

AstroSat, weighing in at 1,513 Kilograms, uses a well-proven spacecraft bus that had been used in numerous Indian Earth Observation missions since the early 1990s, but AstroSat will be its first application in astronomy, pointing away from Earth to peer into the depths of the universe.

The satellite is outfitted with five co-aligned payloads comprised of ultraviolet imaging telescopes and X-ray sensors, covering a large area of the high-energy spectrum for a range of scientific multi-band studies from X-rays over ultraviolet radiation to the visible wavelengths. The observations will particularly focus on Active Galactic Nuclei, binary stars, flaring stars, star clusters and more. X-ray observations will be made across a broad energy band with high resolution using three co-aligned instruments. Time-resolution achieved by the AstroSat instruments will allow for the study of periodic, aperiodic and chaotic X-ray binaries and their pulse and orbital periods. Furthermore, AstroSat will deliver UV data for morphological studies of a number of targets to deliver additional spectral information.

The PSLV rocket headed into its typical three-day countdown on Saturday to facilitate the propellant loading operation on the liquid-fueled stages of the rocket. The working principle of PSLV is the combination of Solid Rocket Motors and liquid-fueled stages to make use of the advantage of both – the raw power of solid rockets to increase payload performance and the precision of liquid-fueled engines to deliver the payload to its target orbit – a feat achieved with remarkable accuracy on all recent PSLV launches.


Flying in its XL configuration, PSLV consists of the standard PS1 first stage that has six stretched boosters attached to it and a liquid-fueled second stage atop which sits the solid third and the dual-engine liquid-fueled fourth stage. Overall, the rocket stands 44.5 meters tall, has a diameter of 2.8 meters and a liftoff mass of 320,000 Kilograms.

Heading into the countdown, PSLV went through fueling on the roll control thrusters of the large Core Stage, the second stage and the small fourth stage. Propellant loading was completed by Sunday evening, clearing the way for the retraction of the Mobile Service Tower that revealed the 14-story rocket on its pad, eagerly awaiting liftoff. Dozens of launch controllers watched over the rocket as final checkouts and reconfigurations were made leading up to the 12-minute automatic countdown sequence that was committed upon completion of verifications of all ground stations, support systems and launch vehicle systems.

With the Master Sequencer in control of the countdown, the PSLV Flight Computer was transitioned to its flight mode, receiving the proper flight coefficients for the mission.

Three minutes prior to launch, PSLV made its transition to battery power and started the pressurization of its second and fourth stage tanks for liftoff. At T-1 minute, the onboard Master Sequencer assumed control of the final countdown events with the Real-Time Program beginning execution at T-30 seconds.

Three seconds ahead of T-0, the hypergolic Roll Control Thrusters on the first stage ignited to be used during first stage flight to keep the roll rate of the vehicle in the appropriate corridor. When clocks hit zero, the PS1 stage was commanded to ignite. Two pairs of boosters were ignited at T+0.42 and T+0.62 seconds.

PSLV leapt of its pad at 4:30 UTC on Monday, powered by the massive core stage and four-ground lit boosters that delivered a collective liftoff thrust of 700 metric-ton-force – making for a fast initial climb during which the vehicle balanced in a vertical posture. A few seconds after liftoff, PSLV pitched and rolled to get aligned with its departure path, sticking to the nominal flight trajectory normally used for Geostationary Transfer missions taking the vehicle to the south-east. At this point in the mission, the rocket consumed 1,600 Kilograms of solid propellant.

At T+25 seconds, PSLV commanded the remaining two boosters to ignite to increase its total thrust to 803 metric ton-force. Tracking data showed the vehicle on a good ascent trajectory as it headed through Mach 1 and encountered Maximum Dynamic Pressure.

The 13.5-meter long ground-lit boosters burned out 50 seconds into the flight after consuming 12,000 Kilograms of propellant. To ensure a safe impact in the ocean, PSLV held the boosters for another 20 seconds before separating them in pairs at an altitude of 25 Kilometers. The air-lits tailed off at T+1 minute and 15 seconds and departed the vehicle at T+1:32 when PSLV was already traveling over 2 Kilometers per second.

With the six boosters tumbling back to Earth, PSLV relied on its S139 core stage alone, generating 496 metric tons of thrust and burning through 138 metric tons of propellants. Overall, the stage stands 20.34 meters tall with a diameter of 2.8 meters using two Roll Control Thrusters and a Secondary Injection Thrust Vector Control system for three-axis attitude control.

One minute and 45 seconds into the flight, thrust on the core began declining and was followed by staging at T+1:51.9 using a series of pyrotechnic charges that cut the connection between the stages. Ignition of the Vikas engine of the second stage was confirmed at T+1 minute and 53.8 seconds when the rocket was 65 Kilometers in altitude, going 2.3km/s.

Reaching its operational thrust of 81,500 Kilogram-force, Vikas 4 was set to continue powered flight for a little over two and a half minutes. The second stage of the PSLV is 12.8 meters long and capable of holding 40,700 Kilograms of Unsymmetrical Dimethylhydrazine fuel and Nitrogen Tetroxide oxidizer. The Vikas 4 engine operates at a chamber pressure of 58.5 bar, consuming 278 Kilograms of propellant per second.

Just over three seconds into the burn of the second stage, the Flight Control System of PSLV transitioned to Closed Loop Control. A pre-programmed attitude profile was flown during first stage flight when PSLV was traversing the dense layers of the atmosphere where it was facing upper level winds. Now beginning to use its own navigation platform, PSLV was dynamically adjusting its ascent path to correct for any errors created during the initial stage of the flight.

The payload fairing was discarded at T+2 minutes and 49 seconds when PSLV passed 114 Kilometers, exiting the dense atmosphere. No longer in danger of being harmed by aerodynamic forces, the seven satellites sitting atop the rocket were exposed for the rest of their way into orbit.

The second stage shut down and separated four minutes and 22.5 seconds into the flight, having accelerated the rocket to 5.3km/s. Third stage ignition came just over one second later as the solid rocket motor began firing with a total thrust of 25,000kgf. Carrying 6,700 Kilograms of propellant, the third stage burned for 112 seconds, further boosting the vehicle’s velocity to around 7.5km/s – nearly orbital velocity.

After burnout of the third stage, the vehicle held the stage for another three and a half minutes to allow residual thrust to tail off, thus ensuring a clean separation from the fourth stage that came at T+5 minutes and 47 seconds.

For the upper stage, the coast was not over because this mission required an extended coast phase to allow the vehicle to reach the apogee of the 650-Kilometer sub-orbital trajectory. Ignition was confirmed at T+16:54 with the two L-2-5 engines up and running to deliver 1,500kgf of thrust, burning hypergolic propellants. Burning out of plane, the fourth stage conducted the yaw-steering needed to reduce the orbital inclination from around 17 degrees to 6°. The burn lasted for exactly five minutes, leaving the stack in an orbit of 649.6 by 650.6 Kilometers inclined 6.00 degrees, according to the onboard navigation sources of the vehicle.

As is typical with PSLV, spacecraft separation followed swiftly after shutdown. AstroSat was the first to be released with separation coming at T+22:31 to send the craft on its way to perform a five-year science mission looking deep into the universe to study high-energy sources.

Next to be sent on its way was LAPAN-A2, the first Indonesian-built and operated satellite – released by the PSLV at T+23:01. The satellite carries two video cameras to capture high-resolution Earth imagery, a ship-tracking payload and a communications terminal to provide support in disaster mitigation efforts.

NLS-14 also known as exactView-9 was separated 23 minutes and 28 seconds after launch to be operated by exactEarth that collects global shipping information for commercial customers.