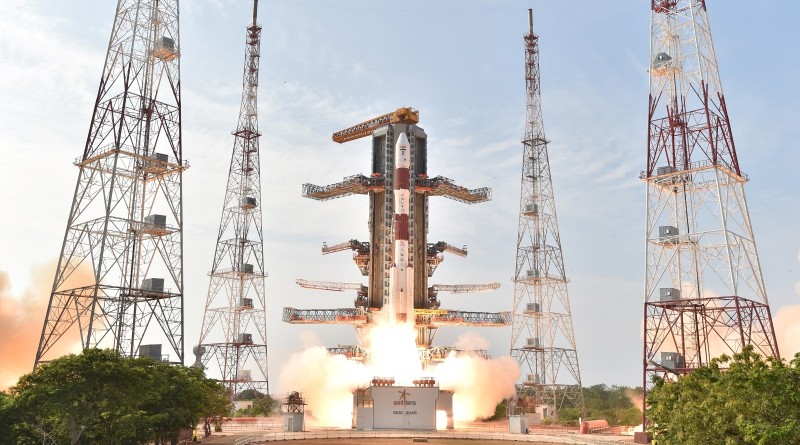 India’s Polar Satellite Launch Vehicle blasted off on Thursday, lifting into orbit the IRNSS-1F satellite set to become a part of the Indian Regional Navigation Satellite System. IRNSS is in the final stages of a three-year deployment with the last of seven satellites lined up for launch in April to establish the fully operational constellation.

PSLV, flying in its most powerful XL configuration, jumped off its launch pad at 10:31 UTC for a twenty-minute climb to a Sub-Synchronous orbit from where the satellite will make its way to Geostationary Orbit. The four-stage PSLV delivered a flawless performance, separating the satellite into its target orbit to mark the start of a ten-year mission.


The IRNSS-1F satellite, the sixth in the series, weighs in at 1,425 Kilograms and sets sail to enter the constellation at 32.5°E in Geostationary Orbit, the most westerly slot in the satellite fleet. IRNSS includes three spacecraft in GEO and two pairs of satellites in inclined Geosynchronous Orbits spread from 32.5°E to 132°E. This setup enables IRNSS to cover the Indian territory, extending about 1,500 Kilometers beyond the country’s borders.

Unlike other navigation systems such as Glonass, GPS and Galileo, the Indian Regional Navigation Satellite System has been designed to employ a simple design with only seven satellites in orbit instead of close to 30 needed to achieve round-the-clock global coverage. Deployment of IRNSS began with the 1A satellite in July 2013 and the pace of launches has picked up towards the end of deployment to establish the satellite constellation in its fully operational configuration by the end of the first half of 2016.

IRNSS has been designed to be compatible with the American Global Positioning System as well as Europe’s Galileo constellation using navigation signals in S- and the L5-Band. Each of the IRNSS birds hosts a highly accurate Rubidium atomic clock in charge of providing precise timing solutions needed for the generation of navigation signals. The IRNSS system offers a standard service free of charge while a Restricted Service with improved accuracy is available to authorized users such as the government and military as well as special applications of the system. IRNSS reaches an accuracy of 10 to 20 meters.

The inauguration of the IRNSS-1E satellite marked the start of Initial Operational Capability of the constellation for further testing and refinement of navigation signal generation. Making a dash to the finish line, ISRO aims to deliver the seventh and last IRNSS-1 satellite to orbit in April and achieve the constellation’s Full Operational Capability by the end of the first half.

The launch facility was turned around rapidly after the IRNSS-1E satellite left the pad in January with the next PSLV rocket being assembled in February and topped with IRNSS-1F by early March to be ready for Thursday’s mission.

PSLV, India’s flagship rocket in operation since the 1990s, makes use of a combination of the raw power of solid rocket stages and the precision & maneuverability of liquid-fueled engines. The 44.5-meter tall launch vehicle can look at nearly 30 successful missions in a row, having demonstrated a very precise insertion capability in recent years.

To lift IRNSS-1F, PSLV flew in its XL configuration, that – despite being the most powerful version of the rocket – can not deliver satellites to conventional Geostationary Transfer Orbits. IRNSS-1F was aiming for a subsynchronous orbit from where it has to use its own engines to maneuver up to GEO.

The 320-metric-ton PSLV headed into a long countdown on Tuesday and entered propellant loading on the second and fourth stages as well as the first stage roll control thrusters – all filled with a mix of hypergolic propellants. Tanking wrapped up in the late evening hours on Wednesday and PSLV headed into its final countdown sequence, being closed out for liftoff as the Launch Team assumed control of the vehicle for final checks and reconfigurations.

PSLV was revealed on its pad when the Service Platforms were retracted and India’s tracking network was configured for liftoff as teams headed into final status checks. With a clean bill of health, PSLV initiated its terminal countdown sequence at T-12 minutes to pass its four stages to battery power, pressurize the tanks and arm the various igniters and pyrotechnics of the rocket before the Real Time Program kicked in to take the vehicle through the final steps ahead of ignition.

Three seconds to of T-0, PSLV started its two Roll Control Thrusters followed by the ignition of the first stage when clocks hit zero. The four ground-lit boosters were ignited in close succession at T+0.4 and T+0.6 seconds, giving PSLV a total liftoff thrust of 700 metric-ton-force when departing its pad at 10:31 UTC.

With a high thrust-to-weight ratio of 2.2, PSLV jumped off its pad and completed a short vertical ascent before swinging to the south east, burning through 1,600 Kilograms of propellants every second of powered flight. Beginning its flight over the Indian Ocean, PSLV kicked in the afterburners 25 seconds into the flight when the remaining two boosters ignited, increasing the vehicle’s total thrust to over 800 metric ton-force.

Each 13.5 meters long and weighing in at 14 metric tons, the boosters fired for 50 seconds. As thrust tailed off on the ground-lits, PSLV held them for another 20 seconds to ensure residual thrust fully dissipated before separation 24 Kilometers in altitude. The two air-lit boosters followed suit at T+1 minute and 32 seconds, leaving the PSLV flying uphill under the power of the 20.3-meter long PS1 stage alone.

The core stage consumed 138 metric tons of propellants in one minute and 49 seconds when thrust tailed off. Stage separation occurred as soon as the declining chamber pressure on the first stage was sensed, occurring 56 Kilometers in altitude after PS1 accelerated the stack to 2.4 Kilometers per second.

Ignition of the Vikas 4 engine on the second stage was confirmed split-seconds after staging as the engine soared to 81,500 Kilogram-force of thrust. Seconds into the burn of the PS2 stage, Closed Loop Guidance was enabled, allowing the launch vehicle to adjust its flight profile based on measured navigation data. For the flight through the atmosphere, powered by the first stage PSLV used a pre-programmed attitude profile.

Guzzling down 40,700 Kilograms of hypergolic propellants, the second stage was in charge of powered flight for two and a half minutes. Three minutes and 15 seconds into the flight PSLV passed 113 Kilometers in altitude, creating safe conditions for the separation of the payload fairing, revealing the IRNSS satellite for the rest of the trip into orbit.

The second stage finished its job four minutes and 21 seconds after liftoff and separated from the stack to clear the way for the PS3 stage to ignite its solid rocket motor 1.2 seconds after staging. Starting out 135 Kilometers in altitude, the PS3 stage was tasked with raising the vehicle’s velocity from 5.4 km/s to 7.7km/s over a burn of one minute and 52 seconds.

After delivering 25 metric-ton-force of thrust for just under two minutes, thrust on the third stage tailed off and PSLV headed into a coast phase of four and a half minutes, inserted in the flight profile to create the appropriate conditions for the orbital insertion conducted by the fourth stage. During the coast, the vehicle held the third stage to make sure all residual thrust tailed off before separation.

Having climbed to 190 Kilometers, PSLV dropped its third stage just before hitting the T+11-minute mark followed ten seconds later by ignition of the twin L-2-5 engines of the fourth stage, soaring to a thrust of 1,500 Kilogram-force for a burn of eight and a half minutes, tasked with boosting the satellite into the desired elliptical orbit.

PSLV hit the mark at T+19 minutes and 41 seconds, shutting down it engines, having arrived in an orbit of 284 by 20,652 Kilometers at the desired inclination in another remarkably precise orbital insertion.

IRNSS-1F was released just after T+20 minutes, starting a mission of at least ten years as part of India’s independent navigation system.

Arriving in orbit, IRNSS-1F was expected to deploy its two power-generating solar arrays, establish communications with the ground and enter a stabilized orientation in space.

It will take a period of several days for the satellite to conduct multiple firings of its Liquid Apogee Motor to raise perigee and apogee to Geostationary Altitude and reduce the orbital inclination to zero in order to take its spot in Geostationary Orbit. One maneuver using the Liquid Apogee Motor will be conducted at perigee to boost the apogee followed by three maneuvers that are done to raise the perigee and take up station at 32.5°E.

Following more checkouts, the satellite will activate its navigation payload alongside the five previously launched satellites that are already active, to be joined in just over a month by IRNSS-1G, currently looking at a mid-April launch target.