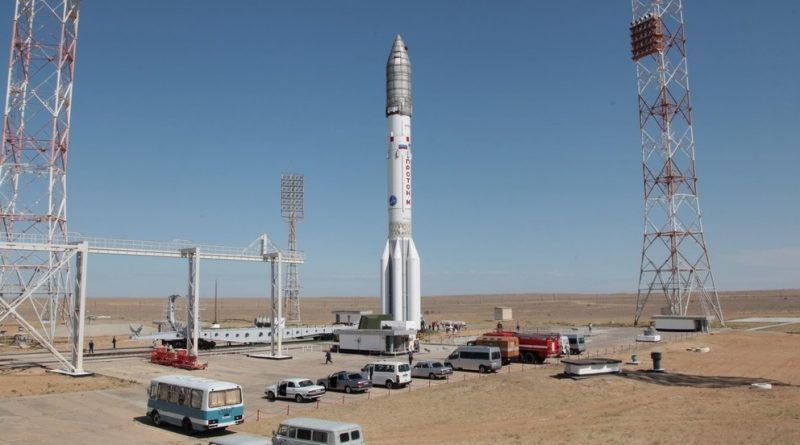 Russia’s Proton-M rocket is set for liftoff from the Baikonur Cosmodrome Wednesday night on a semi-secret mission with the first of four planned Blagovest satellites building a communications infrastructure “for Russian domestic use.”

Liftoff from Site 81/24 appears set for 22:07 UTC on Wednesday, 4:07 a.m. at the Kazakh launch site with no live coverage to be expected given the lack of pre-launch updates from the Roscosmos State Corporation.

Blagovest 11L was built by Russia’s ISS Reshetnev using the company’s large Ekspress-2000 satellite platform while the craft’s communications platform was built by Thales Alenia Space. The program is operated by the Russian Ministry of Defence, explaining the secrecy under which the mission moved to the launch pad; however, satellite manufacturer ISS Reshetnev also advertises the satellite for civilian services like TV and radio distribution, broadband Internet access, data-intensive services and video conferencing.

Documentation by Thales Alenia confirms Blagovest uses Q-Band filter equipment and Ka-Band input multiplexers from the company and a presentation by Spanish Company RYMSA also shows the satellite as having a C-Band payload which does not show up in ISS Reshetnev documents.

The Extremely High Frequency (EHF) Q-Band has been studied extensively for high-throughput satellite programs in which the feeder links (satellite to ground gateway & vice versa) would use Q-Band to free up additional user bandwidth in Ka-Band. However, communications at these higher frequencies are susceptible to atmospheric fluctuations like areas of bad weather as rain can attenuate the millimeter-wavelength signals – requiring mitigation either through using multiple ground hubs or adaptive coding and modulation (ACM) techniques.


Seen as the future for high-bandwidth communications, Q/V-Band systems have already found some early adapters in industry and government.

Commercial satellite operator Eutelsat launched an experimental Q/V-Band payload aboard the Eutelsat 65 West A satellite last year to acquire additional insights to enhance the reliability of communications in the EHF spectrum. Eutelsat confirmed it had successfully completed multiple test communications with the 40-50GHz payload.

A number of telecommunications providers and satellite operators have already expressed interest in exploring EHF communications as part of their long-term business models – firms interested in the technology include GEO satellite giants like Eutelsat & Intelsat as well as operators exploiting Low and Medium Earth Orbit, namely Iridium, OneWeb and O3b. Blagovest is the first known application of Q-Band for fully operational services on a Russian satellite.

The launch of the Blagovest 11L mission had been floating around the Russian launch manifest for the better part of a year – initially targeting liftoff in the second half of 2016 before slipping into 2017 due to an extended stand-down in Proton launch operations due to systemic issues discovered in the rocket’s engines that required a recall of dozens of engine units before boosters could be re-fitted with refurbished powerplants.

The final launch campaign for the mission was also anything but smooth, overcoming technical and regulatory hurdles to move Proton to the launch pad. ISS Reshetnev announced on July 3 that Blagovest had reached the Baikonur launch site and was entering a final processing campaign to undergo checkouts and propellant loading before meeting its Proton-M/Briz-M launch vehicle.

On the launcher side, many long nights were worked to deal with issues on the first stage and urgent air deliveries from Moscow came in with replacement avionics boxes as the ones installed on Proton were found to be faulty, according to reporting by RussianSpaceWeb.com. An additional hurdle cleared just in time was a regulatory issue as Launch Pad 24 had only been certified for use until July 31, 2017 – requiring waivers to clear the pad for another two years of use. Documentation was signed on August 10 and cleared the way for rollout of the launch vehicle on Sunday.


Wednesday night’s Proton launch will be only the second flight of the Russian workhorse this year, following the commercial EchoStar-21 mission on June 8 that closed a year-long gap after a close call on the Intelsat 31 mission which eventually led to the discovery of widespread engine problems.

As a military-operated mission, Wednesday’s launch is unlikely to be broadcast live and details on the progress of the mission will be sparse until a confirmation of launch success is provided by the Russian Ministry of Defence several hours after liftoff.

Proton-M stands 58.2 meters tall and measures 7.4 meters in diameter with a launch mass of 712 metric tons, holding some 622 metric tons of toxic Unsymmetrical Dimethylhydrazine and Nitrogen Tetroxide, loaded into the three-stage launcher six hours before liftoff. The Briz-M, serving as upper stage, was loaded with its own supply of 20 metric tons of hypergolics prior to the rocket’s rollout to Site 81/24.

Firing up its six RD-275M engines, Proton will thunder off with a liftoff thrust of over 1,000 metric-ton force, climbing vertically before turning to the north-east to depart Baikonur along the standard 61.3-degree launch azimuth for Proton missions with Geostationary Satellites.

Proton’s 21.2-meter long first stage with its internal oxidizer tank and six characteristic fuel tanks clustered around it will be in operation for the first minute and 58 seconds of the flight, burning 419,400 Kilograms of propellants before handing over to the second stage. Firing up its four RD-0210/0211 engines, the second stage will continue pushing Proton toward space with a thrust of 244 metric tons.

Separation of the second stage will be assisted by the third stage’s four-chamber vernier engine, occurring five minutes and 27 seconds into the flight after the second stage consumed 156 metric tons of propellant. The RD-0213 main engine will light up on its four minute burn four seconds after staging and Proton will drop its protective payload fairing another 15 seconds later when aerodynamic forces are no longer a concern.

Burning 46,600kg of propellants and delivering 62,600 Kilogram-force of thrust, the third stage will be tasked with placing the stack onto a sub-orbital arc, handing off to the Briz-M upper stage nine minutes and 42 seconds after launch for a multi-burn, multi-hour ascent mission.

Briz-M, weighing in at 22 metric tons, hosts a 2,000kgf S5.98 engine that can support multiple firings separated by long coast phases to sequentially maneuver up into a high-energy target orbit. As of L-1 day, no information on the Briz-M flight profile was provided through official channels nor was the spacecraft’s target injection orbit revealed.

ISS Reshetnev’s Ekspress-2000 satellite platform has flown three times to date and in all cases employed a four-burn Briz-M mission profile designed to lift the satellite either directly into Geostationary Orbit (Yamal 401 & Ekspress AM-5) or near-GEO transfer orbit (Ekspress AM-6). A four-burn mission would require approximately nine hours and 22 minutes from launch to spacecraft separation.

The other possible flight profile would employ a five-burn Briz-M mission to deliver the satellite into an elliptical Geostationary Transfer Orbit with an ascent duration of around nine hours and 12 minutes.

Ekspress-2000 is a satellite platform developed by ISS Reshetnev to host large communication payloads as opposed to the smaller Ekspress-1000 satellite bus that had become operational earlier. The satellite platform is capable of hosting payloads of more than one metric ton with a payload power topping out at 15kW. The satellite is three-axis stabilized with precise pointing capability and stationkeeping accuracy of 0.05 degrees. Ekspress-2000 offers the option of adding an electrical propulsion system to the chemical propulsion system that is used for orbital adjustments and stationkeeping in Geostationary Orbit.