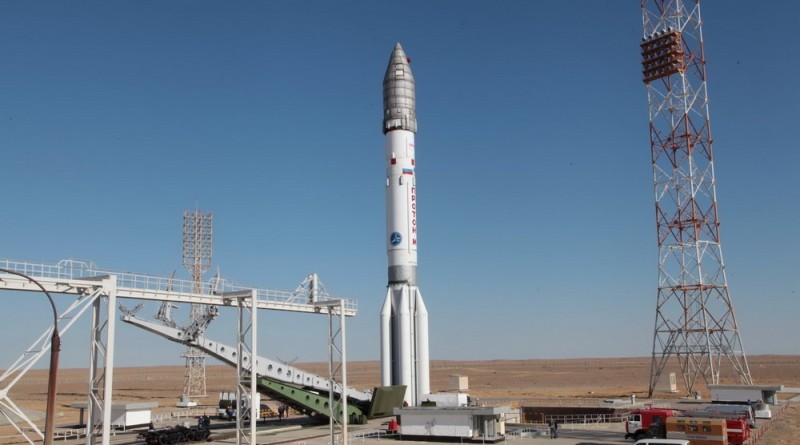 A Proton-M rocket rolled to its launch pad at the Baikonur Cosmodrome on Tuesday to enter final preparation for its planned Friday liftoff on a mission to deliver the Turksat-4B communications satellite to Geostationary Transfer Orbit. Launch from Site 200/39 is set for 20:40 UTC, marking the start of a nine-hour and 13-minute mission that will involve five firings of the Briz-M upper stage to methodically boost the 4,924-Kilogram satellite to its desired orbit.

Turksat-4B, built by Mitsubishi Electric, sports a payload comprised of C- Ka- and Ku-Band transponders to deliver coverage to Europe, Africa and portions of Asia with special focus on the Turkish territory. It is the second MELCO satellite to launch atop the Proton rocket, following in the footsteps of Turksat-4A orbited in 2014. The two satellites will enable Türksat AS to provide telecommunication services as well as Direct-to-Home television broadcasting throughout Turkey as well as broad regions of Europe, Central Asia, the Middle East and Africa. The 4B satellite will be mainly used in Fixed Satellite Communication services via Ku- and C-Band and broadband connectivity and data services in Ka-Band.

The Turksat-4B mission suffered a series of slips from an initial November 2014 target that soon became June 2015 and was pushed further after May’s third stage failure, putting Proton launches on hold for three months.


Turksat-4B was delivered to the Baikonur Cosmodrome on September 2 to begin its final processing flow, conducted by the Japanese MELCO team – putting the satellite through a series of tests before heading into hazardous processing to fuel the spacecraft with about 20 years worth of propellant. The Briz-M upper stage was delivered from its manufacturer, Khrunichev, on September 16, also entering final processing that included testing activities and fueling of the stage’s high-pressure propulsion system that feeds the attitude control and settling thrusters.

Inside the Launcher Integration Facility, the Proton rocket took shape as its three lower stages were assembled. The three-stage rocket finished integration on September 18 and underwent a series of integrated tests. Meanwhile, the upper stage and Turksat spacecraft were joined and encapsulated in the protective Proton-M payload fairing, marking the completion of the assembly of the Orbital Unit that was set for transfer to the Launcher Integration Facility. A three-day delay was caused by a crane that suffered an electronics failure, requiring a replacement before the payload stack could be moved onto its transporter.

Nevertheless, the Orbital Unit eventually made it to the launch vehicle for its integration atop the third stage of the Proton. Final tests were conducted before the rocket was rolled out to the Briz-M fueling station for a two-night stay. The Briz-M received a total of 19,800 Kilograms of Unsymmetrical Dimethylhydrazine and Nitrogen Tetroxide to be consumed during the flight by the S5.98 main engine.

Proton-M made its way to the launch pad at Site 200/39 on Tuesday morning at the traditional time of 6:30 a.m. With rollout four days ahead of launch, teams were able to follow the well-established launch preparations flow.

When arriving at the pad, the 58-meter tall Proton was placed in its vertical launch position and teams moved the Service Structure into position to provide access platforms to the Proton for the final preparatory steps ahead of countdown operations. As part of its on-pad campaign, Proton and Briz-M complete a detailed series of systems checks to ensure all subsystems of the vehicle are ready to support the mission.

Countdown operations are set to begin on Friday, 11 hours and 30 minutes prior to the planned 20:40 UTC liftoff. Blasting off in the dead of night, Proton will be tasked with a standard ascent mission, firing its six RD-275M engines for the first two minutes of the flight, providing a collective thrust of 1,014 metric-ton-force. The second stage cuts in for a burn of three minutes and 27 seconds using a cluster of four 599-Kilonewton engines. Proton’s third stage is planned to fire for a little over four minutes, shutting down at T+9 minutes and 42 seconds to deliver the Briz-M and satellite to a sub-orbital trajectory.

After the conclusion of the fourth burn, Briz-M will coast for over five hours to be able to climb all the way up to the apogee of the orbit for the final burn of the mission that serves as a perigee-raising maneuver and a plane-change, reducing the inclination of the orbit. Turksat-4B is set to separate nine hours and 13 minutes after liftoff, targeting an orbit of 9,281 by 35,786 Kilometers at an inclination of 13.2 degrees.