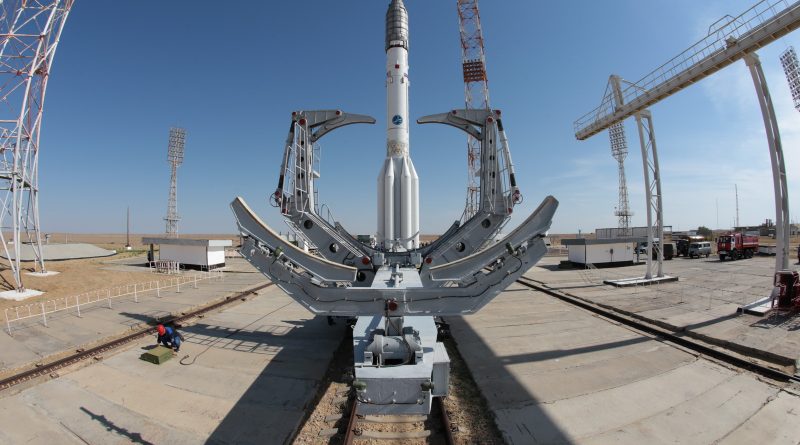 Proton’s third flight of the year is targeting a liftoff time at 19:23:41 UTC on September 11th and the three-stage rocket will operate for just under ten minutes before handing over to the Briz-M upper stage that will be tasked with a nine-hour flight to dispatch the Amazonas 5 satellite into a Geostationary Transfer Orbit.

2017 has been a year of rebuilding for Russia’s current heavy-lift workhorse following a struggle with reliability over the last decade and a major issue discovered within the rocket’s engines to begin the year. The engine issue was revealed as the result of a close call on last year’s Intelsat 31 launch in which Proton encountered a premature shutdown of one of its four second stage engines. An investigation into the problem unveiled a massive quality control problem related to Soyuz and Proton engines which ended up grounding Proton for a full year.


The investigation found that a solder joint connecting the fuel injector with the gas generator on Proton’s second and third stage engines did not use the material specified for Proton’s production and instead used a material with a lower melting point – introducing a possible weak point in a critical component of the engine where liquid propellants are turned into extremely hot gas at high pressure. Although only a small quantity of the wrong solder material was used, a total of 71 engines for 14 vehicles had to be recalled for replacement of their gas generators as it was impossible to trace back on which engines the defective material was used.

As a result, Proton flight operations stood still for the first part of 2017 and Proton finally returned to flight on June 8 with the EchoStar 21 satellite and Proton flew again in August on a mission for the Russian Military, orbiting the first of four Blagovest high-capacity communications satellites for military and civilian use. Now, Proton is set for a pair of commercial launches in close succession with Amazonas 5 targeting launch on Monday and the AsiaSat-9 satellite already deep in its processing campaign at Baikonur for liftoff on September 28 – both missions are operated by International Launch Services, Proton’s commercial operator.


Amazonas 5, built by Space Systems Loral in California, was targeting liftoff in the first quarter of 2017 before Proton was hit by the engine problem. With Proton remaining on the ground, the satellite was kept in readiness as SS/L’s facilities prior to a final checkout for shipment to the launch site.

The satellite was delivered to the Baikonur Cosmodrome aboard an Antonov cargo jet on August 8 to enter its launch campaign that began with a final round of pre-flight testing before the spacecraft was fueled for its 15-year mission of beaming television and Internet connectivity to South and Central America. Next, the satellite was mated with the Briz-M upper stage and the orbital unit was encapsulated in the protective payload fairing to be shipped to the launcher integration facility where the three-stage Proton rocket had undergone assembly and testing prior to integration of the payload.

Amazonas 5, based on the popular SSL-1300 platform, weighs in at 5,900 Kilograms and hosts a Ku- and Ka-Band payload to deliver TV broadcasting services and Internet connectivity from an orbital position at 61° West. The satellite was ordered in 2014 to replace Amazonas 4A that suffered a power system malfunction shortly after its 2014 deployment, reducing its capacity and shortening its life expectancy.

Amazonas 5 hosts 24 Ku-Band transponders for TV distribution to Latin America and Brazil and 34 Ka-Band spot beams support Internet distribution, corporate networks and other telecommunications services over South and Central America with focus on Brazil and Mexico.

With its payload installed, Proton was moved from the 92-A50 assembly hall to the Briz-M fueling station on Thursday where the Briz-M received 19,800 Kilograms of toxic Unsymmetrical Dimethylhydrazine and Nitrogen Tetroxide propellants to be expended over the course of a five-burn ascent mission. Proton-M emerged from the fueling station before dawn on Friday for a slow trek over to the launch pad at Site 200/39 where it took its vertical launch position for a three-day on pad campaign.


The Service Structure was rolled up to the launch vehicle to begin the process of putting the launcher through a final testing campaign before undergoing preparatory tasks for propellant loading, to be completed on Monday as part of countdown operations. Liftoff is timed for precisely 1:23:41 a.m. local time on Tuesday.

Two more Proton missions are on the manifest for 2017 – the September 28th launch with AsiaSat-9 and the second Blagovest launch in December.

Proton-M countdown operations kick off 11.5 hours ahead of the planned launch time with the activation of the Briz-M upper stage for checkouts and software load. Proton-M is powered up seven hours ahead of launch for final setup steps ahead of propellant loading.

The Proton rocket will follow its standard ascent profile, beginning with a short vertical climb before completing a roll maneuver to line up with its precise ascent trajectory – departing Baikonur to the north east along a 61.3° launch azimuth.

Proton-M stands 58.2 meters tall and measures 7.4 meters in diameter with a launch mass of 712 metric tons. Its first stage is 21.2 meters long hosting a large oxidizer tank that is surrounded by six fuel tanks holding a total of 419,400 Kilograms of propellants fed to six RD-275M engines for a liftoff thrust of 9,942 Kilonewtons.

Beginning the five burn, nine-hour mission, the Briz-M upper stage will ignite its S5.98 engine after a very brief coast to conduct a burn of four minutes and 24 seconds that puts the stack into a Low Earth Orbit of 170 by 186 Kilometers, 51.6° for half an orbit of coasting set up for a long burn on the ascending node of the orbit with a duration of nearly 18 minutes to raise the apogee of the orbit to 5,000 Kilometers, placing the apogee passage close to the equator.

Next is a coast phase of nearly an entire orbit so that the next burn can again take place around the perigee of the orbit, on the next ascending node, to continue raising the apogee to reach the desired altitude of 35,302 Kilometers. The third and fourth burn are conducted as a pair, amounting to a total of 17.5 minutes, only separated by a brief coast during which the spent Auxiliary Propellant Tank is jettisoned from the Briz-M after its propellant load of 14,600 kg is depleted.

After the conclusion of the fourth burn, Briz-M will coast for five hours to be able to climb all the way up to the apogee of the orbit for the final burn of the mission that serves as a perigee-raising maneuver and a plane-change, reducing the inclination of the orbit. The fifth burn is planned to be six minutes and 28 seconds in duration, targeting a start time of T+8 hours and 49 minutes. Spacecraft Separation is expected 9 hours and 12 minutes after liftoff into an orbit of 4,450 by 35,286 Kilometers, inclined 22.9°.