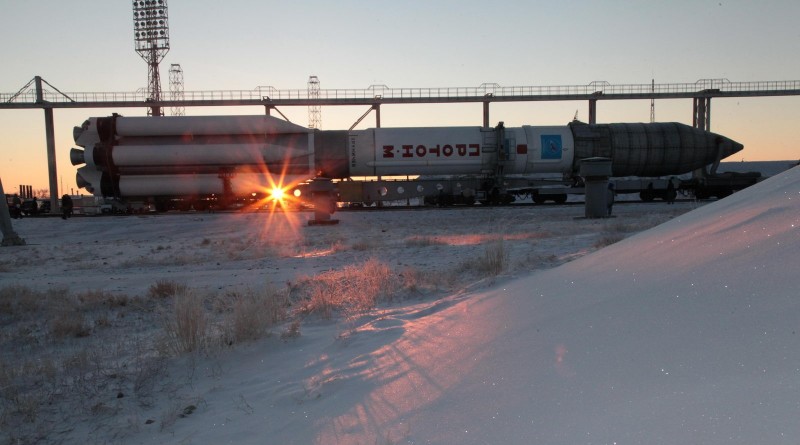 Russia’s Proton-M rocket is set for its year-closing mission on Wednesday, launching the Ekspress AMU-1 communications satellite to Geostationary Transfer Orbit. Liftoff from the Baikonur Cosmodrome is set for 21:30 UTC to mark the start of a standard ascent mission by the three-stage Proton rocket lasting just under ten minutes, to be followed by a flight of over nine hours involving five burns of the Briz-M upper stage to reach the intended orbit.


The 5,700-Kilogram satellite carries a Ku/Ka-Band payload of 71 transponders delivering coverage beams to the European portion of Russia and surrounding eastern European countries and to Sub-Saharan Africa. Services delivered by the satellite include TV and video distribution as well as IP-based applications. Residing at 36° East in Geostationary Orbit, the satellite will operate for at least 15 years. A portion of the satellite’s capacity, particularly the African beams, has been leased to Eutelsat to be marketed under the name Eutelsat 36C.

The Ekspress AMU-1 satellite was delivered to the Baikonur Cosmodrome in the first half of November to enter final processing for its launch at the end of the year. As is typical for Russian government-operated flights of the Proton, details on launch preparations were not provided until the rocket was moved to the launch pad on Sunday at a snowy Baikonur Cosmodrome. Placed in its vertical launch position, the 58-meter Proton-M entered a detailed testing campaign to set up for the initiation of the countdown on Wednesday.

The Russian State Commission approved the rocket for tanking, starting at L-6 hours to fill the three stages with 622,000 Kilograms of hypergolic propellants. The Briz-M upper stage received its propellant load, 19,800kg of hypergolics, at a dedicated fueling facility last week.

Soaring to life 2.5 seconds before blastoff, Proton’s six engines will reach their liftoff thrust of more than one million Kilogram-force. Liftoff is targeted for precisely 21:30:50 UTC on Wednesday

After the conclusion of the fourth burn, Briz-M will coast for over five hours to be able to climb all the way up to the apogee of the orbit for the final burn of the mission that serves as a perigee-raising maneuver and a plane-change, reducing the inclination of the orbit. Spacecraft Separation is expected around nine hours and 13 minutes after launch.