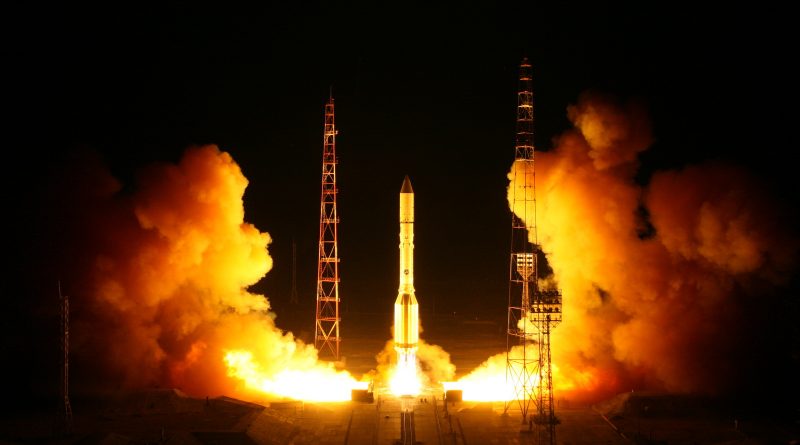 Russia’s Proton rocket thundered off from the remote Baikonur Cosmodrome in Kazakhstan Wednesday night on a hush-hush mission with a highly-capable communications satellite exploiting a novel radio frequency band that enables high-bandwidth communications to be used by the Russian military and commercial entities. Known as Blagovest 11L, the satellite is the first in a constellation of four multi-band satellites, officially intended for “Russian domestic services.”

Proton, flying for the second time in what is a slow year for the Russian workhorse, lifted off from Site 81/24 at 22:07 UTC on Wednesday, 4:07 a.m. local time on Thursday. The three-stage, all-hypergolic rocket successfully carried out a standard ascent mission of nine minutes and 42 seconds to send the Briz-M upper stage on its way on a multi-hour mission to deploy the Blagovest satellite. The number of engine firings performed by Briz-M is unknown, though spacecraft separation was expected between nine and nine and a half hours after launch based on typical flight profiles.

Roscosmos announced at 8:13 UTC on Thursday the success of the 100th Proton-M mission, confirming that Blagovest was placed into the planned orbit. This also marked the first official acknowledgement of the mission through official channels.


Wednesday night’s mission was treated with unusual secrecy, even for a flight in the interests of the Russian Ministry of Defence with no prior acknowledgement of the mission by Roscosmos, Proton manufacturer Khrunichev or the defence ministry. No photos of launch preparations were released through official sources and information like flight profile, target orbit or substantial details on the payload were kept under wraps – further underlining the satellite’s military role as opposed to a craft dedicated only to civilian services.

Blagovest, also known under the code name 14F149, is a satellite project operated by the Russian Ministry of Defence with ISS Reshetnev acting as prime contractor for the satellites, using the company’s large Ekspress-2000 satellite platform and communications payloads procured through Thales Alenia Space. The project was initiated around 2010/11 and was partially declassified in 2015 with an initial launch target in 2016, but ended up slipping significantly due to Proton’s engine troubles that caused a year-long gap in launches to permit refurbishment of potentially defective engines.

According to satellite builder ISS Reshetnev, Blagovest hosts a high-throughput payload operating in the Ka-Band frequency (26.5-40 GHz) and the Q-Band Extremely High Frequency Range of 33 to 50 GHz, making the satellite one of the first to operationally use Q-Band communications that can support higher bandwidths. Documentation by Thales Alenia confirms Blagovest uses Q-Band filter equipment and Ka-Band input multiplexers from the company and a presentation by Spanish Company RYMSA also shows the satellite as having a C-Band payload – to be used to cater to heritage systems that do not yet support Ka-Band capability.


Ekspress-2000 is Reshetnev’s most-capable satellite platform for Geostationary application, typically weighing 3.0 to 3.5 metric tons at launch and capable of hosting payloads of 1,000 Kilograms. The platform can support a payload power of up to 15 Kilowatts, offers excellent three-axis stabilization, precise stationkeeping capabilities and can combine chemical and electric propulsion systems. Specifications such as launch mass or details on the payload are not available for the secretive Blagovest mission.

Reshetnev, when delivering the satellite to its Kazakh launch site in July, issued a press release saying the craft would be providing civilian services like TV and radio distribution, broadband Internet access, data-intensive services and video conferencing. The secrecy surrounding its mission suggests the satellite’s military role outweighs its part in commercial communications, though reports indicate Blagovest will be made available for large commercial customers.

With each Blagovest satellite carrying in excess of 30 Ka-Band transponders plus C-Band capacity, the four-satellite constellation will provide the Russian government and military with an immense increase in communications capability and data throughput over the current communications network operating three Raduga-1M satellites in Geostationary Orbit and Meridian satellites in elliptical orbits for coverage of the northern latitudes.

The use of Q-Band places Blagovest among only a few satellites that so far have opted to use this advanced technology widely considered the future of high-throughput communications, but still in its infancy in terms of operational use. The Extremely High Frequency (EHF) Q-Band has been studied extensively for high-throughput satellite programs in which the feeder links (satellite to ground gateway & vice versa) would use Q-Band to free up additional user bandwidth in Ka-Band.


However, communications at these higher frequencies are susceptible to atmospheric fluctuations like areas of bad weather as rain can attenuate the millimeter-wavelength signals – requiring mitigation either through using multiple ground hubs or adaptive coding and modulation (ACM) techniques.

Commercial satellite operator Eutelsat launched an experimental Q/V-Band payload aboard the Eutelsat 65 West A satellite last year to acquire additional insights to enhance the reliability of communications in the EHF spectrum. Eutelsat confirmed it had successfully completed multiple test communications with the 40-50GHz payload.

Blagovest 11L’s launch campaign has been anything but smooth as reported by RussianSpaceWeb.com, having to overcome a regulatory hurdle for the use of Site 81/24 and at least three separate technical issues on the Proton booster that required long nights by engineering teams as well as urgent air deliveries with replacement parts. The repaired Proton, topped by its secretive payload, was rolled to the launch pad on Sunday for a final testing campaign ahead of countdown operations on Wednesday.

The 58-meter tall Proton soared off from Baikonur before sunrise on Thursday, firing up its six RD-275M engines to take to the skies with a total thrust of over 1,000 metric-ton-force. Weighing in at over 700 metric tons, Proton’s three stages hold 622 metric tons of toxic propellants, Unsymmetrical Dimethylhydrazine and Nitrogen Tetroxide – expended in under ten minutes to lift the Briz-M upper stage and satellite payload on a sub-orbital trajectory.

Proton’s first stage, measuring 21.2 meters in length and 7.4 meters in diameter with the characteristic external tanks clustered around the core, consumed 3,600 Kilograms of propellant per second, firing for one minute and 59 seconds when the rocket’s second stage was to kick in for the hot staging sequence. Outfitted with four 599-Kilonewton engines, the 14.5-meter long second stage was planned to be in action for three minutes and 28 seconds, consuming some 156 metric tons of propellant to lift the rocket out of the dense atmosphere.

The separation sequence between the second and third stage was also expected in hot-staging mode using the third stage’s four-chamber vernier engine to pull away from the spent second stage at T+5 minutes and 27 seconds, followed four seconds later by the ignition of the 583-Kilonewton main engine on its four-minute burn.

Proton was to shed its payload fairing around 20 seconds into operation of the third stage, revealing the secretive payload for the rest of the ride into orbit. Stage 3 was to exhaust its 46-metric ton propellant load nine and a half minutes into the mission with separation of the Briz-M expected at T+9:42 to mark the end of Proton’s job and the start of a lengthy ascent mission controlled by the Briz-M.

Briz-M, weighing in at 22 metric tons, hosts a 2,000kgf S5.98 engine that can support multiple firings separated by long coast phases to sequentially maneuver up into a high-energy target orbit. No information on the Briz-M flight profile was provided through official channels nor was the spacecraft’s target injection orbit revealed.

ISS Reshetnev’s Ekspress-2000 satellite platform has flown three times to date and in all cases employed a four-burn Briz-M mission profile designed to lift the satellite either directly into Geostationary or a near-GEO transfer orbit. A four-burn mission would require approximately nine hours and 22 minutes from launch to spacecraft separation.

The other possible flight profile would employ a five-burn Briz-M mission to deliver the satellite into an elliptical Geostationary Transfer Orbit with an ascent duration of around nine hours and 12 minutes.

Wednesday’s launch was only Proton’s second flight of the year, coming after the June 8 return to flight mission that successfully delivered the EchoStar-21 commercial communications satellite. The next mission for the Russian workhorse is right around the corner, targeting a September 9th launch of a commercial ILS Proton with the Amazonas-5 communications satellite. The launch of the second Blagovest satellite has been tentatively scheduled for the end-of-year time frame.