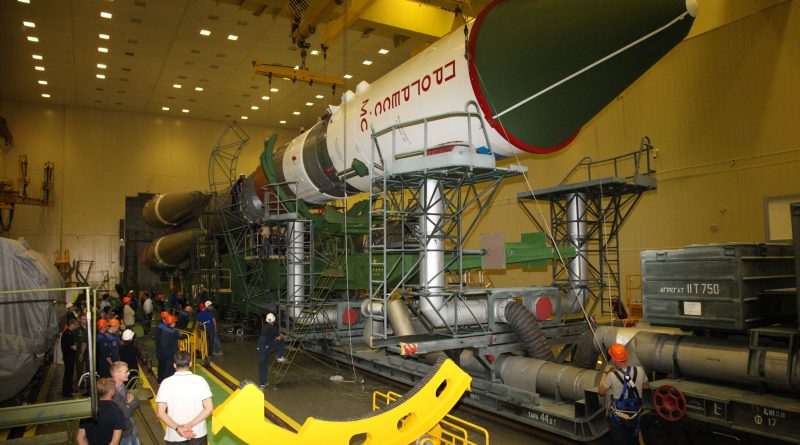 Engineers at the Baikonur Cosmodrome finished assembly of a Soyuz 2-1A rocket on Saturday in preparation for a June 14 liftoff with the Progress MS-06 cargo spacecraft headed to the International Space Station, carrying around 2.4 metric tons of supplies.

Progress MS-06 is the first Progress mission in the post-Soyuz-U era after the record-setting launch vehicle sailed into retirement earlier this year when launching Progress MS-05 to close out a four-decade service life that included crew and cargo launches to ISS and Russia’s previous space stations. Soyuz 2-1A first flew a Progress mission in October 2014 in a soft transition between the established Soyuz-U/Progress combination and the new launcher/spacecraft duo – a wise decision as proven by the failure of Progress M-27M due to unforeseen interactions between the upgraded Block I third stage and the Progress spacecraft.

Progress MS-06 is the second Russian cargo-delivery mission of 2017, carrying the usual mix of food, fuel and supplies as well as science cargo and four small satellites. Liftoff is planned for 9:20:13 UTC on Wednesday and Soyuz 2-1A will be in operation for eight minutes and 45 seconds to send the 7,200-Kilogram spacecraft into a Low Earth Orbit. A series of three engine firings on Wednesday and Thursday will set the stage for a fully automated rendezvous that will culminate in what is expected to be an automated docking to the Zvezda Service Module at 11:42 UTC on Friday to mark the beginning of a planned six-month stay through early December.

Progress MS-06 went through final testing and processing tasks in April and May, receiving propellants for its flight to ISS before attachment to its payload adapter and encapsulation in the protective payload fairing. At the MIK Launcher Integration Facility at Site 112, Soyuz 2-1A went through its early assembly phase, comprising acceptance tests of the launch vehicle components and attachment of the four boosters to the rocket’s core stage.

Soyuz and Progress met for the first time when the encapsulated spacecraft arrived at the MIK facility on Friday for attachment to the Block I third stage before the upper stage was installed on the core stage. Launcher integration finished on Saturday and the State Commission cleared the 46-meter long vehicle for rollout to the launch pad at Site 31/6.