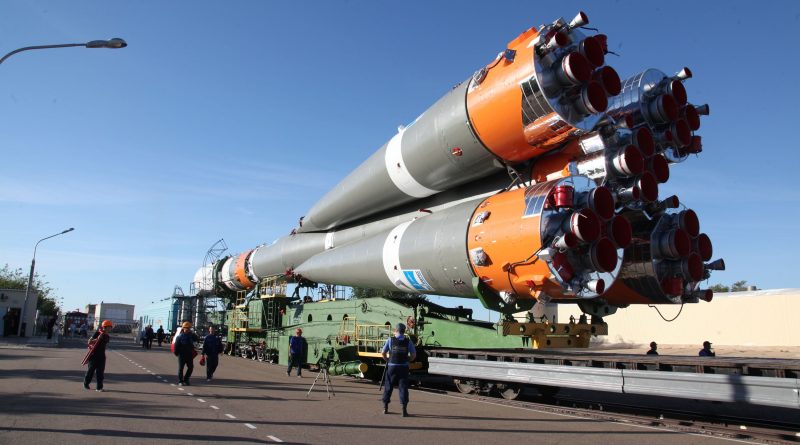 Russia’s Soyuz 2-1A launch vehicle, tasked with carrying a Progress cargo ship into orbit on Wednesday, was moved to its launch pad at the Baikonur Cosmodrome in Kazakhstan on Sunday for the standard two-day on-pad campaign to prepare for countdown operations.

The 46-meter tall vehicle emerged from the MIK-112 processing building at the traditional early morning hour, dating back to the rollout of Yuri Gagarin’s historic mission aboard Vostok 1 in 1961. Soyuz was greeted by clear skies as it made its rail trip to Site 31/6 where the vehicle was placed in its vertical launch position and the Service Structure halves were moved up along with the umbilical masts to enable engineers to connect Soyuz to commodity lines ahead of a detailed testing campaign and tanking preparations.

Soyuz 2-1A continues working toward a liftoff at 9:20:13 UTC on Wednesday for a nine-minute climb into orbit with the Progress MS-06 cargo craft. Dispatched to a Low Earth Orbit, the 7,200-Kilogram spacecraft will carry out a series of engine burns later on Wednesday and Thursday before initiating a fully automated rendezvous with ISS, aiming for docking to the aft end of the Zvezda Service Module at 11:41 UTC on Friday.

Progress MS-06 is the second Russian cargo delivery to ISS in 2017 and carries around 2,400 Kilograms of food provisions, refueling propellant, water, pressurized gas, maintenance hardware and scientific experiments, plus four small satellites from Russian universities and institutions. Docking of the spacecraft will be overseen by Fyodor Yurchikhin, currently the only Russian crew member on board the Space Station.