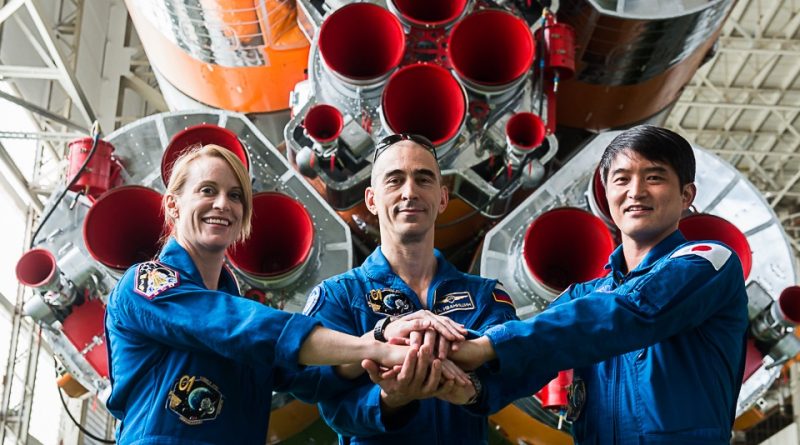 At the Baikonur Cosmodrome engineers assembled a Soyuz FG rocket on Sunday to set the stage for the launch of the next ISS crew next week.

Anatoli Ivanishin, Takuya Onishi and Kate Rubins will begin a half-year Space Station mission with a nine-minute ride atop the Soyuz rocket in the early hours of Thursday with liftoff set for 1:36 UTC.

The crew paid a visit to their Soyuz rocket on Saturday and also completed a final inspection of the Soyuz spacecraft after it had wrapped up a multi-week final processing flow. Soyuz MS-01, the first in the new line of improved Soyuz spacecraft to fly, was transported to the MIK-112 integration facility later on Saturday, allowing launch vehicle assembly to be completed on Sunday.

The 27.8-meter long Core Stage of the Soyuz rocket had its four liquid-fueled boosters installed in the weeks ahead, leaving only the upper composite to the added. Engineers installed the enshrouded Soyuz on the Block I third stage, putting in place structural and electrical connections before adding the Launch Escape Tower to provide abort capabilities during the early phase of the crew’s ascent into orbit. Finally, the third stage was mated with the Core Stage to finish the assembly of the 49.5-meter tall Soyuz rocket.

The Russian State Commission convened in the evening hours on Sunday, reviewing the progress of launch preparations to clear the vehicle for rollout to the launch pad in the early hours on Monday. All remains on track for an on time-liftoff on July 7 to mark the start of a two-day chase of the Space Station.