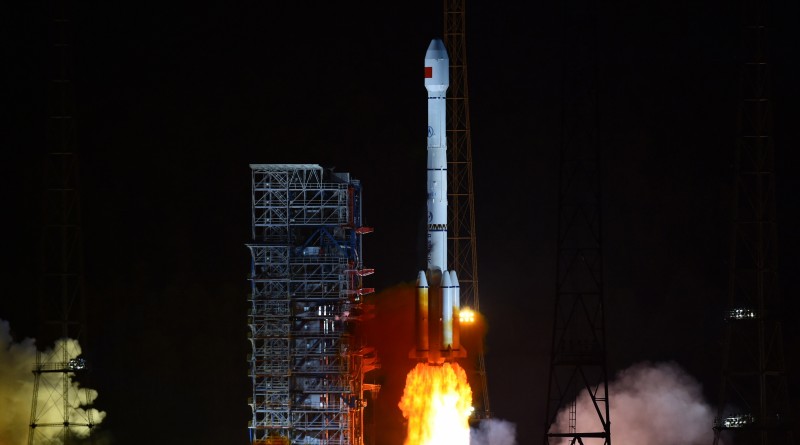 Long March 3B blasted off at 16:16 UTC and conducted a standard GTO-ascent mission, flying to the south-east across the Chinese mainland before passing over the island of Taiwan and heading out over the Pacific Ocean. The 56-meter tall rocket operated its four boosters for the first 140 seconds of the flight before they separated and CZ-3B continued onward under the power of its core stage for the next 18 seconds. The second stage burned for just shy of three minutes and the third stage successfully inserted the vehicle into a Low Earth Parking Orbit for 11 minutes of coasting.

The second burn of the cryogenic third stage raised the apogee of the orbit, placing the high-point over the equator to ease the process of transferring the satellite to Geostationary Orbit. Spacecraft separation occurred 26 minutes after launch. The state-run Xinhua news agency reported an insertion orbit of 212 by 41,965 Kilometers.

JSpOC published the following orbital parameters for the two objects placed in orbit by this launch:

Object A in represents the APStar-9 spacecraft while 059B is the Long March 3B upper stage in its orbit after performing avoidance maneuvers post spacecraft separation. APStar-9, based on the DFH-4 satellite bus built by CAST, will begin orbit-raising maneuvers in the coming days to eventually take up station at 142°E in Geostationary Orbit from where it will operate for 15 years.