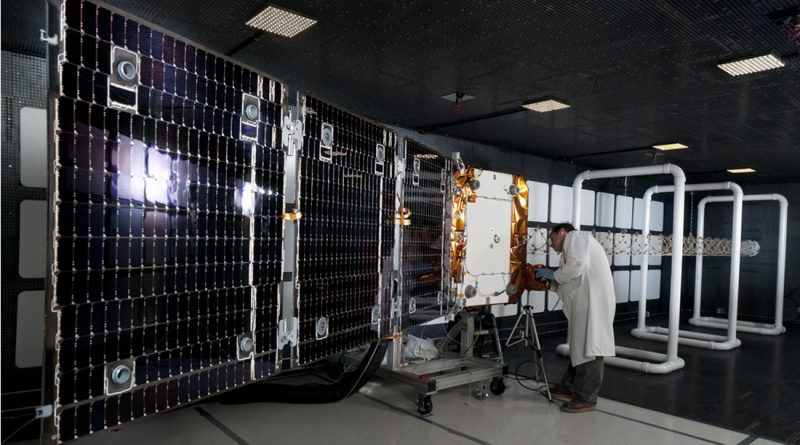 The Sierra Nevada Corporation announced on Monday that all 11 Orbcomm Generation 2 satellites launched atop a Falcon 9 rocket in December have passed in-orbit checkouts and were handed over to Orbcomm for regular operation as part of the company’s Machine-to-Machine architecture.

The 11 OG2 satellites followed in the footsteps of six OG2 satellites that headed into orbit in July 2014, also atop a SpaceX Falcon 9 rocket. Liftoff off the second batch of OG2 satellites occurred at 1:29 UTC on December 22 and Falcon 9 provided the satellites with a smooth ride into orbit, though all eyes were on the first stage of the rocket as it maneuvered back to a concrete pad at Cape Canaveral to take its place in space history – becoming the first rocket stage involved in an orbital mission to make a propulsive landing.


The Orbcomm satellites, installed around ESPA payload adapter rings, began separating in pairs 15 minutes after liftoff. Shortly after separation, the 172-Kilogram satellites deployed their solar arrays and communication antennas, also checking in with ground stations to confirm all 11 survived their ride into orbit.

The Orbcomm G2 satellites are based on Sierra Nevada’s SN-100 bus, each outfitted with a single deployable solar panel and an eight-meter long boom facilitating a Helical Quadrifilar VHF antenna, supporting communications at frequencies of 137 to 153 MHz.

Orbcomm selected SpaceX as launch provider for the 18 OG2 satellites, initially planned to use the small Falcon 1e rocket before switching to the larger Falcon 9.

The first OG2 satellite was launched as a secondary payload on a Dragon flight to ISS for a demonstration mission, but was dropped off in a lower-than-planned orbit after the second stage of the rocket could not pass a fuel quantity test following an engine-out scenario during first stage flight. Only in orbit for a little over a day, the satellite could only demonstrate some of its functions.

The first group of six OG2 satellites enjoyed a smooth ride atop Falcon 9 in 2014 and were to be followed within a year by the next set, but 2015’s Falcon 9 launch failure on the Dragon SpX-7 mission meant the remaining OG2 satellites would have to remain on the ground until Falcon 9 was cleared for its return to flight.

The December 2015 mission coincided with the first flight of the Falcon 9 Full Thrust vehicle with plenty of excess energy to permit a return to Cape Canaveral after sending the second stage and OG2 satellites on their way towards orbit. After an on-target burn of the second stage, the 11 OG2 satellites were deployed to an orbit of 613 by 655 Kilometers.

Also, the spacecraft began raising their orbits as part of a phasing campaign to drift the satellites into three different planes, arranged to deliver global services with low data latencies. At present, the 11 OG2 satellites launched in December can be found in orbits between 603 x 606 and 729 x 740 Kilometers. Drifting will continue until the satellites are in the proper phase and settled in their appropriate planes, also at the proper spacing within each plane.

According to SNC, the OG2 satellite fleet is already processing more than 60% of Orbcomm’s Machine-to-Machine data traffic. “All Mission 2 satellites have exceeded performance measures and our team was able to achieve that key milestone just over a month after launching,” said Mark Sirangelo, corporate vice president of SNC Space Systems. “During that 30-day timeframe, we successfully completed the deployment and checkout of 11 simultaneously-launched satellites. We now have nearly 10 years of orbital operational heritage for the SN-100 bus as a result of the spacecraft launched in the OG2 constellation.”