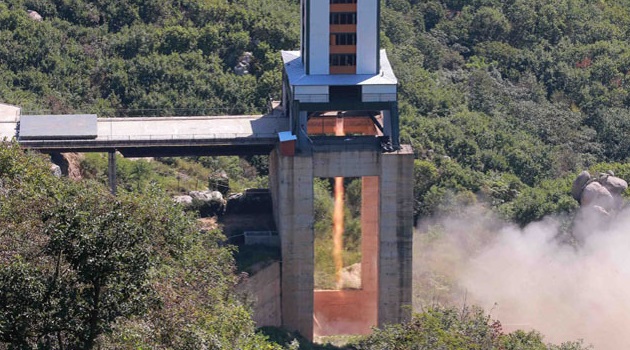 North Korea carried out a test of a high-powered rocket engine in what is likely to be the precursor to the country’s next attempt to put a working satellite into orbit.

The test marks the latest in a series of missile and rocket-related developments made by the isolated state in recent months including seven short-range missile tests conducted since the beginning of July.

According to the official KCNA news agency, Kim asked “to round off the preparations for launching the satellite as soon as possible on the basis of the successful test,” indicating the North’s sixth attempt to place a functioning satellite into orbit may be coming up soon.


The KCNA report was short on details on the technology behind the engine, only specifying that the test was dedicated to the verification of the engine’s operational parameters including the performance of the combustion chamber and accuracy of valve actuation and control systems.

Still images presented by official state TV indicate the engine is a high-pressure, pump-fed design that – judging by the appearance of the exhaust – consumes a storable propellant mixture. The photos do not reveal whether the engine uses a single chamber or makes use of a two-chamber design which would draw parallels to early Soviet designs.

Information released by the U.S. government earlier this year indicates that the engine could be the result of a collaboration between North Korea and Iranian rocket scientists.

According to the KCNA report, the new engine would build the foundation for a more-powerful carrier rocket, capable of launching various kinds of satellites including earth observation missions and Geostationary Satellites. KCNA states that Kim initiated a five-year development program aiming to launch satellites towards Geostationary Orbit.

A satellite launch in the not-too-distant future would repeat a pattern seen earlier this year when North Korea followed up a nuclear test carried out in January with the February 7 launch of the Kwangmyongsong-4 satellite.

The North conducted its fifth and largest underground nuclear test on September 9, involving a small nuclear device the country says could be mounted to a ballistic missile.

The demonstration of a miniaturized nuclear bomb and a long-range missile represent two of three critical components of a nuclear-capable ballistic missile system, the third being a re-entry vehicle. In March, a test was conducted involving a rocket engine blasting a Thermal Protection Cap likely intended to shield a warhead during atmospheric entry, marking the last piece needed to gain a nuclear missile architecture.

North Korea continues to stress that the country’s orbital launches are of a peaceful nature in pursuit of technological and scientific endeavors. The country first put a satellite into orbit in 2012 and was met with harsh criticism since the launch was seen as a clear violation of a 2006 UN Resolution banning North Korea from carrying out nuclear tests and launches of ballistic missiles.

Whether the upcoming launch will make use of the newly developed engine was left open in the KCNA report, though seems doubtful.

Not much is known about the rocket the new engine will be powering, however, satellite imagery from the Sohae launching station has shown that the launch facility’s Service Tower was extended by around 15 meters between the 2012 and 2015 Unha rocket launches, now capable of supporting a 60-meter tall launch vehicle.

It is unknown whether the North Koreans are aiming straight for a 50-60-meter tall heavy-lift rocket or if the plan is to first build an intermediate vehicle capable of placing a sizeable Earth observation satellite into a Sun Synchronous Orbit.

Whatever the future plan might be, North Korea will face a major challenge when realizing its ambition to send satellites into Geostationary Orbit: its geographical location.

An efficient launch trajectory for geostationary satellites would carry the rocket over Japan when launching to the east and a north-easterly ascent path would place the rocket over China and Russia – countries that will not tolerate a North Korean rocket flying over their territory.

The only clear path for orbital launches from North Korea is due south, creating a major payload penalty when aiming for a geostationary transfer orbit.

Nevertheless, the new rocket engine presented in the KCNA report could permit the development of a booster capable of placing several hundred Kilograms into a Geostationary Orbit when coupled with a suitable upper stage.