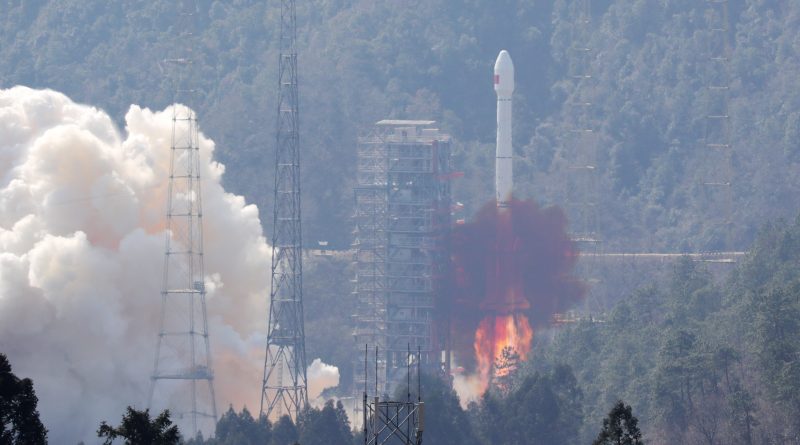 China conducted its seventh orbital space launch of the year on Monday with a Long March 3B rocket placing the next pair of Beidou-3 navigation satellites into orbit to join the country’s growing Global Navigation Satellite System that is expected to reach operational strength later this year.

Monday’s launch involved the Beidou-3 MEO-3 and MEO-4 satellites operating from Medium Earth Orbit 21,500 Kilometers in altitude, joining seven MEO satellites orbited over the last two and a half years.

Liftoff from the LC2 complex at the Xichang Satellite Launch Center took place at precisely 5:03:04.218 UTC and the Long March 3B rocket successfully lifted the two satellites and their YZ-1 upper stage into a preliminary orbit from where the upper stage took over for a multi-hour mission directly into Medium Earth Orbit. Official Chinese media confirmed the successful orbital insertion of the satellite pair four and a half hours after launch and orbital tracking data provided by the Joint Space Operations Center shows the two satellites reached their target orbit, entering Plane B of the constellation.


Continuing a busy push to start 2018, China remains in the leading position for orbital space launches conducted by any country, delivering a total of 23 satellites into orbit already. Monday’s launch marked the second flight in support of Beidou-3 this year, following up on the January 11 launch of Beidou-3 MEO-7 and MEO-8.

Deployment of Beidou-3 will be a primary focus for the Chinese in 2018 with as many as 18 Beidou satellites on the manifest this year, according to the China Aerospace Science and Technology Corporation. The overall goal for this year will be to bring the constellation to an initial operational capability to start regular services before full operational capability is reached in 2020 with all constellation slots filled and orbital spares pre-positioned in the various orbital planes of the constellation.


China’s Navigation Satellite System finds its roots back in 1983 when the initial proposals for a navigation system were made, but the program’s first launch did not occur until 2009. Reaching the launch pad, the project was drawn out as a three-step program, starting out as a purely regional navigation system for the Chinese Mainland before expanding coverage to the Asia-Pacific Region and eventually pushing for 24/7 global coverage.

The first step was realized with three satellites in Geostationary Orbit providing services to the Chinese Mainland with an accuracy of 20 meters. Beidou-2, covering the Asia-Pacific Region, was inaugurated in 2009 and comprised five satellites in GEO and five in inclined stationary orbits plus a limited number of MEO satellites. To reach global coverage, China planned to expand the MEO constellation for 24/7 services while retaining the GEO/GSO segment to provide compatibility with the first generation of ground terminals.

The finished Beidou-3 constellation will comprise 27 Beidou-3M satellites in Medium Earth Orbit, five Beidou-3G satellites in Geostationary Orbit over the equator and three Beidou-3I satellites in inclined Geosynchronous Orbits. Two types of MEO satellites are employed by Beidou-3, made by two different manufacturers (CAS & CAST). To that end, the first three MEO launches under Beidou-3 were classed as in-orbit validation missions while the most recent Beidou-3 missions in November and January lifted the first operational satellites.

While the GEO/GSO satellites carry two payloads – one for the Beidou-3 system and one to provide compatibility with the previous generation – the MEO satellites only carry the Radio Navigation Satellite Service that operates in a similar way as the GPS, Galileo, Glonass and Navic systems – sending coded signals in the L-Band frequency with ultra high timing precision so that receivers on the ground can process three or four different signals in order to calculate the user’s precise position, elevation and speed.

The Medium Earth Orbit satellites are deployed to an orbit of 21,520 by 21,545 Kilometers inclined 55.26 degrees and the finished constellation will feature three orbital planes with nine satellites per plane to guarantee global coverage.


Lifting off with its four liquid-fueled boosters and large core stage firing at full throttle, the Long March 3B had a total launch thrust of 604 metric-ton-force as it departed Xichang to the south east, en-route to an initial Parking Orbit. The four boosters, 16.09 meters long and 2.25 meters in diameter, were to fire for two minutes and 20 seconds – each delivering 740 Kilonewtons of additional thrust and burning through 41,100 Kilograms of hypergolic propellants.

Monday’s mission was another close call for a town in the Guangxi province as the remains of the rocket’s four boosters impacted close to housing in Tianlin county, a picture similar to that from January in Tiandeng County where video of a falling and exploding CZ-3B booster was captured by villagers. On Monday, one of the boosters ended up on top of a house, possibly after rolling down an embankment.

After separation of the boosters, the vehicle was to continue ascent powered by the stage alone, fitted with a four-chamber DaFY-6-2 engine cluster providing 2,961 Kilonewtons of thrust. The stage stands 24.76 meters tall and holds 186,200 Kilograms of propellants at liftoff enabling it to burn for 158 seconds.