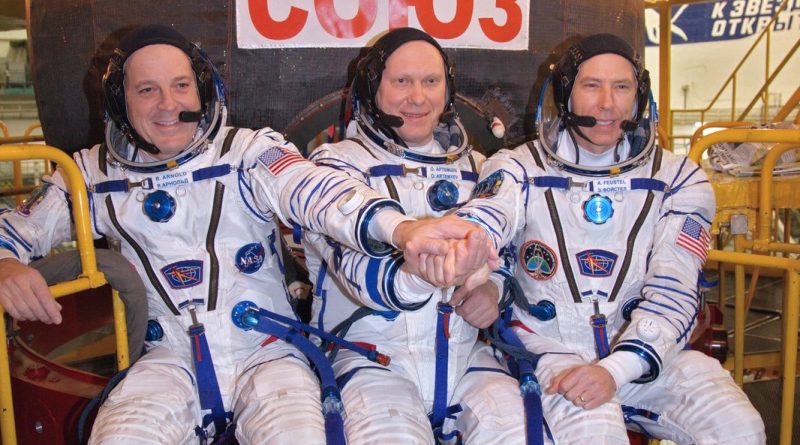 The next crew headed to the International Space Station – comprising a veteran ISS Cosmonaut and a pair of Shuttle fliers – arrived at the Baikonur Cosmodrome last weekend to enter their final preparations for launch on a five-month flight as part of ISS Expeditions 55 and 56. Soyuz Commander Oleg Artemyev and NASA Astronauts Drew Feustel and Ricky Arnold are working toward a nighttime liftoff on March 21st aboard their Soyuz MS-08 spacecraft, taking them on a two-day rendezvous with the International Space Station.

All three Soyuz MS-08 crew members have been aboard the Space Station before: Oleg Artemyev flew on Soyuz TMA-12M and spent 24 weeks in space as part of Expedition 39/40; Drew Feustel visited ISS for 12 days in 2011 as part of the penultimate Space Shuttle mission and educator-astronaut Ricky Arnold helped assemble the Space Station as part of the STS-119 crew in 2009. The trio now looks forward to adding 158 days spent off the planet to their records, spending over 22 weeks in orbit as part of their upcoming mission.


Soyuz MS-08 was originally penciled in for a same-day launch and docking on March 9, but schedules began re-shuffling in late 2017, first pushing the MS-08 mission to the 15th of March and a two-day rendezvous before the launch date was settled on March 21st for an ISS arrival on the 23rd.

Soyuz MS-08 will be the 137th mission of a Russian Soyuz and fly under the call sign ‘Hawaii,’ chosen by first-time Commander Oleg Artemyev. A trained engineer, Artemyev started out working for Russian spacecraft builder RSC Energia in 1998 where he developed testing procedures for spacewalking equipment and was part of the pre-launch processing team for the Russian Zvezda module, currently serving as the central Service Module of the International Space Station. Artemyev began spaceflight training in 2000, but was not selected as a Cosmonaut candidate until 2003, completing his training with the designation of Cosmonaut Researcher.

Artemyev participated in the first two stages of the Mars 500 isolation experiment and worked in a leading position for the processing of the inaugural Soyuz TMA-M mission in 2010 and he also helped ready Soyuz TMA-21 for launch before finally receiving his Test Cosmonaut certification and a flight assignment for ISS Expedition 39/40 in 2014. As part of his mission, Artemyev logged 169 days off the planet and completed two EVAs totaling 12.5 hours.

In the left seat of the Soyuz MS-08 spacecraft will be Hubble veteran Drew Feustel. He comes from a science background, earning a PhD in Geological Sciences before working in industry for five years ahead of his selection by NASA in 2000. Feustel served as a Mission Specialist on one of the most notable space flights in the current century: the final servicing mission to the Hubble space telescope in 2009. As part of the STS-125 mission, Feustel completed three of the five back-to-back spacewalks required to maintain and upgrade the storied space telescope.

Feustel first visited the International Space Station in May 2011 aboard Space Shuttle Endeavour, marking the penultimate mission of the Space Shuttle before its retirement. During that mission, Feustel added another three EVAs to his record, placing him in the Top 20 on the all-time list with over 42 hours spent spacewalking. On his two Shuttle flights, Feustel spent 28 days in space.


Completing the Soyuz MS-08 crew is Ricky Arnold, riding uphill in the right seat on his first long-duration space mission. He started out as a Marine Scientist conducting research before moving into teaching at various American International Schools across the globe. NASA selected him as a Mission Specialist-Educator in 2004 and he first flew into space aboard Space Shuttle Discovery on STS-119 that delivered the final Truss Segment and Solar Array Wings to the Space Station.

Arnold also is an experienced spacewalker, conducting a pair of excursions to help integrate the S6 truss segment, collecting 12.5 hours of EVA time. On his previous space mission, Arnold circled the Earth 202 times over a 13-day period.

Because of ISS crew re-shuffles in 2017, the three Soyuz MS-08 crew members were not part of a backup assignment and focused on flight-specific training operations after all Artemyev was officially added to the crew with less than one year before liftoff. The three crew members checked off final Soyuz and ISS training exams at the Gagarin Cosmonaut Training Center in February and flew to the Baikonur Cosmodrome on Sunday for their final launch campaign.

Hitting the ground running at Baikonur, the three crew members completed an initial visit to their Soyuz MS-08 spacecraft (No. 738) at the processing facility of Site 254 on Monday. Next, they suited up in their Sokol Launch and Entry Suits for a fit and leak check before returning to the processing hall to complete a suited ingress exercise and a checkout of the Flight Control System of the Soyuz spacecraft. Their backups, Alexey Ovchinin and Nick Hague shadowed the prime crew’s activities on Monday as they are on stand-by for Soyuz MS-08 before transitioning to the prime crew for the MS-10 mission targeting liftoff in September.

With the crew’s initial visit complete, the Soyuz spacecraft will be moved for hazardous processing over the coming days to be loaded with maneuvering propellant and pressurized gases for its environmental control system. The seven-metric-ton spacecraft will then return to the Site 254 processing hall for final inspections, encapsulation in the protective launch shroud and the transfer to the MIK launcher integration facility where its Soyuz FG rocket is already waiting in a pre-assembled state.

For the crew, the coming days are dedicated to final procedure reviews and conference calls with Mission Control Centers around the world as well as the resident ISS crew members Anton Shkaplerov, Scott Tingle and Norishige Kanai to ensure the new arrivals will be able to press into regular ISS operations right away. The crew will also participate in the numerous traditions in place for launches from Baikonur before having some quiet time ahead of launch day.

Soyuz FG is targeting liftoff from Site 1/5 at 17:44 UTC on Wednesday, March 21st and will be in action for just under nine minutes to send the Soyuz spacecraft and its three crewmen into a 200-Kilometer Low Earth Orbit to catch up with ISS through the tried and true 34-orbit rendezvous profile. Docking is planned around 19:41 UTC on March 23 at the Station’s space-facing Poisk module.