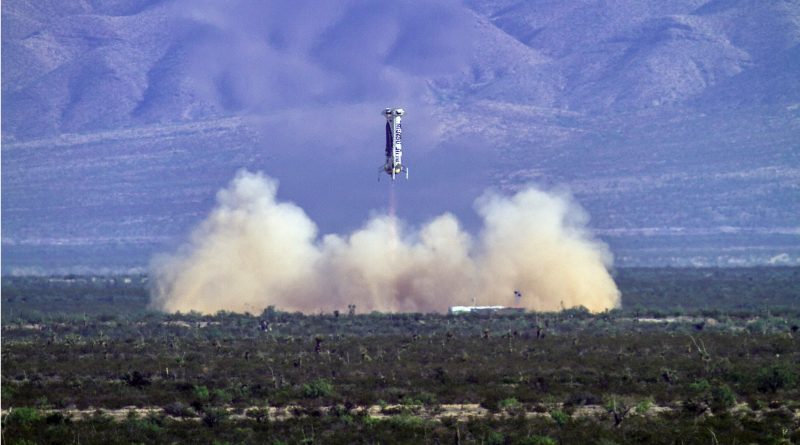 Blue Origin’s New Shepard Sub-Orbital Launch Vehicle soared into the skies over West Texas on Sunday in the company’s fifth high-altitude test flight of their reusable launch system, the fourth flight for this particular vehicle.

New Shepard ignited its cryogenic BE-3 engine at 14:35 UTC and completed a two-minute propulsive flight phase, lifting the Crew Capsule onto a path taking it above the boundary of space for a brief microgravity flight. While the ascent has become standard business, all eyes were on the descent of the Propulsion Module to a powered landing and the gentle glide of the Crew Module to a parachute-assisted landing with one of its three chutes deliberately disabled.

It was the first Blue Origin mission to be webcast live on the Internet via the company’s website in a recent openness as efforts progress towards the start of crewed missions next year, pending outcome of the remaining flight tests.


New Shepard’s first flights were not announced in advance and only made public via heavily produced videos released in the days after completion of the missions. For the previous flight, Blue Origin founder Jeff Bezos provided a live play-by-play via Twitter and the company opened its production facility to journalists back in March.

This new openness indicates a strong confidence of the company in the reliability of their vehicles as well as a transition from a purely development-oriented test program to marketing of flight opportunities and advertising to customers through transparency in the company’s efforts – aiming to become a leading space tourism provider in the not too distant future.

Virgin Galactic – arguably the biggest competitor to Blue Origin with their SpaceShipTwo craft – wished the company good luck via Twitter, adding “We’ll be cheering for you. Space needs all of us!”

The first re-flight of New Shepard was a full success, coming just two months after the first flight of the system and demonstrated Blue Origin’s re-use ambitions, aiming for rapid re-flights of New Shepard with minimal refurbishment efforts. In April, the Propulsion Module and Crew Capsule flew for the third time, again without any issues in launching and landing the two components.

Over the course of the testing program, Blue Origin continued to refine the landing sequence of the BE-3-powered Propulsion Module. While the first flight showed a rather large correction maneuver when close to the ground to aim for the center of the landing pad, the second flight featured an improved algorithm to prevent last-second correction maneuvers when the vehicle was already over the pad – not aiming for a center landing at any cost.

Flight 3 in April demonstrated a later re-start of the BE-3 engine for its landing burn, giving the vehicle less time to slow down and correct any margins in an effort to provide additional propellant margins for the primary mission. The mission was also the first to carry pathfinder science payloads, hitching a ride on the early New Shepard test missions to complete microgravity studies and validate the vehicle for application in science. To further improve the New Shepard system, Flight 3 introduced a beefed up Reaction Control System on the Crew Capsule to increase the vehicle’s efficiency.

As it rumbled uphill, the vehicle made a small divert maneuver to move away from its launch pad passed Mach 1 around ten Kilometers in altitude.

The vehicle reached a top speed of Mach 2.8 when shutting down its engine and releasing the crew module. In-flight commentary indicated the vehicle reached an apogee of 101.0 Kilometers, once again passing the internationally recognized boundary of space.

The Crew Module separated from the Propulsion Module and enjoyed four minutes of very clean microgravity before beginning its descent through the atmosphere. Parachute deployment 7.5 minutes after liftoff was clean with one of the three blue-and-orange chutes intentionally disabled to test out whether the Capsule could land safely on two chutes.

While theoretically possible on paper, testing a two-chute landing in practice is important to evaluate the redundancies in place to return potential customers to a safe landing even in case of an off-nominal flight event.

Descending to the ground, the Crew Capsule appeared stable and ignited its landing thrusters only moments before touchdown. Blue Origin will be looking at the Capsule’s landing speed and forces encountered at touchdown before declaring the two-chute landing a full success, making sure no crew members would be harmed in this precise scenario.

For the Propulsion Module, the descent from the edge of space was considerably faster, falling back to Earth after passing its high-point. Eight drag brakes slowed the craft’s fall and actuated fins guided it to a position over the landing pad, battling crosswinds in the denser layers of the atmosphere.

Ignition of the BE-3 engine occurred just over one Kilometer in altitude with a mere seconds to impact in case of a sluggish ignition of the powerplant. Thrust build-up was swift and New Shepard rapidly slowed down before the engine went through a heavy throttling sequence to place the craft into a steady descent towards its concrete landing pad.

This flight used a more aggressive landing scheme with greater tilt angles as the Propulsion Module came in for its landing. Four landing legs deployed prior to touchdown and made gentle contact with the ground to mark the completion of the fourth flight of this particular vehicle.

Sunday’s mission carried three Pathfinder Payloads developed by American and German institutions to study fundamental physical phenomena in a clean microgravity environment, as provided by New Shepard on its brief sub-orbital arc. The three experiments are described in detail here:

EITIC – the Effective Interfacial Tension Induced Convection Experiment – was developed by Louisiana State University to test a decades old theory stating that fluid motion can be observed in two mixable fluids when thermal differences exist within the fluids.

However, this process is masked by the influence of gravity when experimentation is conducted on Earth. EITIC flies small fluid containers with a mix that becomes miscible when heated to a certain temperature to generate the flow phenomenon, to be studied by means of suspended particles in the fluid illuminated by laser light.

Another fluid physics experiment – Three-Dimensional Critical Wetting Experiment in Microgravity – studies a system of a gas and a liquid in a spherical container with rotating vane structures.

Mathematical models for this kind of system will be beneficial in the development of propellant management and life support systems of future spacecraft where the interaction of a gas-liquid mix with tanks walls and other structural elements is a major factor.

The third study on this flight consisted of three vibrating tubes with small grains of material to examine low-speed collisions in microgravity to learn more about planet formation as slow collisions of dust grains and dust aggregation are believed to play an important role in this process. Cameras captured the collisions of grains at 500 frames per second to document micrometer-sized grains sticking together in certain collision geometries.