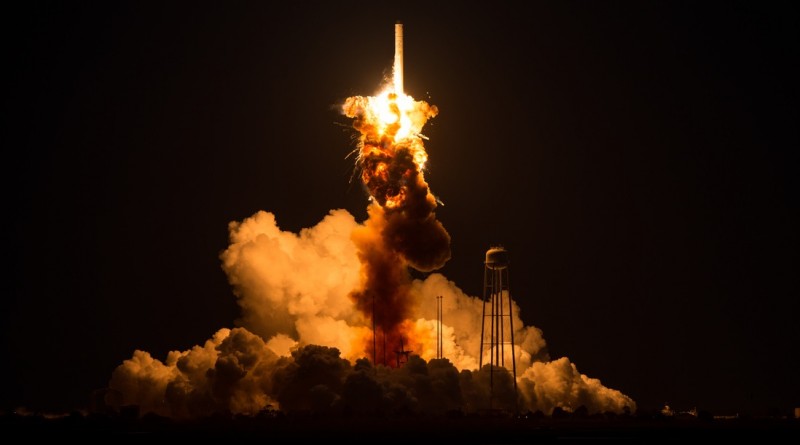 An independent team of NASA investigators blames last year’s failure of Orbital ATK’s Antares on the rocket’s main engines, as stated in the Orb-3 Accident Investigation Report released by the agency on Thursday, marking the one-year anniversary of Antares’ spectacular launch failure. The report identifies three potential causes for an explosion occurring within the oxygen turbopump of one of the rocket’s two AJ26 engines and also highlights a lack of knowledge and insight into the design and history of the Soviet-built main engines.

Orbital’s Antares rocket lifted off from Pad 0A at the Mid-Atlantic Regional Spaceport at Wallops Flight Facility on October 28, 2014 just after 22:22 UTC, carrying the Cygnus Orb-3 spacecraft loaded with over two metric tons of supplies for the International Space Station. Leaving its pad, Antares operated its twin AJ26 engines at a thrust level of 108% of rated performance, generating collective liftoff thrust of 332 metric-ton-force.


The third operational Commercial Resupply Services mission undertaken by Orbital found a premature end just 15 seconds after Antares left the launch pad when an explosion occurred in the engine compartment of the 42.5-meter tall rocket. The termination of thrust from the engines caused the rocket to fall back onto is pad, resulting in a powerful explosion that caused extensive damage to the pad facility and nearby buildings. There were no injuries, owed to the strict safety measures, implemented as far as range safety and blast danger area clearance is concerned.

An investigation into the dramatic failure began right away, conducted by Orbital’s Accident Investigation Board with participation of all involved parties including engine manufacturer Aerojet Rocketdyne and the Federal Aviation Administration that issued the launch license for Antares. Initially, the company was transparent in sharing the progress of the investigation into the mishap and within a week of the event reported that the leading suspect was a failure within one of the engine turbopumps. However, after this initial transparency, Orbital ATK and Aerojet Rocketdyne went silent. One year passed since the failure and there has been no official word on the outcome of the investigation from Orbital’s side.

The leading suspect in the investigation, Aerojet-Rocketdyne’s AJ26 engine, represents imported NK-33 engines built in the 1960s and 70s by the Kuznetsov Design Bureau for the Soviet N1 Moon Rocket. The engines never flew on the N1 since the program was ended after all test launches of the rocket ended in failure and the race to the Moon was long lost. Aerojet Rocketdyne purchased 43 NK-33 engines that were imported to the U.S. to be used on American launchers. Orbital Sciences elected the AJ26 for the Antares rocket due to the lack of alternatives and the excellent thrust-to-weight ratio offered by the AJ26 when compared with US-built powerplants.

The conversion process from the NK-33 to the AJ26 includes the removal of the engine harness, the addition of U.S. electronics and engine controllers to support the implementation of of electromechanical valve actuators in the propellant system, modifications to the fuel systems, and the addition of a hydraulic thrust vector control system.

NASA’s Independent Review Team (IRT) began work in November 2014, being given access to launch vehicle telemetry, photos and video capturing the launch failure as well as recovered hardware including engine components on which forensic analysis was performed.

The IRT concluded that the proximate cause of the launch failure was an explosion in the Liquid Oxygen turbopump of the AJ26 engine installed in the Main Engine 1 position.

The explosion on this engine, designated E15, resulted in damage to the second engine, E16, leading to the loss of thrust on the rocket. Through in-depth analysis of the engine design and recovered components it was furthermore determined that the cause of the turbopump explosion was a loss of rotor radial positioning leading to contact between the rotating and stationary components of the Hydraulic Balance Assembly seal package. The frictional rubbing between the metallic components provided the ignition source for the fire within the LOX turbopump Hydraulic Balance Assembly.

The investigation was unable to single out one definitive root cause for the explosion on E15 and provided three credible root cause scenarios of which any one or a combination could have resulted in the observed failure mechanism.

1) The IRT identified the Hydraulic Bearing Assembly and thrust bearing of the LOX turbopump design to present several sensitivities that can lead to difficulty in reliably managing loads on the bearing in operation. It was determined that these components were vulnerable to oxygen fires which could have been revealed as part of sensitivity analyses. The Acceptance Test Program of AJ26 engines was found to be insufficient to screen engines for these design intricacies because even tests involving twice the burn duration of an Antares flight could not demonstrate the bearing life margins due to the non-linear behavior of the LOX turbopump rotor.

2) The IRT was unable to rule out a contribution of Foreign Object Debris to the destruction of the LOX turbopump. Both titanium and silica were found to have entered the engine prior to the rocket’s impact. Available data did not permit an assessment of the quantity of debris ingested by the engine, however, a lack of particle impact damage on the turbopump impeller suggests that no significant debris ingestion occurred.

3) The forensic test campaign on the failed engine revealed a material defect on the turbine housing bearing bore. It was determined with certainty that this defect was introduced either in the manufacturing process or as the result of extensive engine operation and therefore was present when E15 finished its Acceptance Test Program.

Additional analysis performed on the E17 engine that suffered a failure on the test stand in May 2014 revealed a similar defect. Other engines inspected after the failure were E16 on which no defects were found and a test engine acquired in 1998 that had been subjected to extensive ground testing. The 1998 engine showed a similar defect to that seen on E15 and E17, however, the investigation was unable to determine whether the defect was introduced during production or caused as the result of wear from extended operation of the engine.

Additional findings by the IRT identified that the instrumentation on the AJ26 engines both for ground testing and in flight was not adequate to gain sufficient insight into the performance of all engine components.

A number of programmatic findings were published by the investigation, identifying an apparent lack of understanding of the risks associated with the launch vehicle design and a particular mission for reasons such as a varying risk perception within NASA organizations, a lack of communications due to the proprietary nature of technical information on the launch vehicle and the absence of an integrated partnership between Orbital ATK and engine supplier Aerojet-Rocketdyne.

The IRT expressly noted a lack of technical, operational and historical knowledge of the NK-33 engine within Aerojet-Rocketdyne and Orbital ATK. Not having a full picture of the technical design of NK-33 and its past failure history, neither Aerojet-Rocketdyne nor Orbital ATK were in a position to provide a realistic loss-of-mission prediction for the Antares rocket.

Closing out the investigation into the Antares launch failure, Orbital ATK is progressing on two fronts – the overall goal is to return Antares to flight in mid 2016 but also keep up the company’s obligations to the International Space Station program by flying a pair of interim Cygnus cargo missions using the Atlas V launch vehicle. The Orb-4 mission which will be the first flight of the enhanced Cygnus spacecraft with an increased cargo capacity is currently set for December 3.

While the Orb-4 Cygnus is being readied at the Kennedy Space Center, Orbital ATK is in the midst of outfitting its Antares rocket with new engines at the Wallops Flight Facility. Even before the Orb-3 failure, Orbital ATK was already on a path to switching Antares to new engines due to the limited availability of the AJ26/NK-33 that is no longer in production.

Orbital ATK signed a contract with NPO Energomash, procuring Energomash’s RD-181 engines for future use on the Antares 200/300 series. RD-181 is the export version of the RD-191 engine which itself is the little brother of the two-chamber RD-180 engine used on the Atlas V rocket. The single-chamber RD-191 is used by Russia’s new Angara launch vehicle fleet and offers a better performance than the old NK-33 with the added capability of deep throttling. Initially, Antares will use the leftover core stages from the 100 series and outfit them with RD-181 engines – representing the 200 series – before modifying the first stage dimensions when transitioning to the 300 series vehicle to increase the tank sizes in order to get the most performance from the more powerful RD-181 engines.

Integration of the first pair of RD-181 engines to the Antares first stage has been completed by Orbital ATK on a path to hot-fire testing in the coming months.

The $15-million repair effort at the MARS launch facility has been completed by the Virginia Commercial Space Flight Authority in late September and the facility has been again handed over to Orbital ATK for ground systems testing ahead of moving the modified Antares rocket to the pad for the first time on the road to the expected return to flight next year.