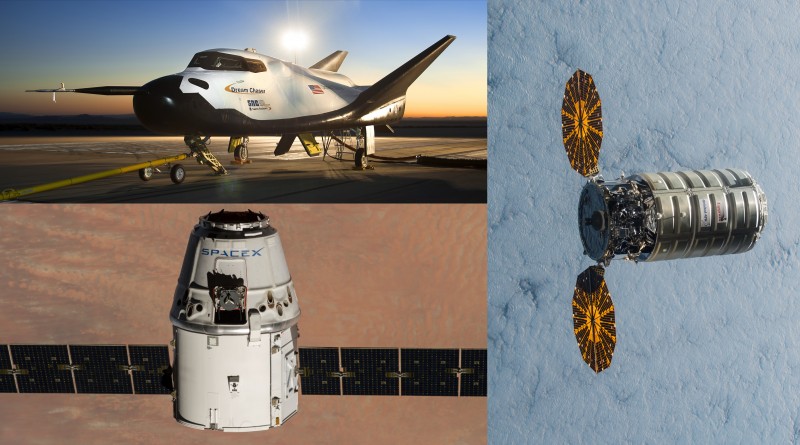 NASA announced this week the winners for the second round of Commercial Resupply Services contracts for cargo missions to the International Space Station beginning in 2019 and lasting through the currently projected end of ISS operations in the mid-2020s. Selected were Orbital ATK and SpaceX, currently flying cargo to ISS under the first CRS contract, along with Sierra Nevada and its unpiloted miniature space plane Dream Chaser.

Dream Chaser, originally designed to fly with astronauts, can carry up to 5,500 Kilograms of cargo to the Space Station and is capable of returning items in a low G-force re-entry and gentle runway landing. To date, Dream Chaser has not flown to space but is gearing up for its debut mission atop an Atlas V in 2018.

NASA’s current CRS providers Orbital ATK and SpaceX also received renewed contracts under CRS-2 – giving the U.S. three resupply craft after failures encountered by both Orbital ATK and SpaceX made clear that redundancy in launch vehicles and spacecraft is a necessity in ensuring a steady chain of supplies to ISS, especially once the U.S. Segment of ISS transitions to operations with a four-person crew.


NASA turned to the commercial sector for cargo missions to ISS with the first multi-billion Commercial Resupply Services Contracts in 2008 awarded to SpaceX and Orbital ATK. Recently, the CRS-1 contracts were extended to include additional missions through 2018 to bridge the gap to the start of CRS-2. Originally, the CRS-2 contract winners were expected to be announced in early 2015 but the selection slipped throughout the year, making an addition of CRS-1 flights necessary.

The retirement of the Space Shuttle prompted the decision to contract commercial providers for crew and cargo flights to Low Earth Orbit while NASA focuses on missions beyond Earth orbit with its heavy-lift launcher SLS and Orion Spacecraft. Commercial crew flights to the Space Station are currently expected to begin in 2017 with SpaceX’s Dragon 2 and Boeing’s Starliner spacecraft.

“One of the considerations from an operational standpoint with ISS is it’s really important to have more than one supply chain, and multiple offerers means that at any given time, the sequence of flights could be one Sierra Nevada, Space, Orbital ATK, so if you lose one, you have the ability for another one being right after it from a dissimilar redundancy, or a different supplier – so that’s a big help to us,” said NASA’s International Space Station Program Manager Kirk Shireman.

Orbital ATK’s Antares rocket experienced a spectacular close-to-ground failure in October 2014 on the Cygnus Orb-3 mission while SpaceX’s Falcon 9 rocket ran into trouble in June 2015, falling apart in mid air when carrying the SpX-7 Dragon spacecraft. The two failures caused a multi-month stand down for both rockets. While SpaceX aims to get back on track with its ISS manifest in March, Orbital ATK purchased two Atlas V rockets to lift the Cygnus spacecraft into orbit for two interim missions while the company re-fits the Antares with new engines.

These two failures showcased that even with two cargo providers, a scenario where both are not available for an extended period of time is more than realistic – prompting NASA to select a third company to ensure the supply chain to ISS with the U.S. operators working alongside the Russian Progress and Japanese HTV to send food, fuel and supplies to the orbiting laboratory.

The CRS-2 contracts include a guarantee that each selectee will fly at least six missions in a program that has a total value capped at $14 billion, though the Station’s cargo needs should fall well short of the cap. NASA can order additional missions beyond each company’s six guaranteed flights based on the price, capability and past performance of the vehicles that are on offer.

Dream Chaser’s selection was met with joy at Sierra Nevada’s Colorado base after the team had to go through a rather tough time after losing out on NASA’s Commercial Crew funding.

Financial details were not revealed by NASA, but Orbital ATK stated that their first six flights will cost NASA $1.2 to $1.5 billion. Sierra Nevada and SpaceX did not disclose any figures.

Also part of the CRS-2 program is the introduction of mission flexibility in the form of different mission scenarios NASA can choose from to match the current needs of the Space Station. Orbital ATK proposed three different mission types – two for the delivery and disposal of pressurized cargo and one to deliver and dispose of large external payloads using a specialized version of the Cygnus spacecraft. Additionally, Orbital ATK offers to NASA a choice in launch vehicles as Cygnus can fly on the company’s improved Antares rocket and ULA’s Atlas V.

Sierra Nevada outlined a pair of mission scenarios, both to carry internal and external cargo to ISS, dispose of no-longer needed items and return performed experiments and hardware to Earth. Also, Dream Chaser can be outfitted with different docking systems, allowing the spacecraft to complete an automated docking to ISS or be captured by the robotic arm as is done with Cygnus and the cargo version of the Dragon. While the docked mission scenario provides the ability of using Dream Chase to reboost the Station, a berthing will enable the spacecraft to sport a larger CBM hatch for the transfer of big cargo items.

SpaceX’s proposal also included different options though no details were revealed, but likely also include the possibility of flying a cargo-version of Dragon 2 that could dock automatically and conduct a landing on land. The overall goal of the CRS-2 program is to increase the cargo upmass delivered on each flight and reduce the number of overall flights in order to preserve crew time for ISS utilization activities since each visiting vehicle arrival and departure requires valuable time that could be spent doing research.

“The second generation of commercial cargo services to low-Earth orbit begins today,” said Shireman. “By engaging American companies for cargo transportation, we can focus our attention on using this one-of-a-kind laboratory in the sky to continue advancing scientific knowledge for the benefit of all humanity.”