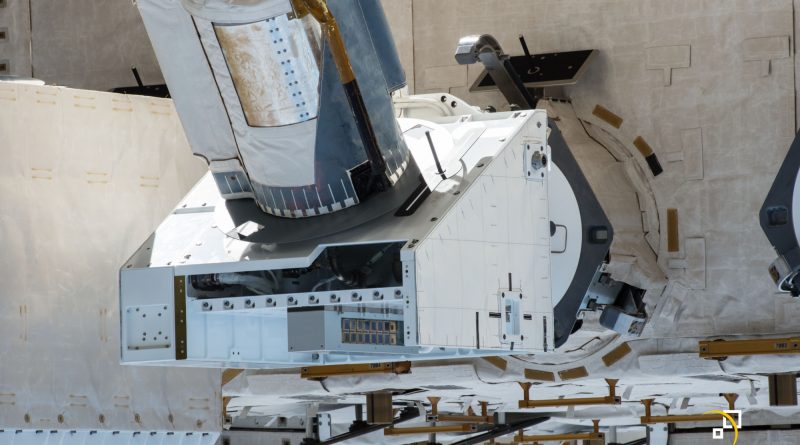 Above: Sped-up video of robotic work outside the Japanese Experiment Module on April 28, 2017 covering the installation of the NanoRacks External Platform (NREP), starting its second mission to expose experiments to the space environment.

NREP is an external payload facility that can host compact research payloads in the space environment for educational institutions and commercial customers. NREP is a self-funded development by NanoRacks and is the first commercial platform that allows payloads to be subjected to the space environment for an extended period of time before being returned to Earth for laboratory analysis.

The NREP was fitted with a pair of new experiment payloads by NASA Astronauts Peggy Whitson and Jack Fischer before being placed in the Kibo module’s equipment airlock for transfer to the outside of the Space Station. The extensible slide table moved the NREP within reach of the Japanese Robotic Arm that then took control of the platform and moved it into position for mechanical attachment to the JEM Exposed Facility, automatically connecting electrical and data lines. NanoRacks reported full success of the installation this week as both payloads began downlinking data.

Charge Injection Devices are considered the future of image detectors for cameras utilized in various space and Earth-based applications as they enable pictures of scenes with varying brightness, allowing simultaneous imaging of extremely bright and very faint objects which is not possible with current detector technology. The NanoRacks CID study aims to examine whether CIDs can function in the space environment, paving the way for their use in future space-based telescopes for the study of Exoplanets.

CIDs are read-out on a pixel-by-pixel basis – meaning that individual pixels can be addressed without affecting surrounding pixels which enables them to capture faint objects next to high-intensity sources without glare from the brighter object affecting the image of the faint target. This could permit a future space telescope relying on CID technology to photograph an Earth-like planet around a bright host star which is impossible with the current state of technology.


The latest advances of CID technology accomplished a significant reduction of image noise to the point CIDs can match current off-the-shelf CCD detectors. However, CIDs are not yet space qualified and stand at Technology Readiness Level 4. Through the NanoRacks CID experiment, the TRL should be advanced to Level 7, clearing the way for a future CID-based space observatory.

The CID experiment is expected to run for six months during which the imaging system captures an internal scene contained within the payload. Data collected over an extended period will show changes in contrast ratio abilities, noise, bias level and dark currents that could be caused by the challenging space environment.

The second experiment hosted by the NREP is known as Dependable Multiprocessing 7 (DM7) and examines the performance of a commercial-off-the-shelf processing module for future use on CubeSat missions that could enable a 10x to 100x increase in processing capability vs. state-of-the-art radiation hardened processors that come with a much higher price tag and are usually two or three generations behind COTS technology.

NREP hosts interfaces that can attach it to the Exposed Facility of the Japanese Experiment Module’s payload accommodations (Flight Releasable Attachment System) through which power and data connectivity is provided. The platform itself has its own power distribution system that can deliver power to installed experiments as required and an onboard computer routes commands send on customer request from the ground to the payload and science data from the payload to the ground through ISS communications assets.

Payloads can be attached and removed from NREP in a plug-and-play fashion, to be returned to the inside of ISS via the JEM robotic arm and the Kibo airlock for eventual return to the ground.

Completing all these operations without the need for a spacewalk to install/retrieve payloads allows access to space exposure research to a multitude of institutions from universities to private industry.