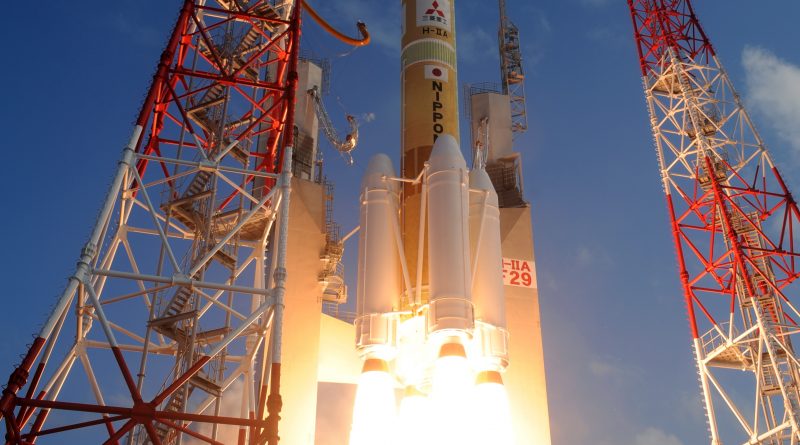 London-based satellite operator Inmarsat has chosen Japan’s Mitsubishi Heavy Industries as launch services provider for the company’s first sixth generation communications satellite. Inmarsat-6 F1 is targeting liftoff in 2020 on MHI’s H-IIA launch vehicle that completed its first 100% commercial mission in 2015 and has been emerging as a player on the commercial launch market since.

Inmarsat – a leading mobile communications provider founded in 1979 – operates a series of communications satellite to deliver services across the globe with the company’s most recent satellite generation, Inmarsat Global Xpress, reaching completion in 2017 to deliver global data services via a fleet of four high-powered Ka-Band satellites.

The sixth Inmarsat generation will host a dual-mission payload, offering Ka-Band services to add further depth to the Global Xpress Constellation while an L-Band payload adds a new generation of low-cost mobile services and Internet Of Things (IOT) capabilities.

Inmarsat awarded a $600 million contract to Airbus Defence and Space to develop the first two Inmarsat-6 communications satellites based on the EuroStar E3000e platform, an all-electric-propulsion variant of the flight-proven E3000 platform. The satellites are taking advantage of the mass reduction enabled by purely electric-driven propulsion, allowing the craft to carry a payload for a dual-mission with an exceptionally large digital processing payload.


The Inmarsat-6 satellite will host a nine-meter diameter L-Band antenna and nine multi-beam Ka-Band antennas; the advanced digital processor will deliver full routing flexibility over up to 8,000 channels and dynamic power allocation to over 200 L-Band spot beams to respond to changing demands in an architecture with maximum flexibility. The Ka-Band payload will deliver steerable spot beams to direct coverage where it is needed, when it is needed with the addition of flexible channel-to-beam allocation.

“Inmarsat is delighted to select MHI and its H-IIA launch vehicle for the first of our sixth generation satellites,” said Inmarsat CEO Rupert Pearce. “Inmarsat is continually seeking to extend and diversify its ecosystem of partners, particularly in the strategically important area of launch providers.  We believe that MHI and its H-IIA launch vehicle offers a world-class service.”


Japan’s H-IIA rocket debuted back in 2001 and has since enjoyed a career with 34 successful missions out of 35 launches. Initially produced and managed by the Japan Aerospace Exploration Agency, the H-IIA rocket was handed over to Mitsubishi Heavy Industries (MHI) in 2007 to handle production and operation of the launch vehicle, also receiving clearance for offering the vehicle on the commercial market.

Business was slow to non-existent on the commercial launch market for the H-IIA, flying with payloads for JAXA and the Japanese government with the occasional commercial secondary payload hitching a ride on the vehicle. This changed when Canada’s Telesat decided to place their Telstar 12 Vantage satellite on an H-IIA for launch in 2015.

This was the result of an overall shift within the commercial industry that saw satellite operators opt for higher-priced launch vehicles in favor of a timely launch at high schedule certainty.

At the time, popular launch providers like Arianespace were looking at a packed manifest and the company’s dual-satellite launch scheme comes with the drawback of being dependent on the readiness of a co-passenger. SpaceX also faced a full backlog, exacerbated by the in-flight failure of a Falcon 9 rocket in 2015 that resulted in a half-year stand-down of launch operations. The other big name in the commercial business, Russia’s Proton rocket, also faced its own reliability struggles and saw customers opt for alternatives.

These factors led to a number of satellite operators moving to other rockets such as Atlas V or H-IIA that normally see most of their business coming from government missions.

MHI director of space systems business development, Ko Ogasawara, noted at World Satellite Business Week that the company persuaded Inmarsat with attributes other than a competitive launch price such as H-IIA’s reliability and on-time record. For MHI, Inmarsat-6 F1 is the second 100% commercial contract received for H-IIA.

Inmarsat has yet to select a launch vehicle for the second Inmarsat-6 satellite, but company CEO Pearce noted the company was paying attention to MHI’s future developments. “With the development of the new H3 launch vehicle, it is clear that MHI is committed to continuing innovation,” he said in a press release. “These are attributes that we seek in our partners and we look forward to a long and fruitful relationship with MHI as one of our roster of launch partners.”


MHI and JAXA are developing the H3 launch vehicle on the basis of the H-II rocket with the major goal of cutting current launch costs in half by reducing complexity in the engine system and optimizing manufacturing techniques – aiming for a launch cost of 50 to 65 million USD.

H3 broadens the diameter of the rocket’s core stage to 5.2 meters and switches from the staged combustion design of H-IIA’s LE-7A main engine to two or three LE-9 engines on the first stage, using a simpler expander cycle while increasing the overall size of the engine to deliver more thrust. The rocket’s second stage will retain H-IIA’s LE-5B with some design changes to reduce risk and cut costs. Up to four SRB-3 Solid Rocket Boosters can be added to the rocket’s first stage to cater to a mission’s specific performance needs.

H3’s 63-meter tall baseline version is suitable for launches of satellites up to four metric tons into a Sun Synchronous Orbit, targeting a maiden launch in fiscal year 2020. The H3 variant with boosters, targeting a FY2021 debut, will be able to lift at least 6.5 metric tons into a GEO-1500m/s Geostationary Transfer Orbit. JAXA said development is on track to meet the target inauguration dates with LE-9 engine testing recently proceeding into full-duration test firings.