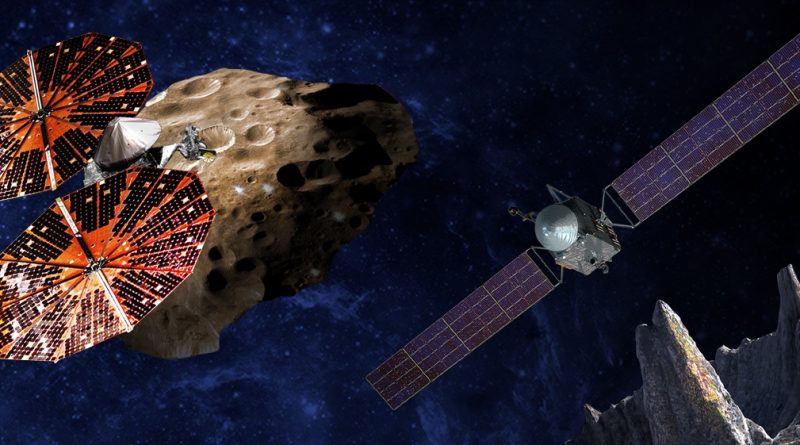 NASA announced on Wednesday the selection of the Lucy and Psyche missions as the agency’s next Discovery missions placing full focus on the study of asteroids as windows into the earliest eras of our Solar System. The two missions are aiming for launch in 2021 and 2023 with Lucy homing in on Jupiter’s Trojan asteroids while Psyche will visit a giant metallic asteroid.

The two missions were chosen from five finalists, winning over a proposed Near Earth Object Camera to discover ten times more near-Earth object asteroids than are known to date, and a pair of Venus missions to study the planets atmosphere and hidden surface. Lucy and Psyche place full focus on the study of asteroids which offer a view into a deep past, having formed less than 10 million years after the birth of the sun – a blink of an eye in a geologic sense.


“Lucy will visit a target-rich environment of Jupiter’s mysterious Trojan asteroids, while Psyche will study a unique metal asteroid that’s never been visited before,” said Thomas Zurbuchen, associate administrator for NASA’s Science Mission Directorate. “This is what Discovery Program missions are all about – boldly going to places we’ve never been to enable groundbreaking science.”

Lucy is penciled in for departure in October 2021 on a four-year journey to its first destination – an asteroid in the main belt that will be studied before Lucy moves on to Jupiter’s Trojan asteroids which share the orbit of Gas Giant Jupiter, kept in a position leading and trailing planet by the interplay of the gravitational forces of Jupiter and the sun. Between 2027 and 2033, Lucy will explore six Jupiter Trojan asteroids.

Jupiter’s Trojans likely hold clues to deciphering the history of the solar system and Lucy can take advantage of a fortuitous orbital configuration to study multiple of these objects in a landmark investigation. Scientists suspect that Jupiter’s Trojans formed throughout the solar system and were captured after planetary formation. Therefore, it is important to sample their diversity to realize their true scientific potential in revealing the parent materials that accumulated in the inner Solar System.

Lucy will build on the success of NASA’s New Horizons mission to Pluto and the Kuiper Belt, sporting new versions of the Ralph and LORRI science instruments that, in large part, were responsible for the impressive data set gathered from the mission’s 2015 flyby of Pluto. Lucy will also build on the recently-launched OSIRIS-REx mission to asteroid Bennu, employing the OTES thermal emission spectrometer. Team members from New Horizons and OSIRIS-REx are contributing to the Lucy mission.

“This is a unique opportunity,” said Harold F. Levison, principal investigator of the Lucy mission from the Southwest Research Institute. “Because the Trojans are remnants of the primordial material that formed the outer planets, they hold vital clues to deciphering the history of the solar system. Lucy, like the human fossil for which it is named, will revolutionize the understanding of our origins.”

Psyche sets out to explore one of the most intriguing targets in the Asteroid Belt – 16 Psyche, a large metallic asteroid that stands out among a large population of rocky and icy bodies roaming in a zone between the orbits of Mars and Jupiter. Measuring 210 Kilometers in diameter, Psyche is thought to the comprised of metallic iron and nickel, similar to Earth’s core.

Scientists wonder whether Psyche could be an exposed core as a remnant of an early planet that could have been as large as Mars but lost its outer layers in violent collisions over billions of years. The opportunity of studying a planetary core is extremely appealing to scientists because normally, cores are hidden and can only be explored through seismic, magnetic and gravitational studies. No one has ever seen a planetary core or directly measured its composition – explaining why Psyche was selected.

If Psyche is indeed a stripped planetary core, the mission’s instruments would reveal so through analysis of the silicate materials that make up around 10% of the body and provide a sure indication of its origin. The Psyche instrument suite comprises magnetometers, multispectral imagers, a gamma ray and neutron spectrometer, and a radio-science experiment. Should the metallic world indeed turn out to be a stripped planetary core, the Psyche mission would be able to deliver unprecedented data on how planets and other bodies separated into their layers, also shedding new light on how our own planet evolved.

Psyche is targeting launch in October 2023 with an Earth flyby one year later and a Mars flyby in 2025 before ultimately arriving at its target in 2030.

“This is an opportunity to explore a new type of world – not one of rock or ice, but of metal,” said Psyche Principal Investigator Lindy Elkins-Tanton of Arizona State University. “16 Psyche is the only known object of its kind in the solar system, and this is the only way humans will ever visit a core. We learn about inner space by visiting outer space.”

In addition to selecting Lucy and Psyche, NASA also decided to extend funding for the Near Earth Object Camera (NEOCam) for an additional year to continue formulation of the project for possible future selection. NEOCam sets out to systematically survey regions of space close to Earth’s orbit where potential Earth-impacting asteroids may roam.

NASA Discovery missions are capped at a budget of around $450 million and typically include lower-cost, highly focused space missions, compared to more complex missions of the New Frontiers and Flagship Programs. NASA fourth New Frontiers mission is in the midst of its selection process, currently with a group of seven candidates that will be narrowed down later this year ahead of the selection of the winner in 2019.

On Tuesday, NASA announced the selection of the Imaging X-ray Polarimetry Explorer (IXPE) as part of the Astrophysics Explorers Program. The $188 million mission, slated for launch in 2020, aims to operate three polarization-sensitive space telescopes to measure cosmic X-rays emitted by black holes and other sources. Studying the polarization of X-rays coming from the most energetic objects in the universe will deliver new insights into highly energetic processes ongoing in regions that can not be directly imaged.