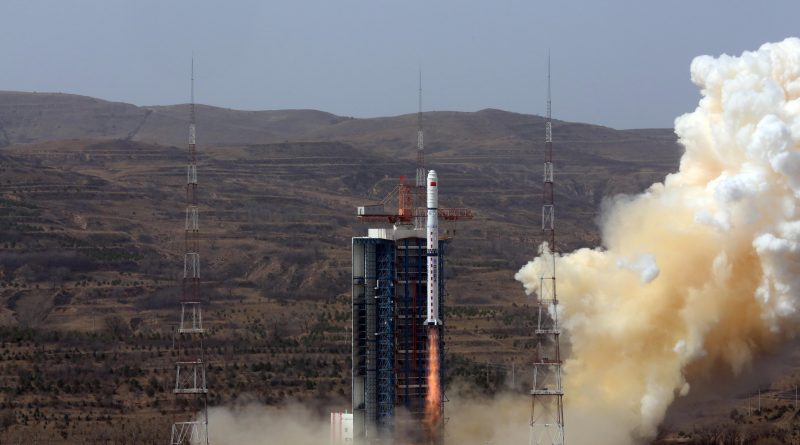 China carried out its tenth successful space launch of the year on Saturday, employing a Long March 4C rocket with extra-extended payload fairing to transport a stack of three Gaofen-1 Earth-observation satellites into Sun Synchronous Orbit. Liftoff from the country’s Taiyuan Satellite Launch Center occurred at 3:22 UTC and Chinese officials were quick to announce the successful orbital delivery of the three newest additions to the Gaofen fleet, named Gaofen-1-02, 03 and 04.


Satellites flying under CHEOS are equipped with a variety of sensors from high resolution, multispectral optical imagers to radar payloads, infrared imagers and microwave payloads as well as specialized sensors. Satellites belonging to CHEOS are operated in different orbits including Low Earth Orbit and Geostationary Orbit to create a range of data products at different qualities and revisit times.

The program’s first launch occurred in 2013 when Gaofen-1, a high-resolution optical imaging satellite, rode into orbit atop a Long March 2D rocket. Outfitted with a pair of High Resolution Cameras and four Wide-Field Imagers, the satellite was reportedly capable of covering a ground swath of 69 Kilometers at a ground resolution of two meters for black-and-white and eight meters for multispectral imagery using the high-resolution payload while the wide-field instrument captured 16-meter resolution imagery across an 830km swath.

Gaofen-2 launched in 2014 and hosts a single High-Resolution Optical Imaging payload reaching a ground resolution of 80 centimeters for panchromatic images and 3.2 meters for multispectral products. Flying under the auspices of the State Oceanic Administration, Gaofen-3 launched in 2016 as the constellation’s first radar satellite – collecting high-quality imagery with a resolution better than one meters using a multi-polarized C-Band Synthetic Aperture Radar for all-day, all-weather imaging.

Taking up residence in Geostationary Orbit in 2015, Gaofen-4 is tasked with the acquisition of near-real-time, high cadence imagery with a staring camera covering the entire Chinese mainland at 50-meter resolution. Gaofen-5 is yet to launch and will host six instruments primarily focused on atmospheric sensing to measure greenhouse gas emissions, trace gases and various other atmospheric properties extracted from a number of multi-spectral payloads.

Per the original Gaofen announcement, the 6th satellite in the series was to be a replacement for Gaofen-1 at the end of its lifetime and Gaofen-7 was to host a hyperspectral stereo-imager.


However, plans apparently changed as Gaofen-6 and 7 are still waiting for launch, though satellites 8, 9 and 10 lifted off in 2015 and 2016 with the last falling victim to a rare Long March 4C launch failure. These additions to the Gaofen fleet, all of them optical satellites, had a strong flavor of either being surplus military reconnaissance satellites donated over to the civilian side or flying under a dual-purpose program between the two sectors. This assumption was made based on the secrecy surrounding their launches and the satellites’ appearance closely resembling members of the Yaogan reconnaissance fleet.

The Gaofen-1 trio launched on Saturday also appears to be taking a page from Yaogan’s playbook, at least by copying the naming convention recently introduced for the Yaogan-30 constellation. Named Gaofen-1-02, -03 and -04, the satellites deployed on Saturday are reportedly similar to the original Gaofen-1 launched in 2013 with the expectation that the 16-meter Wide-Field array is omitted from the new members, likely in an effort to cut mass to enable a three-satellite launch on a single rocket.

Each of the new Gaofen-1 members has a launch mass of 805 Kilograms and hosts two high-resolution cameras capable of collecting panchromatic cameras with a resolution exceeding two meters and multi-spectral imagery at a resolution better than eight meters, covering a swath of at least 66 Kilometers.

According to satellite builder CAST, the Gaofen-1 series satellites were built by its commercial subsidiary China Spacesat Co. Ltd., taking the CAST Small Satellite Bus as a basis. The three satellites are to be evenly spaced by 120 degrees in their orbital plane, operating from a 645-Kilometer Sun Synchronous Orbit with a local time of descending node at 10:30. This three-satellite constellation will offer an orbit repeat cycle of 15 days and a revisit time of two days. During the overlap with the still-operational Gaofen-1-01 satellite, the combined 3+1 constellation will offer one-day revisit coverage with the original satellite in an 11:00 LTDN orbit.

To deliver the three new Gaofen members, Long March 4C launched with its longest available fairing that last flew in 2014 on the Yaogan-25 triplet launch. It was the 270th launch of the Long March rocket family, according to Chinese state media, and the 22nd for the Long March 4C variant.


Long March 4C is derived from the CZ-4B Launcher, but features a re-startable upper stage and can accommodate a larger Payload Fairing. It is operated from the Jiuquan and Taiyuan Satellite Launch Centers.