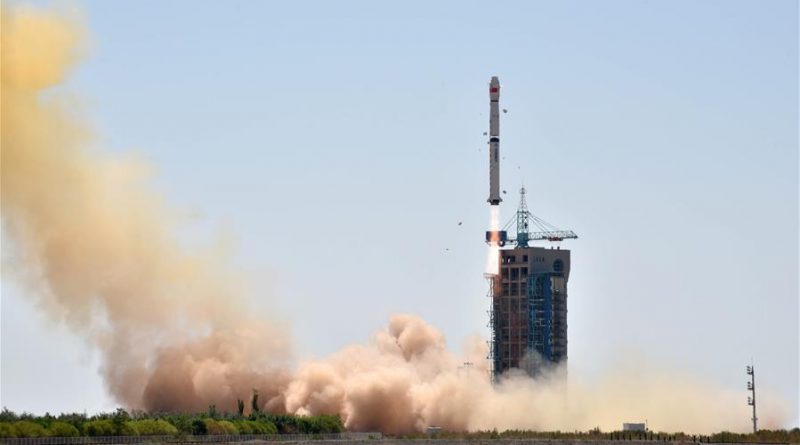 China successfully sent the country’s first X-ray space telescope into orbit on Thursday atop a Long March 4B rocket blasting off from the Jiuquan Satellite Launch Center at 3:00 UTC.

Named Huiyan, the Chinese word for ‘Insight,’ the telescope will be tasked with a scan of the high-energy X- and gamma-ray universe to discover new and short-term X-ray events in addition to pointed observations of ultra-dense neutron stars and black holes.

Formally known as the Hard X-Ray Modulation Telescope, HXMT for short, the spacecraft hosts three different X-ray detectors to cover a broad energy range to be able to observe a variety of sources including the cosmic X-ray background. HXMT combines a very large detector area, purpose-built detectors with modern electronics and a novel demodulation image reconstruction technique to achieve a powerful combination of spatial resolution, spectral resolution and an exceptional time resolution for arriving X-ray photons.


The 2,700-Kilogram space telescope marks the culmination of a project that has been in the works for over two decades. HXMT was first proposed in 1993 and was selected for further study in 2000 to advance into the development stage with an initial plan of launching in 2010. However, these plans could not be realized and the project required funding in three of China’s Five-Year Plans to come to fruition with the final design of the spacecraft frozen in 2011 to proceed into production.

Involved in the HXMT project are the Institute for High-Energy Physics at the Chinese Academy of Sciences and Tsinghua University, both responsible for the X-ray instruments and the science involved in the mission while satellite builder CAST provided the spacecraft platform based on a large Earth Observation Satellite bus that provides the agility and stable pointing capability for HXMT’s X-ray observations.


The instrument deck of the HXMT spacecraft hosts three different instruments covering a broad energy range of 0.7 to 350 kilo-electronvolt and a sector of the sky 1 by 6 degrees in size. All three instruments of the spacecraft are collimated, co-aligned X-ray telescopes using detector technology specific to their energy range.

In the center of the instrument deck are 18 phoswich scintillator modules that convert incoming X-rays into visible light which can be detected with conventional photo-detectors. Arranged in two concentric circles, the modules make up the High-Energy Telescope with a total active area of 5,100cm² and an energy range of 15 to 350keV. The Medium-Energy X-ray telescope, covering energies from 5 to 30 keV, hosts a total of 1,728 Silicon-PIN diodes acting as detectors and the 0.7-15keV Low-Energy X-ray telescope has 96 Swept Charge Devices.

HXMT stands out among other X-ray missions for its combination of high-angular resolution, time resolution and spectral resolution as well as its multi-use capability for all-sky scans and narrow-field pointed observations.

The observatory will be tasked with two different types of measurements – an all-sky survey around the Galactic Plane and focused observations on objects of interest to obtain their broad band spectra and multi-wavelength time variations. The sky survey is intended to discover new X-ray sources including transient objects that are of particular interest for further scrutiny.

One unique aspect of the HXMT mission is the ability to rapidly target transient sources through the use of a quick-look software that sifts through all raw data from the sky scan on a daily basis to identify the position and flux of transient sources such as Gamma-Ray Bursts. Focused observations of targets of interest can be implemented within 24 hours of their first detection.

A number of targets will be studied by HXMT including Active Galactic Nuclei (AGNs, supermassive black holes) to help understand the nature of the cosmic X-ray background. The instrument’s high time resolution will be able to provide a new look at rapid phenomena like the quasi-periodic oscillation and other time-constrained phenomena of black holes and neutron star X-ray binaries.

Riding into orbit alongside HXMT were the Argentinean ÑuSat-3 and two Zhuhai satellites for Chinese operator Orbita.


ÑuSat-3, nicknamed Milanesat, is the third satellite in the Aleph-1 Earth Observation Satellite Constellation operated by Satellogic to collect multi-band imagery of Earth for the commercial market. 43 x 45 x 75 centimeters in size with a mass of 37 Kilograms, ÑuSat-3 hosts a powerful imaging payload capable of collecting panchromatic and full-color images of Earth at a one-meter ground resolution across a 5-Kilometer swath. Hyperspectral imaging is possible at 30-meter spatial and 5-nanometer spectral resolution and the satellite has a thermal infrared system for ground temperature measurements.

Satellogic is using the three-satellite constellation to validate the space and ground segment needed for a rapid turnaround of data for operational services. The company plans to launch up to 25 satellites that would enable a global revisit time of 1.2 hours with future proposals calling for 100- or even 300-strong constellations to further cut revisit times to only a few minutes.

Thursday’s launch occurred at 11:00 a.m. local time at the Jiuquan Satellite Launch Center, utilizing the 603 pad at Launch Complex 43. Launch success was confirmed by Chinese state media within 25 minutes of liftoff after Long March 4B dropped the space telescope off in orbit. Tracking data shows Long March 4B reached an orbit of 536 x 546-Kilometers, inclined 43.0 degrees; HXMT is expected to operate from a 543-Kilometer orbit, designed to keep the overall radiation exposure caused by Earth’s radiation belts and the South Atlantic Anomaly at a minimum.

Thursday’s mission utilized China’s Long March 4B rocket, standing 45.8 meters tall and measuring 3.35 meters in diameter. It has a launch mass of 249,200 Kilograms. The Long March 4B is based on the CZ-4 Family of launch vehicles and was developed by the Shanghai Academy of Space Flight Technology. Development of the Launcher began in 1989 and the CZ-4B completed its maiden flight on May 10, 1999 with the Fengyun 1C Weather Satellite.