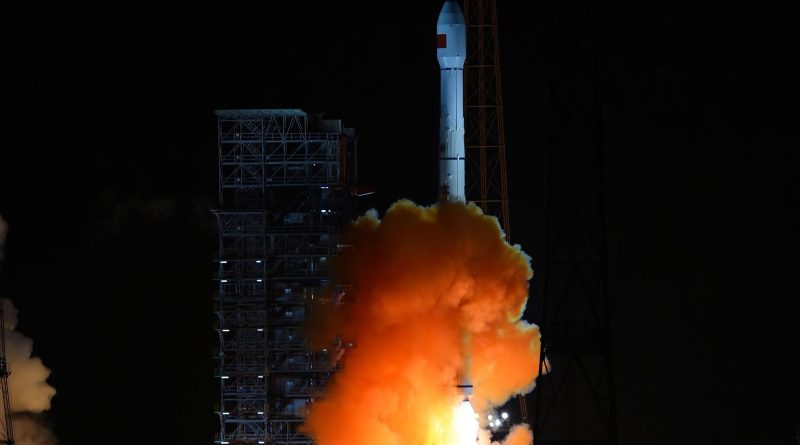 China launched its fourth Tianlian-1 tracking and data relay satellite on Tuesday atop a Long March 3C rocket blasting off from the Xichang Satellite Launch Center at 15:24 UTC on a half-hour climb to a highly elliptical transfer orbit.

China’s Tianlian System, in its design and functionality, is very similar to the American Tracking and Data Relay Satellite System, comprised of satellites in Geostationary Orbit that are tasked with locking onto the uplink of lower-orbiting satellites and relaying different types of communication to ground stations and vice versa with telecommands sent from the ground to the relay satellite and then to the target spacecraft.

Tianlian, like the American TDRSS and Russian Luch, enables real-time communications between orbiting spacecraft and the ground which is crucial for human spaceflight operations as well as satellite missions, e.g. obtaining reconnaissance images or weather data within minutes of acquisition.

Tianlian’s role in human spaceflight operations was recently highlighted by China’s Shenzhou-11 mission that set a new record for the country’s longest crewed space mission with Astronauts Jing Haipeng and Chen Dong staying a full month on the Tiangong-2 space laboratory plus three days of transit time aboard the Shenzhou spacecraft. During this time, the Tianlian satellites provided continuous streams of video, data channels and voice loops to enable ground teams to stay in touch with the crew and monitor their activities while also providing in-flight entertainment to the astronauts via different video and music options.

DFH-3 is hexahedral in shape, 2.2 x 1.7 x 2.0 meters in dimensions when stowed, weighing in at around two metric tons at launch. The bus includes six principal subsystems to provide a stable platform for the payload with the bus in charge of power generation & distribution, propulsion, attitude determination and control, thermal control and data handling. The three-axis stabilized platform has a nominal end-of-life power supply of 1,700 Watts and a life expectancy of at least eight years.

The addition of Tianlian-1 (4) makes the satellite constellation more robust, increasing the overall capacity and also ensuring global coverage can be maintained in case one of the older satellites encounters a failure. Tianlian-1 (1), although still working well, has already surpassed its nominal service life and – as shown in past projects – China always aims to send replacement satellites into orbit once a craft is at the end of its projected lifespan.

Lifting off from Xichang at 23:24 local time, the 56.3-meter tall Long March 3C Rocket, weighing 368 metric tons, began heading south-east after a short vertical ascent. Under the power of its core stage and two liquid-fueled boosters, the vehicle began racing downrange for a trip over China before heading out over the Pacific Ocean, starting with a total thrust of 458 metric-ton-force.

The twin boosters, each 16.09 meters long and 2.25 meters in diameter holding 41,100 Kilograms of storable propellants, were to burn for two minutes and 20 seconds to deliver 740 Kilonewtons of thrust for the initial flight portion.

The vehicle was to continue powered flight on the four-chamber DaFY-6-2 engine of the core stage delivering 2,961 Kilonewtons of thrust. Over a burn of 158 seconds, the 24.76-meter long first stage was to burn through 186,200 Kilograms of hypergolic propellants.

Assuming control of powered flight, the cryogenic third stage, consuming LOX and LH2 propellants, was expected to ignite the YF-75 dual-engine cluster to deliver 16,000 Kilogram-force of thrust to boost the stack into a Low Earth Parking Orbit.

Generating 157 Kilonewtons of thrust, the third stage was to ignite again and burn through a total of 18,200 Kilograms of cryogenic propellants, raising the apogee of the orbit and achieve a Geostationary Transfer Orbit for spacecraft separation just over 26 minutes into the flight.

Previous Tianlian launches targeted an insertion orbit of 200 by 42,500 Kilometers, inclined 18 degrees; orbital data for Tianlian-1 (4) should be available by Wednesday.