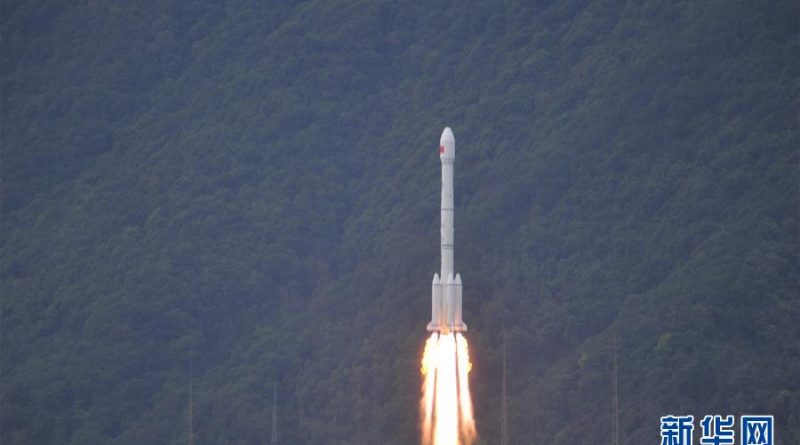 China’s Long March 3B rocket blasted off from the Xichang Satellite Launch Center on Wednesday, lifting into orbit the country’s first high-throughput communications satellite that is set for an experimental mission to test out electric propulsion and laser communications.

Lifting off from China’s Sichuan province at 11:04 UTC, 7:04 p.m. local time, Long March 3B was to turn to the south east to fly over the Chinese mainland before heading out over the Pacific Ocean for the standard half-hour ascent profile into a highly elliptical Geostationary Transfer Orbit. Official confirmation of launch success came forward through Chinese media around one hour after liftoff.

The 4,600-Kilogram satellite Long March 3B was carrying is known as Shijian-13 or ChinaSat-16 developed by the China Academy of Space Technology (CAST) and operated in a cooperation between CAST and communications provider ChinaSatcom. Shijian-13 was the original name of the satellite, flying under China’s space technology test program, while the ChinaSat-16 designation places it under the country’s state-controlled satellite communications program.


Shijian-13 carries the first high-throughput satellite (HTS) payload developed by China and it will test a new electric propulsion system for orbit-raising and stationkeeping in Geostationary Orbit.

The satellite hosts a broadband communications system operating in the Ka-Band frequency range and capable of a data throughput of 20gbps, making it the most powerful communications satellite sent into orbit by the Chinese. Shijian-13’s Ka-Band payload will provide 26 user beams covering the Chinese mainland and offshore areas, also delivering connectivity to airborne and maritime users as well as supporting emergency communications.


Shijian-13 will take up station at 110.5 degrees East from where it can cover the entire Chinese territory as well as the Asia-Pacific Region.

In addition to its HTS payload, Shijian-13 is hosting a new electric propulsion system centered around the LIPS-200 ion engine developed by the Lanzhou Institute of Physics and first flight-tested on the Shijian-9A satellite in 2012.

Electric propulsion systems have the major benefit of increasing the payload mass a satellite is carrying or decreasing launch costs through reduction of spacecraft mass.

The LIPS-200 ion thruster delivers a nominal thrust of 40 millinewtons at a specific impulse of 3136 seconds, requiring 1,200 Watts of electrical power during operation. Ground testing validated the design parameters of the engine over a 7500-hour operation period, but flight testing over several years in the operational space environment is necessary before declaring the system fully operational.

On the Shijian-13 mission, LIPS-200 will be primarily used for stationkeeping in Geostationary Orbit. Stationkeeping is necessary due to perturbations in the satellite’s orbit caused by gravitational influences from Earth as well as solar pressure which, in combination, cause a GEO satellite to drift in the East-West direction and induce a North-South motion that would eventually place the satellite into an inclined orbit. East-West stationkeeping only requires 1.3m/s of delta-v per year and is almost negligible in propellant consumption when using conventional thrusters, however, North-South stationkeeping (NSSK) requires around 50m/s per year.

No information is available on the laser communications terminal reportedly carried by Shijian-13. China made a number of developments in this area in recent years, specifically the inauguration of ultra-secure quantum communications that are completed via optical laser terminals. Extending this technology from Low Earth Orbit to Geostationary Orbit would mark a major accomplishment in the country’s continuing drive in the area of quantum computing and communications.

Shijian-13 is based on the upgraded DFH-3B satellite platform with a bus size of 2.2 by 2.0 by 3.1 meters, capable of hosting payloads in the 500kg range. The bus includes six principal subsystems to provide a stable platform for the payload with the bus in charge of power generation & distribution, propulsion, attitude determination and control, thermal control and data handling. The three-axis stabilized platform has a nominal end-of-life power supply of 1,700 Watts and a life expectancy of at least 15 years.

Tasked with launching the Shijian-13 satellite was the Long March 3B/G2 (Y43) launch vehicle, weighing in at 456,000 Kilograms and standing 56.33 meters tall with a core diameter of 3.35 meters. The rocket comprises four boosters and a three-stage stack with the lower stages consuming hypergolic propellants, Unsymmetrical Dimethylhydrazine and Nitrogen Tetroxide while the third stage uses cryogenic propellants, Liquid Hydrogen and Liquid Oxygen.

Long March 3 thundered off at 11:04 UTC with a thrust of 604 metric ton-force, rising into the skies over the Xichang launch base in the Sichuan province in south-western China. After a vertical ascent of a few seconds, the rocket began to pitch and roll onto its planned ascent path, taking it south-east across China before passing over the Pacific Ocean.

While the second stage was firing, Long March 3B departed the dense atmosphere, making it safe to jettison the protective payload fairing and expose the Shijian-13 satellite for the rest of its ride uphill.

This second burn lasted for approximately three minutes and 15 seconds and was followed by a variable velocity adjustment that involved the vernier engines of the third stage which continued to fire until the navigation platform sensed that the targeted injection velocity was achieved, thus optimizing the accuracy of the orbital insertion with spacecraft separation occurring approximately 26 minutes after launch.