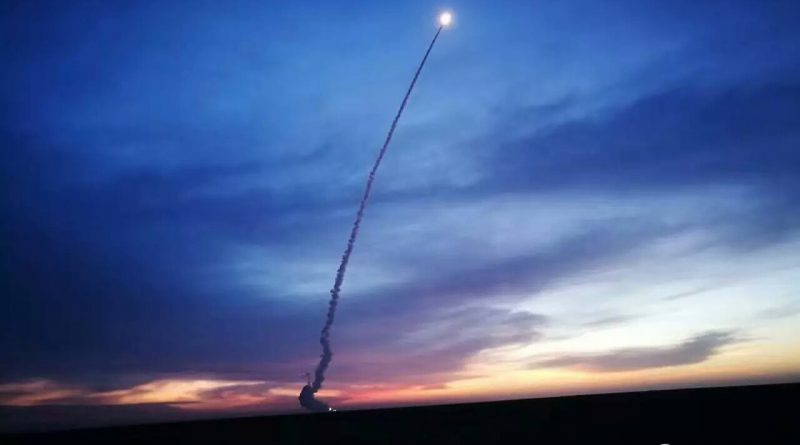 China’s Long March 11 rocket performed its second launch on Thursday morning from the Jiuquan Satellite Launch Center to lift a group of small satellites into orbit in support of a demonstration of pulsar navigation and Earth Observation.

The all solid-fueled Long March 11 rocket blasted off from a mobile launch platform at 7:42 a.m. Beijing time Thursday, 23:42 UTC on Wednesday, aiming for a Sun Synchronous Orbit for the delivery of the XPNAV-1 Pulsar Navigation Satellite, the Xiaoxiang-1 CubeSat for a demonstration of a stabilization system for small space telescopes, and three other CubeSats and attached payloads.

Long March 11 – China’s quick-response, light lifter – made its first flight on September 25, 2015 when it successfully launched the Pujian-1 and three Tianwang satellites into orbit. Developed by the China Academy of Launch Vehicle Technology (CALT), Long March 11 represents a quick-reaction launch vehicle that can be kept in storage for an extended period of time and readied for liftoff on short notice, even in a matter of hours.


Long March 11 is a four-stage launch vehicle standing 20.8 meters tall, 2.0 meters in diameter and weighing in at approximately 60 metric tons. The vehicle has a liftoff thrust of 120 metric ton-force and is optimized for Low Earth Orbit Missions which typically involve the vehicle firing its first three stages in close succession ahead of a coast phase to allow the fourth stage to inject satellites into circular orbits.

XPNAV-1 is the world’s first dedicated Pulsar Navigation Test Satellite, aiming to prove technologies that are needed to take navigation and timing to a stellar level. Pulsar Navigation makes use of the ultra-regular X-ray emissions from pulsars for spacecraft navigation which provides great promise for future deep space navigation.

The X-Ray emissions from pulsars are created by the rapid rotation of neutron stars and are of very high stability over extended periods of time, thus pulsars can be considered ‘celestial lighthouses.’ In terms of stability, pulsars can surpass even the most accurate atomic clocks by a factor of 10,000; the signals can have periods of a few milliseconds to a few seconds.

The regular pulse of X-ray photons coming from neutron stars can be used for spacecraft triangulation in deep space, however, the technical aspect of designing a miniaturized device that can detect these pulses has been a challenge in the past.

The realization of operational pulsar navigation would represent a major milestone in deep space navigation. Current missions rely on tracking stations on Earth that measure the craft’s distance to Earth through radio ranging – measuring the light travel time to the spacecraft for a precise determination of its position in space.

Testing out pulsar navigation is only possible in space because the X-ray signals are absorbed by Earth’s atmosphere.

If successful, this and future demonstration missions will pave the way to more precise navigation in deep space that is of importance for robotic missions venturing out further than ever before as well as crewed missions within the solar system – enabling autonomous navigation without relying on the lengthy process of ground-based ranging.

XPNAV-1, developed by the China Academy of Space Technology, weighs in at 240 Kilograms and hosts two different detector systems – a collimated microchannel plate array and a focused detector. The array detector will be suitable to measure the X-ray background while the focused detector system will be tasked with the characterization of X-ray pulsars. With a 17-centimeter aperture, the telescope employs grazing incidence optics because the conventional telescopes employing lenses or mirrors are of no use for X-rays.

XPNAV-1 will characterize 26 nearby pulsars for their pulse frequency and intensity to create a navigation database that could be used by future operational missions. The satellite is expected to operate for five to ten years.

XPNAV-1 is the first pulsar navigation mission launched into orbit.

NASA plans to send the SEXTANT payload – Station Explorer for X-Ray Timing and Navigation Technology – to the International Space Station in 2017, hosting 56 X-ray detectors to examine whether pulsar-based navigation is technically feasible.

Riding as auxiliary payloads on this launch were four CubeSats.

The 7.5-Kilogram Xiaoxiang-1 is a 6U CubeSat measuring 30 by 20 by 10 centimeters in size. It was manufactured by the Changsha Gaoxinqu Tianyi Research Institute to test a small satellite stabilization system suitable for a small orbiting astronomical telescopes. Lishui-1, using the 2 or 3U CubeSat form factor, aims to establish a constellation of small Earth-imaging craft collecting remote sensing data for the commercial market.

CAS-2T is a student-built amateur radio satellite that uses the 2U CubeSat form factor but operates as an attached payload, not separating from the CZ-11 upper stage. The satellite carries VHF and UHF transponders for use by the HAM radio community. Another attached payload flown on this mission used a sensor suite comprised of cameras, optical communication system and other sensors to measure different parameters during the flight to orbit. It is also reported that the launch carried the Pina-2 CubeSat operated by Aerospace DFH.

Orbital Data shows the Long March 11 launch left six objects in orbit – four are located in a 490 by 510-Kilometer orbit inclined 97.4 degrees while the other two entered an elliptical orbit of 500 by 1,030 Kilometers at an inclination of 98.8°.