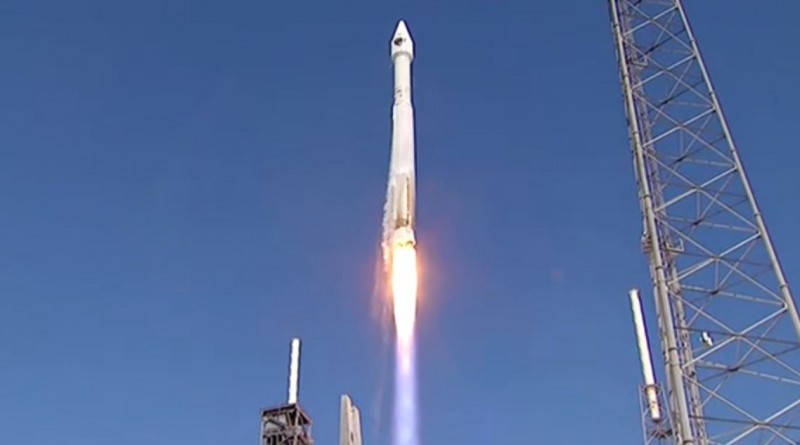 A United Launch Alliance Atlas V rocket lifted off from Florida’s Space Coast on Saturday, embarking on a long mission to deliver the GPS IIF-11 satellite to Medium Earth Orbit in support of the continued modernization of the Global Positioning System satellite fleet. Blasting off from SLC-41 at 16:13 UTC, Atlas V fired its first stage for a little over four minutes followed by a burn of nearly 13 minutes conducted by the Centaur upper stage to put the craft into a parking orbit for a three-hour coast ahead of the critical circularization maneuver aiming for an orbit over 20,000 Kilometers in altitude. Spacecraft separation is expected at 19:36 UTC to mark mission success for the 59th Atlas V flight.

Setting up for the third Atlas V launch of the month, teams pressed into countdown operations seven hours prior to the opening of the day’s 19-minute launch window. The first several hours of the countdown were dedicated to the activation of the 58.3-meter tall Atlas V that completed detailed checkouts while teams at the launch pad closed out all systems for liftoff. Resuming from a planned hold at T-2 hours, the countdown headed into its critical phase, starting with the tanking sequence during which the two stages of the rocket were filled with Liquid Oxygen and Liquid Hydrogen – Rocket Propellant 1 had been loaded into the large first stage prior to the countdown.

Propellant Loading was by the book and Atlas V underwent a final set of checks and reconfigurations before the countdown came to a halt at T-4 minutes to allow teams time for final setup tasks and the required Go/No Go polls. All Stations provided a GO for liftoff including the Eastern Range and Launch Weather Officer as weather was not an issue all throughout the countdown with fairly clear skies. Heading into T-4 minutes, the Atlas V began the last set of critical steps to transition to its autonomous launch configuration.

Three seconds prior to launch, the massive RD-180 engine came to life, soaring up to a liftoff thrust of 390 metric-ton-force. When clocks hit zero at 16:13:00 UTC, Atlas V was released and started climbing. Reaching its proper heading, the rocket departed the Space Coast to the north-east for a flight across the Atlantic Ocean, heading to an orbit inclined 55 degrees. The first stage showed an excellent performance throughout its burn of four minutes and four seconds that was followed by a clean staging sequence and the ignition of the RL-10C engine of the Centaur upper stage, reaching a vacuum thrust of 11,200 Kilogram-force.

Centaur fired for a little over 12 and a half minutes, inserting the stack into an elliptical Transfer Orbit with an apogee at the orbital altitude of the GPS constellation. Next, the stack was set for a coast phase of exactly three hours to climb all the way to the apogee of the orbit so that the second Centaur burn could act as a circularization maneuver. This coast phase will take the stack across the Atlantic, over the UK, a large portion of Central and Eastern Europe, the Black Sea, the Arabian Peninsula and out over the Indian Ocean to head to a position to the south of Australia for the second burn.

Re-start of the RL-10C engine of Centaur is targeted for T+3 hours and 17 minutes and the burn is expected to last one minute and 27 seconds, aiming for a circular orbit 20,459 Kilometers in altitude at an inclination of 55 degrees. Spacecraft separation into Plane E of the GPS constellation of expected to occur at 19:36 UTC on Saturday.