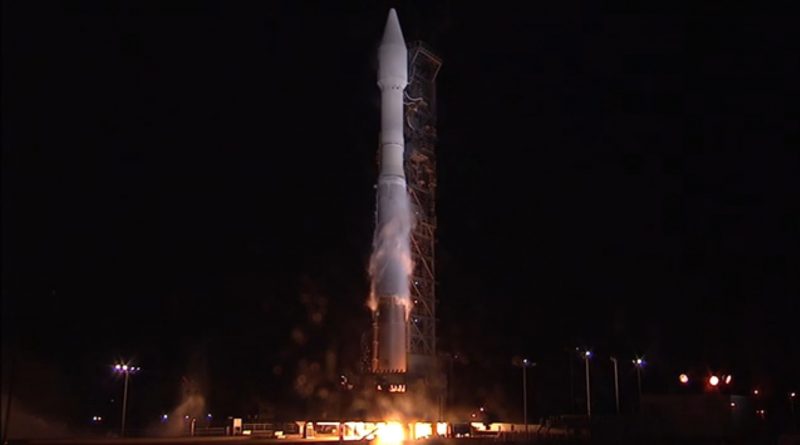 A United Launch Alliance Atlas V rocker blazed into the pre-dawn skies over the Californian coast line on Thursday, lifting off from SLC-3E at Vandenberg Air Force Base at 12:49 UTC to begin a classified mission for the United States National Reconnaissance Office. Known under its codename NROL-55, the mission involves two Naval Ocean Monitoring Satellites that are headed to an orbit over 1,000 Kilometers in altitude to locate and track foreign ships through their radio transmissions. The Atlas V also hosts 13 small CubeSats to be released after completion of the primary mission.

As common with all National Reconnaissance Office missions, Atlas V flew into a news blackout when its payload fairing separated around four and a half minutes into the multi-hour mission. Up to that point, the flight was proceeding by the book – Atlas V operated flawlessly throughout the operation of its RD-180-powered first stage and the RL-10C engine of the Centaur engine ignited on the first of multiple burns planned for this mission. Confirmation of launch success was provided later on Thursday, but no information on the identity and orbit of the payloads will be released due to the secretive nature of NRO’s operations.


The National Reconnaissance Office is the government agency operating the intelligence-gathering satellites of the United States, known to be among the most advanced spacecraft of our time, carrying all types of sensors to collect information for use by intelligence services and the military. NRO satellites are known to carry high resolution optical imagers, radar payloads, electronic intelligence devices, space awareness sensors, and other specialized payloads to track foreign activity around the globe.

Given the secretive nature of NRO as an agency, the identities of the satellites being launched under its various programs are classified, but clues such as the launch site, the timing of launch, the launch vehicle configuration and navigational warnings showing the ascent trajectory can be used to determine the identity of the spacecraft – sometimes with near absolute certainty, but in some cases pin-pointing the nature of the satellites can be a difficult task.

The identification of NROL-55 has been rather straightforward as the timing of launch, the use of the Atlas V 401 configuration with extended payload fairing and the location of downrange safety zones was a dead give-away of a NOSS launch, lofting two Naval Ocean Monitoring Satellites to orbit to replace a pair of satellites launched ten years ago. As pointed out by well-respected satellite tracker Ted Molczan, NOSS satellites of the current generation have been replaced at a ten-year cadence and Thursday’s launch time was set up to head into the typical NOSS orbit.

NOSS satellite pairs fly in a precise formation to use the time delay in the arrival of radio transmissions from ships for the calculation of the ship’s position to provide intelligence relevant in the assessment of foreign activity. The satellites begin operation in an orbit of 1,000 by 1,200 Kilometers, inclined 63.4 degrees.

Also riding aboard the Atlas V were 13 CubeSats flying under NRO and NASA launch initiatives that give an opportunity to satellite operators to fly their payloads at affordable cost. Of the 13 satellites, nine were launched under NRO’s GRACE program while the remaining four were NASA ELaNa satellites launched under an educational program. The 13 satellites are comprised of technical demonstration missions looking at propulsion, attitude control, communications and relative navigation, student-built satellites, and scientific missions.

The lengthy overnight countdown operation was initiated at SLC-3E of Vandenberg Air Force Base eight hours prior to the opening of the day’s classified launch window. When the launch team reported to console at 11 p.m. local time, teams were already busy at the launch pad, closing out the Atlas V rocket and buttoning up the Mobile Service Tower for its retraction. The first step of the countdown, after mandatory comm checks with all support stations across the country, was the activation of the Atlas V rocket – marking the start of several hours of testing to verify the flight control, communications, flight termination and propulsion systems.

Range controllers reported for duty to monitor clearance of the western range, weather balloons started to be released and the Atlas V purge system was set up as countdown clocks continued to tick down. The Mobile Service Tower retracted from the 58-meter tall Atlas V rocket just inside L-5 hours, reaching its safe liftoff position a short time later – enabling teams to complete the final close outs of the facility and Atlas V to repeat RF link checks without the tower obscuring the rocket.

All initial countdown events went by the book and the launch team approved Atlas V for propellant loading when resuming the countdown after a 30-minute built-in hold at T-2 hours. Tanking started right away with the setup of ground systems handling the supercold cryogenic propellants. Over the course of a 90-minute propellant loading sequence, the Centaur Upper Stage received 15,700 liters of -183°C Liquid Oxygen and 48,100 liters of Liquid Hydrogen at -253°C while the Common Core Booster was filled with 185,500 liters of oxidizer. Rocket Propellant 1, around 94,600 liters of highly refined Kerosene, was loaded prior to the countdown.

Flying in its most basic and most flown configuration known as Atlas V 401, the launcher used the Common Core Booster as first stage and the trusted Centaur as upper stage topped by a 4-meter payload fairing. The 401 version does not use any Solid Rocket Motors. Overall, the launcher has a core diameter of 3.81 meters and a launch mass of around 334,500 Kilograms.

Sitting atop the Common Core Booster, Centaur stands 12.68 meters tall and 3.05 meters in diameter with an empty mass of 2,243 Kilograms. In total, Centaur carries 20,830kg of propellants at liftoff inside pressure stabilized stainless steel tanks. The upper stage is equipped with a single 106.3kN RL-10C engine.

Approaching L-1-hour, Atlas V pressurized its hydraulics system and the RD-180 engine on the first stage went through a slew check along with the upper stage’s RL-10 that used its electromechanical thrust vector control system for a steering profile check. Flight Termination System testing in open loop was completed inside L-1 hour and Atlas V received a refined version of its flight software based on the latest measurements of Upper Level Winds. RD-180 began its fuel fill sequence and all propellant tanks reached flight level.

At T-4 minutes, the Countdown stopped for a 30-minute built-in hold to allow teams to complete final polling for launch and catch up with any open items, although none were reported. NROL-55 was transferred to internal power and transitioned to flight mode.

Polling all Stations shortly before picking up the count showed that everything was in readiness for the 58th Atlas V mission – the vehicle was fully fueled and ready for launch, the spacecraft was showing good performance on battery power, the Range was clear and weather was cooperating.

At T-2.7 seconds, the RD-180 engine went through its complex ignition sequence beginning with the injection of a pyrophoric chemical into the gas generator and combustion chamber to get the combustion process going, a sequence taking split-seconds to spin up the turbopump and reach a stable combustion of RP-1 and Oxygen as the engine throttled up to liftoff thrust specified at 390,200 Kilogram-force.

When clocks hit zero at 12:49:30 UTC, Atlas V was released from the pad and started rising at an initial thrust-to-weight ratio of 1.16 – making for a slow initial climb to clear the tower and begin this classified NRO payload delivery mission – the only of the year. RD-180 gimbaled its two nozzles to keep the Atlas V balanced in a vertical position for the first 17 seconds of the flight before the vehicle began its roll and pitch maneuver.

Aligning itself with its south-westerly departure path, Atlas V was set to fly along the California coast line with good visibility in the early morning skies over a number of cities along the coast. Heading down its planned launch corridor, Atlas V switched to active Propellant Utilization after using a fixed mixture ratio for the initial portion of the ascent. With Propellant Utilization active, the mixture delivered to the engine was precisely controlled to ensure an optimized consumption of propellants.

Atlas V broke the sound barrier just after passing the T+1-minute 20-second mark followed by Maximum Dynamic Pressure 89 seconds into the flight. Afterwards, the vehicle switched its Flight Control System to the Zero-Angle of Attack flight mode which controls the attitude of the launcher using a pre-programmed attitude profile that was optimized for the current atmospheric conditions.

Thrust on the RD-180 increased to 422,400 Kilogram-force as the rocket departed the dense layers of the atmosphere.

While the first stage was still burning, Centaur went through preparations for its first burn – firing a pyrotechnic valve to pressurize the Reaction Control System’s hydrazine tanks and completing a short in-flight chilldown of the RL-10C engine to set up for ignition.

Getting to the end of the first stage burn, Atlas V throttled back its RD-180 main engine to limit stress on the vehicle that only weighed a fraction of what it did at liftoff by that point. By throttling back the engine, the rocket maintained an acceleration of 5Gs as the staging sequence drew nearer.

Shutdown of the RD-180 engine was confirmed around four minutes and ten seconds into the flight, meeting the target trajectory after delivering a nominal performance. Staging was accomplished with pyrotechnic charges and eight retrorockets that pushed the first stage away from Centaur to allow the upper stage to get ready for its burn.

Immediately after staging, Centaur purged its reaction control system and pre-started the RL-10 engine on LOX and LH2 followed by igniter spark and a clean ignition of the powerplant, soaring to a thrust of 10,800 Kilogram-force to boost the stack into orbit.

Just a few seconds after Centaur took control of the flight, the protective payload fairing was separated as the stack had departed the dense atmosphere where the delicate satellites could have been harmed by aerodynamic forces. The fairing halves were split open by a pyrotechnic system and rotated outward on hinges before separating from the rocket without making inadvertent contact.

At this point the mission flew into the pre-arranged news blackout of all NRO missions. The only information coming forward from this point on was the confirmation of launch success, announced about 100 minutes after liftoff.

Centaur was initially tasked with two burns – the first to a transfer orbit with an apogee around 1,200 Kilometers followed by a coast phase to allow the stack to climb to the high point of the orbit for a short second burn to bring up the perigee to 1,000 Kilometers and adjust the inclination to 63.4 degrees. Separation of the NOSS satellite duo was to be followed by the standard Contamination and Collision Avoidance Maneuver before Centaur embarks on its secondary mission.

A pair of burns was to decrease the orbit to approximately 460 by 770 Kilometers, inclined 64 degrees (based on the similar NROL-36 mission) for the release of the 13 CubeSats from their Poly Picosatellite Orbital Deployers.

This was the 640th launch of an Atlas vehicle in a program dating back to 1957. It was the 58th Atlas V and the 28th flying in the 401 configuration. NROL-55 was the 7th Atlas V launch of the year with two more to follow – GPS IIF-11 in late October and Cygnus Orb-4 in December.