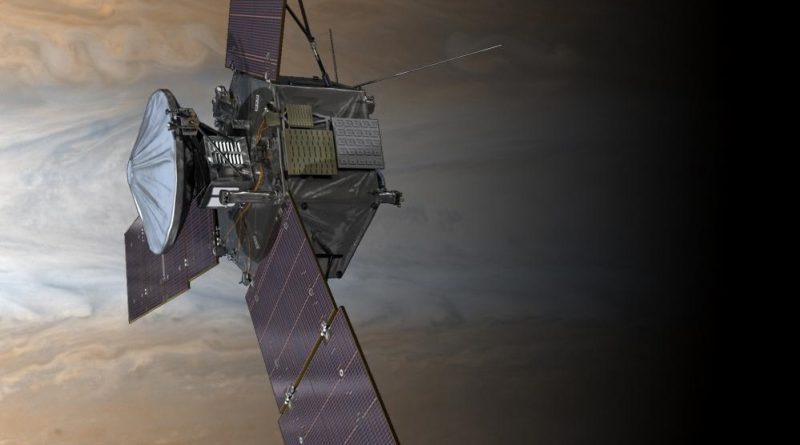 Instead of spiraling down into a two-week science orbit around Jupiter, NASA’s Juno spacecraft will have to remain in a highly elliptical orbit for at least one more lap around the gaseous world due to a suspect signature seen in the preparatory steps for the critical main engine burn originally planned for next week.

After a five-year journey, Juno inserted itself into orbit around Jupiter on July 4 with a 35-minute firing of its rocket engine, achieving a highly elliptical orbit with a period of 53.5-days.

Two of these highly elongated orbits ranging between 4,200 and 8 million Kilometers were planned to provide the time needed to configure the spacecraft for science operations, plus give Juno a chance to rehearse the science sequence performed close to the planet during the mission’s first close orbital brush on August 27.


After operating all its instruments for the ‘perijove’ passage, Juno was outbound again, set for a routine Orbital Trim Maneuver ahead of passing the high point of its orbit on September 23 and starting the inbound leg to what was known as ‘Period Reduction Maneuver’ – a rocket-powered braking maneuver to bring down the apojove distance and place the spacecraft into its two-week science orbit.

The engine firing was planned to begin around 18 UTC on October 19, eleven minutes before Juno passed only 4,180 Kilometers above Jupiter’s cloud tops. This maneuver is the final scheduled use of Juno’s LEROS-1B main engine that was responsible for a pair of Deep Space Maneuvers in 2012 and the Jupiter Orbit Insertion maneuver on July 4.

To set up for the Period Reduction Maneuver, Juno was put through a test sequence on Thursday and was expected to deactivate its instruments on Friday, however, a suspect signature from the spacecraft’s propulsion system prompted the decision to postpone the planned maneuver and keep the instruments running.

“Telemetry indicates that two helium check valves that play an important role in the firing of the spacecraft’s main engine did not operate as expected during a command sequence that was initiated yesterday,” said Rick Nybakken, Juno project manager at NASA JPL. “The valves should have opened in a few seconds, but it took several minutes. We need to better understand this issue before moving forward with a burn of the main engine.”

This is not the first time the mission team postponed a main engine burn out of an abundance of caution. The second of the 2012 Deep Space Maneuvers was delayed by ten days after a higher than expected propellant pressure was seen during the first burn. No issue was observed during the second Deep Space Maneuver and the propulsion system operated normally for July’s orbital insertion.

With a third Capture Orbit added to the mission, Juno is now looking forward to its second close pass by Jupiter that can be utilized for science data collection. Due to the mission’s orbital design, the close perijove passes of the Capture Orbits and the planned Science Orbit are very similar in terms of altitude and flight path – taking Juno from north to south with closest approach near the equator, offering excellent views of Jupiter’s polar regions.

Both orbits offer around six hours for the most critical science observations to be made around the close passage.

The first close pass of Juno already revealed tantalizing new views of Jupiter provided by the spacecraft’s sole camera instrument, JunoCam. Data captured by the other instruments was by no means less spectacular, but scientists needed time to fully dive in and analyze the first close-up data peering below Jupiter’s dense cloud tops.

Passing Jupiter on Wednesday, Juno will be outbound again with its next close pass of the planet on December 11 which will be the next opportunity for the Period Reduction Maneuver – pending evaluations of the suspect check valve signature.

The option of a third Capture Orbit has be prepared as part of numerous contingency scenarios worked out for this mission, however, there is some urgency in getting Juno down into the science orbit due to the limited lifetime of the spacecraft in the extreme radiation environment of Jupiter.

Juno was set for a total of 36 orbits around Jupiter with its science phase lasting until February 6, 2018. Pending reviews of the spacecraft’s performance in the harsh radiation environment, a short mission extension will be assessed when the time comes.