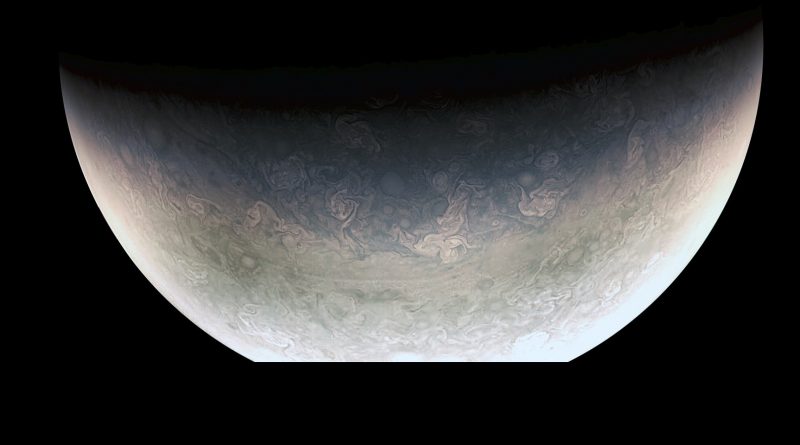 NASA’s released spectacular photos on Friday showing planet Jupiter like never seen before, providing a treasure trove to scientists to learn more about the formation of Gas Planets and offering a look deep into the Solar System’s past.

The images were acquired last weekend when the Juno spacecraft made its first orbital pass over Jupiter’s cloud tops, delivering the first-ever high resolution photos of the Gas Giant’s polar regions and close-ups of the planet’s powerful auroral display.

Juno’s 2.6-billion Kilometer journey through the Solar System that started back in August 2011 reached its destination on July 4 when the spinning spacecraft fired its engine to be captured in a highly elongated orbit around Jupiter – taking 53.5 days for one lap around the planet.

Known as the Capture Orbit Phase, Juno will complete a pair of these highly elliptical orbits before spiraling down into a shorter 14-day science orbit in October. These two longer orbits were inserted into the flight profile to provide the Mission Team with time to prepare for Juno’s busy science mission and allow for one close orbital pass to act as a rehearsal for science operations, most of which occur in the six hours centering the closest approach of the spacecraft.


Last Saturday, Juno passed within 4,200 Kilometers of Jupiter’s cloud tops, approaching the planet on a north-to-south trajectory to first overfly the north pole, reach its closest distance near the equator and then head back out flying over the south pole.

A single JunoCam photo from a distance of over 700,000 Kilometers was released earlier in the week and NASA delivered on its promise of publishing additional photos later in the week.

Downlinking 6 megabytes of data from the close flyby took one and a half days using NASA’s Deep Space Network.

Scientists were eager to get their hands on the data to get their first look at what Jupiter has to offer while also verifying Juno’s instruments were up and running and ready for 20 months of exploration.

“First glimpse of Jupiter’s north pole, and it looks like nothing we have seen or imagined before,” said Juno Principal Investigator Scott Bolton. “It’s bluer in color up there than other parts of the planet, and there are a lot of storms. There is no sign of the latitudinal bands or zone and belts that we are used to — this image is hardly recognizable as Jupiter. We’re seeing signs that the clouds have shadows, possibly indicating that the clouds are at a higher altitude than other features.”

The boundary seen in the image to the right may be the result of a difference in temperature between the atmospheric zone near the pole and toward the equator.

The darker region near the pole is littered with storms of a deformed appearance but still resembling the shape of cyclones seen on Earth. Juno will be able to track the motion of these storms over multiple orbits to gain a better understanding of the dynamics at work in Jupiter’s atmosphere.

Juno orbits Jupiter in a high-inclination orbit, allowing it to fly over the polar regions. All previous Jupiter flybys and the Galileo orbiter have used equatorial trajectories that did not provide any views of the poles.

JIRAM – the Jovian Infrared Auroral Mapper – delivered its first look at the powerful aurora already seen on Jupiter using Earth-based telescopes. A close-up released on Friday provides an unprecedented view of Jupiter’s southern aurora with very bright and structured features in the infrared band. JIRAM also detected puzzling hot spots on the north and south poles that have not been seen in remote studies of the planet.

Juno’s Waves instrument was able to capture the ghostly sounding radio waves that have been known since the 1950s but were never analyzed from close by. These signatures are suspected to be coming from the same energetic particles that create Jupiter’s bright auroras, but Juno will complete a close study to find out where the electrons originate from.

Juno is currently headed back out to a distance of eight million Kilometers as part of its second capture orbit which is dedicated to all preparations for the planned October 19 Period Reduction Maneuver – a critical main engine burn to deliver Juno to its planned science orbit.

The spacecraft will pass the high point of its orbit on September 23 and then head back in, deactivating all instruments to avoid any disturbances during the main engine maneuver that will closely resemble the July 4 Orbit Insertion Maneuver: Juno will point away from the sun and Earth, begin sending status tones, face its engine towards the direction of travel and fire to slow the spacecraft down. Operational science measurements are hoped to start on November 2 when Juno will again pass Jupiter at close distance with all instruments up and running.