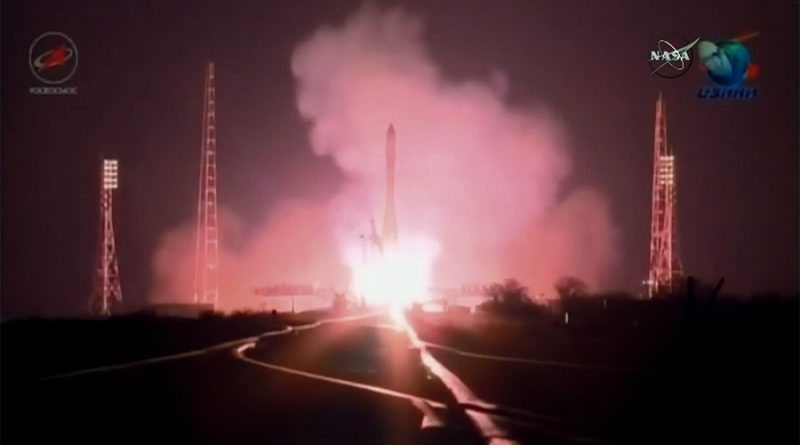 The fate of Russia’s Progress MS-04 cargo spaceship is uncertain after an apparent in-flight anomaly occurred while the spacecraft was riding atop the third stage of its Soyuz U rocket following an on-time blastoff from the Baikonur Cosmodrome in Kazakhstan on Thursday.

Soyuz U, conducting its second-to-last flight before retirement, lifted off from Site 1/5 of the Cosmodrome at 14:51:52 UTC to embark on a nine-minute climb into Low Earth Orbit to send the 7,300-Kilogram Progress ship on a two-day link-up with the International Space Station for the third and final Russian cargo-delivery in 2016.

Firing its four boosters and core stage, the 46-meter tall Soyuz U lit up the night over the Baikonur Cosmodrome as it swung onto a north-easterly departure path to dispatch the spacecraft into the orbital plane of the Space Station. Soyuz punched through a deck of clouds as it headed through Mach 1 and encountered Maximum Dynamic Pressure before dropping its four boosters one minute and 58 seconds into the flight.

The protective launch shroud separated just over two and a half minutes into the flight and the core stage handed powered flight off to the rocket’s Block I third stage four minutes and 47 seconds into the flight. Tasked with a burn of three minutes and 58 seconds, the trusted upper stage also used on the crewed Soyuz FG rocket showed nominal parameters in the early portion of its flight.


But stable contact with the ascending vehicle was lost six minutes and 23 seconds into the flight, Roscosmos confirmed in a statement.

Per the standard ascent profile employed by the Soyuz U rocket, the RD-0110 engine of the third stage was to fire at 30,400 Kilogram-force of thrust until T+8 minutes and 46 seconds followed three seconds later by the separation of the Progress spacecraft – these two milestones were not confirmed in the real-time telemetry read-out from Launch Control.

However, intermittent signals from the Progress Spacecraft were received after the expected separation time and confirmed the spacecraft had deployed its KURS navigation antennas. Deployment of the power-generating solar arrays could not be confirmed through telemetry and radio tracking was employed to determine the trajectory of the Progress spacecraft.

According to NASA TV Commentator Rob Navias, Progress MS-04 reached a “preliminary orbit”, but no precise orbital parameters had been known at the time.

What transpired aboard the Soyuz U launch vehicle at the time contact became intermittent is currently being investigated by Russian specialists. Updates will be posted in our Progress MS-04 Mission Section and our @ISS101 Twitter Handle.

Progress MS-04 was aiming for a 193 by 245-Kilometer orbit, inclined 51.66 degrees from where the spacecraft was to begin it chase of the Space Station with a pair of engine firings later on Thursday and another on Friday to set up for a fully automated rendezvous on Saturday. Docking to the aft end of the Station’s Zvezda Service Module was expected at 16:43 UTC.

Progress MS-04 – the 156th Progress mission – marks the third and last Russian cargo-delivery to ISS planned in 2016, concluding a busy period in Soyuz and Progress flight operations with three missions conducted in a period of just one and a half months to keep ISS at a full staff of six and maintain a full stock of supplies.

The 67th Progress craft launched in support of ISS logistics is loaded with a total of 2,442 Kilograms of cargo comprised of 710 Kilograms of propellant to be transferred to the Space Station’s tanks, 420kg of water for crew consumption & oxygen generation, 52kg of pressurized oxygen to top up the Station’s atmosphere and 1,260 Kilograms of dry cargo loaded into the pressurized section of the ship. Progress primarily delivers cargo for the Russian Segment of ISS, but is also in charge of propellant supply as the only active vehicle capable of re-filling the Space Station’s tanks.

Loaded into the pressurized compartment of the Progress is a mix of maintenance hardware, crew supplies and scientific payloads. The spacecraft carries 398kg of food provisions and sanitary equipment, 379kg of maintenance equipment and replaceable parts, 140kg of hardware for the Mini Research Module, 25kg of crew support equipment, 18kg of science payloads and 87kg of American Cargo that includes food and spare parts for the water recovery system on the U.S. Segment.

Science cargo aboard the Progress includes a plant-growth facility that will be used to grow different crops in the space environment to study differences in plant physiology between crops grown in space and on Earth. To be installed in the MRM-1 module is an experimental Water Recovery System for testing in the microgravity environment for use on future space missions.

While the U.S. Segment of ISS has been recycling water as part of regular operations, the Russians have not yet implemented water recovery in part due to an unwillingness of having crews consume recycled water, however, water recycling will be a necessity for future missions venturing beyond Earth orbit.

The MS-04 mission is also carrying the first of the improved Orlan-MKS space suits that have been in development for nearly a decade. Orlan-MKS has been designed to be more robust than their predecessors while being much easier to use and operate, cutting time from the typical preparations flow for each spacewalk carried out on ISS.