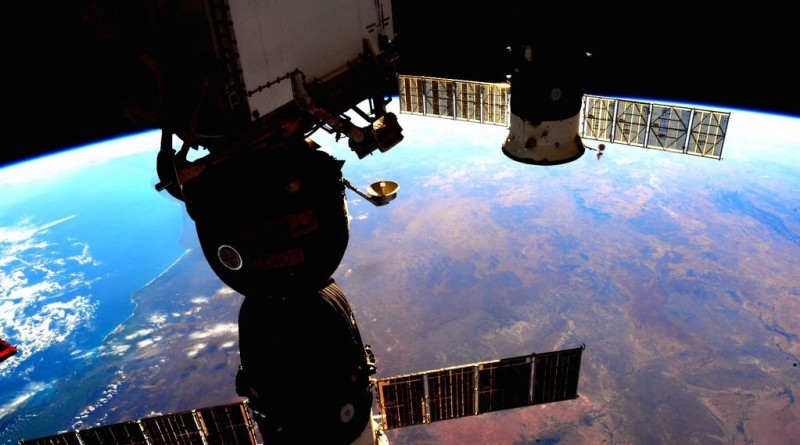 Dynamic Surf experiment reconfiguration [Dynamic Surf is part of a series of experiments examining Marangoni convection that occurs in the presence of surface tension gradients produced by a temperature difference at a liquid/gas interface creating a flow of material.]

Synthetic Muscle Imaging [“Synthetic Muscle: Resistance to Radiation” paves the way for the development of space-based robots with Synthetic Muscle to give them more human-like capabilities to fulfill a number of tasks in future space missions. The electroactive polymers in the Synthetic Muscle would have to be able to withstand the harsh radiation environment in space and maintain its ability to contract and expand like real human muscles.The Synthetic Muscle, developed by Ras Labs, consists of robust electroactive polymers that contract and expand. The material can withstand extreme temperatures from –271 to over 135°C making them ideally suited for application in the harsh thermal environments found in space. Initial testing also shows promising signs of the material’s behavior in extreme radiation when combined with coating and additives.]

VEG-01 Investigation – Plant Photos. [VEGGIE or Veg-01 is a deployable plant growth unit to be set up on the Space Station to demonstrate the feasibility of a space garden. The experiment facility provides lighting and nutrient supply and is capable of supporting a variety of plant species that can be cultivated for educational outreach, fresh food and even recreation for crewmembers on long-duration missions. Thermal control is provided from ISS in-cabin systems and the carbon dioxide source is the ambient air aboard ISS.]

SSIKLOPS Installation on Kibo Slide Table for CubeSat Deployment Friday [SSIKLOPS, the Space Station Integrated Kinetic Launcher for Orbital Payload Systems, is the third deployment mechanism for satellites to be released. It can be used to deploy larger satellites of different shapes up to a mass of 110 Kilograms. SSIKLOPS is a flat structure that includes grapple fixtures for the robotic arms of the Space Station and a single grapple fixture for the satellite that is to be deployed. The fixture includes clamps and springs for the deployment of the satellite. Overall, the structure is 127 by 61 by 7.6 centimeters in size.]

Payload Multiplexer/Demultiplexer (MDM) #2 Loss Of Communications due to High Rate Data Link (HRDL) card latch up. MDM #1 was transitioned to prime and communications were restored, also allowing #2 to complete a reboot and enter nominal backup mode.