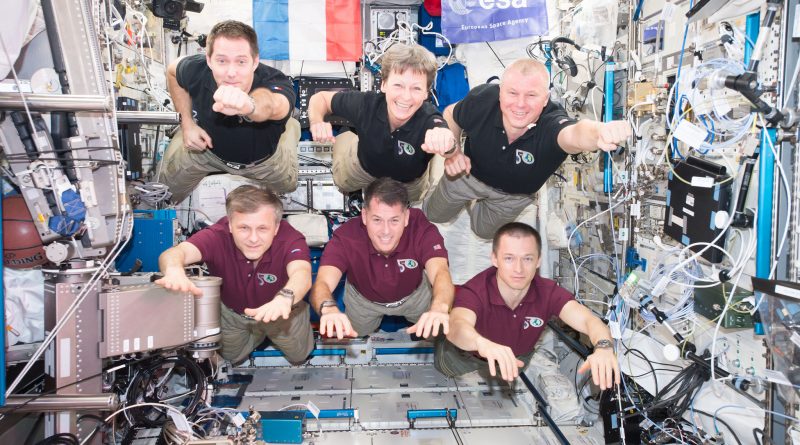 A three-man crew from Russia and the United States is set to return from a 173-day mission aboard the International Space Station on Monday, aiming for a parachute-assisted landing in the Kazakh steppe aboard their Soyuz MS-02 spacecraft.

Soyuz Commander Sergei Ryzhikov and Flight Engineers Andrei Borisenko and NASA’s Shane Kimbrough will climb aboard their spacecraft at 4:40 UTC on Monday to set up for a 7:57 UTC undocking. Soyuz MS-02 will then make another lap and a half around the planet before firing up its braking rocket at 10:28 UTC to begin the crew’s return trip from 400 Kilometers above the planet. Recovery crews will be standing by in a remote location in South-Central Kazakhstan for an expected 11:21 UTC touchdown.


Rookie-Commander Sergei Ryzhikov, veteran Cosmonaut Andrei Borisenko and first-time Soyuz flier Shane Kimbrough blasted off back on October 19, 2016 atop a Soyuz FG rocket and arrived at the Station two days later for a half-year stay as part of ISS Expedition 49 and 50. The 131st Soyuz mission was extended from a March homecoming to reduce a gap in three-crew operations aboard ISS caused by a month-long delay to the next Soyuz mission due to a technical issue on the vehicle originally intended to fly that mission.

Over the course of their mission, the crew supported hundreds of experiments aboard the orbiting laboratory, often serving as experiment subjects themselves to help study the effects of long-term exposure to the space environment on the human body. They oversaw the arrival of the Cygnus OA-5 and HTV-6 cargo vehicles at the end of 2016, a Progress rotation and a Dragon mission in 2017.


The U.S. Segment also saw busy robotics and spacewalking activity, supporting the replacement of a dozen external batteries in January and the relocation of Pressurized Mating Adapter 3 last month with Kimbrough participating in four of the spacewalks.

With their mission winding down, the crew members began packing their Soyuz with return cargo, went through fit checks of their suits and custom-made seat liners, and powered the spacecraft up for a series of tests including a brief firing of its thrusters to ensure all is in order aboard the vehicle. The Station’s robotic arm completed an external survey of the spacecraft in late March to verify Soyuz is in ship shape for its return to Earth. Part of the crew’s return preparation were a series of descent drills in nominal and emergency modes to ensure all will be on the same page during the speedy return to Earth.

Expedition 50 Commander Shane Kimbrough is handing the reigns over to veteran Astronaut Peggy Whitson on Sunday, taking command for Expedition 51. Whitson’s stay on ISS was recently extended from a landing in early June to a September 3 homecoming, allowing the U.S. Segment to operate with an additional pair of hands over a busy summer with hundreds of experiments lined up for that side of the Station. The resident USOS crew will remain at four through early 2018 as NASA takes advantage of vacant seats on upcoming Soyuz missions after Russia decided to reduce its permanent crew to only two members.

After Sunday’s Change of Command Ceremony, the crew will be able to catch some rest and have a last meal as Expedition 50 before the three departing crew members begin the final preparatory steps that entail powering up the Soyuz spacecraft, working through communication checks with mission controllers in Moscow and receiving an updated landing timeline based on the latest tracking information from ISS.

The six Expedition 50 crew members will gather in the Poisk module to say their good-byes as the departing crew members float into their Soyuz spacecraft ahead of closing its hatch to enter a multi-hour process of getting ready for undocking. Once hatches on the Soyuz and Station are closed, the crew will command the vestibule area between Soyuz and ISS to depressurize for the standard hour-long leak check to verify both hatches are holding pressure. While keeping an eye on the pressure gauges, the three crew members will put on their Sokol Launch and Entry Suits before closing out the Orbital Module and moving into their seats inside the small Entry Module – the only part of Soyuz capable of returning to Earth intact.

Sergei Ryzhikov, closing out his first mission to space, will take the commander’s seat in the center, flanked to his left by Andrei Borisenko who is returning from his second long-duration mission to ISS after Expedition 27/28 in 2011, and to the right by Shane Kimbrough who is looking forward to his first return aboard the Soyuz after having flown on the Space Shuttle back in 2008.

When all crew members are strapped in and the Entry Module hatch is closed, pressure checks will be performed on the internal hatch of the Soyuz and the three Sokol suits to make sure they can fulfill their function of protecting the crew in the event of a depressurization. The crew will then work through a last set of systems activations and transition the Soyuz to a configuration for free flight.

Soyuz will switch to autonomous power and power/data interfaces within the docking mechanism will be demated prior to the opening of the hooks on the Poisk module so that Soyuz is only held in place by its own hooks. The Docking Mechanism will be powered up five minutes prior to the expected separation time and the Space Station will transition into a Fine Attitude Hold – deactivating its thrusters to avoid any inadvertent motion during the demating sequence.

Soyuz will command its hooks to drive open 90 seconds prior to physical separation, breaking the structural connection with ISS that had been in place for 171 days. When hooks are open, loaded spring assemblies will push Soyuz and ISS apart with a force of around 300kgf, initiating a slow opening rate of 0.1 meters per second.

Slowly drifting away from the Station’s Poisk module, the crew will make a visual inspection of their former docking port to confirm everything is in order for the arrival of the next crew. Soyuz will re-activate its thrusters three minutes after undocking for an eight-second firing of the DPO thrusters to accelerate the spacecraft along the a R-Bar or radial vector. This will be followed by a relatively speedy roll maneuver that positions the Soyuz for the second departure burn that will last around thirty seconds and occur along the velocity vector to set up the nominal Soyuz departure trajectory.

Rapidly departing the Station’s neighborhood, the crew will get a fleeting look at their former home in space before settling in for one and a half orbits around the planet that allow Soyuz to open a sufficient gap for its braking burn. The crew will not have much to do during most of the free flight before pressing into deorbit prep one hour before the burn, starting with the reconfiguration of the craft’s navigation system and connecting the Entry Module’s emergency batteries to the power bus.

Soyuz will flip into a tail-first orientation and open up a protective cover shielding the SKD main engine while it sits idle for the craft’s stay at ISS. Ignition of the 300 Kilogram-force S5.80 main engine is planned at 10:28 UTC on a burn of 4 minutes and 37 seconds.

Hitting the brakes, Soyuz will slow down by 128 meters per second to transition from an orbital trajectory to a sub-orbital path that intercepts the atmosphere at a precise location to enable Soyuz to land in Kazakhstan. Commander Ryzhikov will keep close watch over the maneuver and read out a running tally of the achieved delta-v (change in velocity) and relevant parameters such as tank pressures and vehicle stabilization.

Upon completion of the critical deorbit burn, the crew will close their helmets and the Orbital Module will open up a valve to vent down to the vacuum of space to set up for the pyrotechnic separation of the three sections of the Soyuz, only one of which is outfitted to withstand the extreme environment of re-entry. Soyuz will be on a north-easterly heading at that point, crossing the Atlantic Ocean ahead of passing over the African continent one final time as the craft rapidly descends in altitude.

Communications with the three crew members, provided through a space-to-space link with ISS, will deteriorate noticeably as the gap between the craft increases and lengthy drop outs once Soyuz is under 200 Kilometers in altitude are a common occurrence.

A series of loud bangs will shake the Soyuz once crossing 140 Kilometers as pyrotechnics fire in close succession to split the spacecraft in three with loaded springs in charge of pushing the Orbital and Service Modules into opposite directions ahead of their destructive re-entry.

Soyuz will hit the atmosphere at 10:58 UTC as it descends through 100 Kilometers over the border of Iran and Iraq, beginning the 23-minute process of slowing down from a blazing speed of 7.6 Kilometers per second to a resting position in the Kazakh steppe. The Entry Module will hold a pre-programmed orientation for the first 89 seconds of entry before active entry guidance kicks in to take the spacecraft through a series of bank maneuvers to bleed off energy while also controlling its downrange travel distance by modifying lift on the capsule.

Barreling through a blaze of plasma, the three crew members will see their windows glowing bright yellow with pieces of the craft’s ablative heat shield passing by. The heat shield protects the spacecraft by slowly burning away and, in the process, creating a boundary layer between the extremely hot layer of crushed air in front of the spacecraft and the vehicle itself.

The crew can expect to pull a peak G load of five when passing 34 Kilometers in altitude, rapidly decelerating toward the planned parachute opening location.

Soyuz slows to a speed of around 210 meters per second for the opening of the parachutes 10.8 Kilometers in altitude. The three-stage deployment sequence begins with the release of a pair of Pilot Chutes that pull out the Drogue Chute – creating one of the most turbulent flight events as Soyuz shakes for around half a minute before stabilizing under the Drogue which slows the craft from 0.7 times the speed of sound to 80 meters per second.

As Soyuz passes 7.5 Kilometers in altitude, the large orange-and-white main chute will unfold to further slow the spacecraft and put it into a vertical descent toward the landing point. The automated landing program – starting around 5.5km in altitude – takes the Soyuz through a final series of steps to get ready for touchdown, dropping the heat shield to expose the landing thrusters and altimeter, re-hooking the spacecraft to a symmetrical arrangement under the chute, jettisoning the blackened window covers and equalizing the cabin pressure.

Soyuz is targeting a remote stretch of the Kazakh steppe for an afternoon touchdown at 5:21 p.m. local time, 11:21 UTC. A fleet of vehicles will be standing by on the ground to rush to the landing site while a series of helicopters will enter a racetrack around the projected landing point to touch down next to the spacecraft within minutes of landing.

Inside the spacecraft, the shock-absorbing seats will move up and the crew will brace for contact with Terra Firma that will be cushioned by solid-fueled landing engines which fire when landing is imminent. Soyuz is expected back on Earth after a mission of 173 days, 3 hours and 16 minutes.