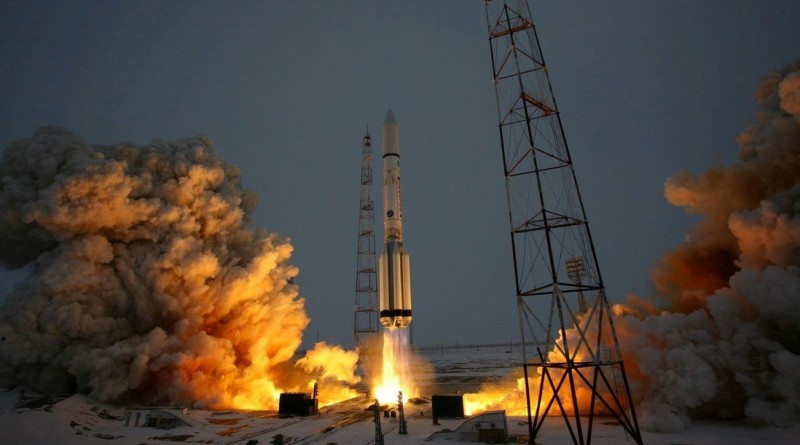 The two multi-launch agreements signed with ILS show the two company’s confidence in the quality program implemented by ILS and Proton’s manufacturer Khrunichev to improve the spotty safety record of the Proton. The Proton had been facing problems closing international launch deals given its recent issues, suffering launch failures at least once a year since the beginning of 2010. As a result, Proton lost a number of commercial launch contracts that were awarded instead to the heavy-lifter’s competition, namely the Ariane 5 operated from French Guiana by Arianespace, SpaceX’s Falcon 9 and upcoming Falcon Heavy rockets as well as the Atlas V rocket operated by United Launch Alliance.


Though as this year’s failure of the Falcon 9 has shown, a market with only two regularly used launchers may not be sufficient for assured access to space for the industry.

Intelsat’s first launch with ILS Proton was the Intelsat 5 spacecraft orbited in 1997 followed over the years by ten more Intelsat missions using Proton rockets launching from the Baikonur Cosmodrome in Kazakhstan. The multi-launch agreement is designed to provide Intelsat with flexibility in their fleet management, allowing them to launch satellites when needed. The five satellites to be launched under the agreement are yet to be designated.

Intelsat has stressed the company’s belief in launch diversity as a necessity for the success of the satellite communications sector. To that end, the company contracted a number of different launch providers for their missions, ranging from the American Atlas V, over the Sea Launch-operated Zenit, the Ariane 5 heavy-lifter and even China’s Long March rocket in an endeavor that was not crowned with success.

Currently, Intelsat satellites are booked for launches on Falcon Heavy, Ariane 5 and Proton rockets. The next satellite up for launch is the Boeing-built Intelsat 29e satellite that will ride an Ariane 5 rocket to orbit on January 27. Intelsat is footing the bill for an entire Ariane 5 rocket to advance the launch of the satellite by several months and forego the wait for a co-passenger riding in the lower payload berth of the rocket.

Satellites in the three-metric-ton weight class have been rather hard to find and as a result, the heavier satellites manifested for Ariane 5 often had to wait for their smaller companions to be ready for launch. Eutelsat also decided in favor of a single-payload launch on Ariane 5 to move up the launch of the Eutelsat 65 West A satellite.

The next Intelsat spacecraft to launch on Proton is the Intelsat 31 / DLA-2 satellite that had been booked for its ride to orbit prior to the signing of the multi-launch agreement. The mission, currently set for April 2016, will use the Phase IV performance enhancement of the Proton rocket to be inaugurated in late 2015.

The stepwise evolution of the Proton launcher was initiated in 2001 when the Proton first flew in a modified version with greater payload capabilities. The Phase I improvements were implemented by 2004 followed by Phase II in 2007 and Phase III in 2009. These different vehicles were flown in parallel until 2013, being chosen based on payload requirements. The improvements that were implemented include the use of modified first stage engines operating at higher chamber pressures, reduced tank wall diameters for weight reduction and mass reduction of interstage structures and avionics systems.

Overall, the Phase IV Proton has a payload capability to a standard 1500m/s Geostationary Transfer Orbit of 6,300 Kilograms which represents an increase of 150 Kilograms over the Phase III version of the launcher. Direct GEO insertion capability is increased by 50 Kilograms.