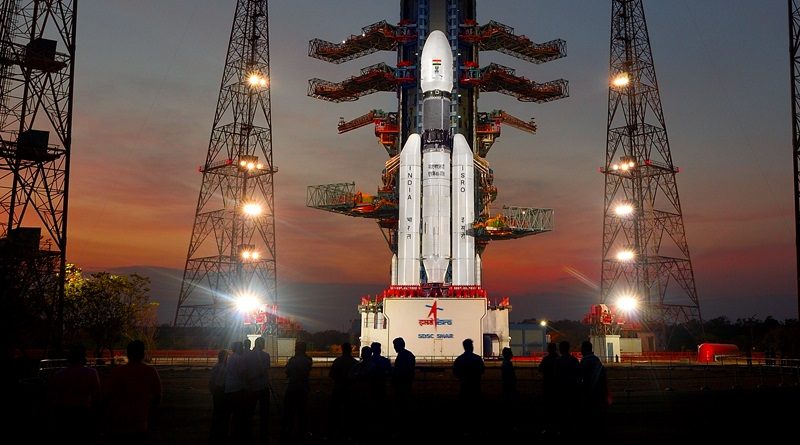 India is counting down to the long-awaited orbital demonstration mission of the GSLV Mk. III rocket, the country’s most ambitious launch vehicle development to date.

Aspiring to become India’s most powerful orbital launch vehicle, GSLV Mk. III will lift off from the Satish Dhawan Space Center at 11:58 UTC on Monday, embarking on a 16-minute climb into orbit with the GSAT-19 communications satellite – the heaviest satellite ever launched from India.

The Geosynchronous Satellite Launch Vehicle Mark III is envisioned to end India’s reliance on foreign launch providers and enable satellites of all weight classes to be launched from Indian soil. Entering development in the early 2000s, the Mark III vehicle had the goal of realizing a payload capacity of ten metric tons into Low Earth Orbit and four metric tons into Geostationary Transfer Orbit to create a vehicle capable of supporting India’s satellite programs as well as crewed launch capability.


GSLV Mk. III aimed at creating a whole new launch system that is fundamentally different from the previous GSLV variants that relied on heritage components from India’s PSLV workhorse to which a new Cryogenic Upper Stage was added. This upper stage turned out to be the most difficult element to be developed for GSLV as initial flights of the Mk. I used a Russian-built upper stage followed by teething issues of India’s own cryogenic stage on the first Mk. II missions.

Difficulty related to the upper stage sent the GSLV Mk. II back to the drawing board for a top-to-bottom review and also delayed the Mk. III project that had aimed for initial test flights by 2010 when development began in 2001.

The boosters and core stage of the Mk. III vehicle enjoyed a relatively smooth development, both reaching the test stand in 2010. At that point, the C25 stage and its 200-Kilonewton engine in particular were still years from completing their development and testing program. In order to get an initial flight of the Mk. III design off the ground, ISRO opted for a sub-orbital test flight only involving the boosters and core in an active role with a mass simulator standing in for the cryogenic stage.


The LVM3.X mission, carrying a prototype version of India’s future crew vehicle, lifted off on December 18, 2014 to demonstrate the lower stages in propulsive flight and the aerodynamic & mass characteristics of the assembled vehicle. The mission reached a top speed of 5.3 Kilometers per second and a peak altitude over 125 Kilometers, enabling the 3,700-Kilogram CARE capsule to test out its control system, heat shield and parachutes, splashing down in the Bay of Bengal after a 19-minute flight.

While LVM3.X was celebrated as a great success, India also managed to return the GSLV Mk. II to the launch pad and achieve a string of successful missions, finally demonstrating that ISRO had managed to achieve reliable performance in a cryogenic rocket stage with the smaller CE-7.5 engine that is considered a little brother to the CE-20.

Development of C25 and its CE-20, India’s most powerful full-cryogenic engine, remained the primary hold-up of the first Mk. III orbital test mission. A flight-worthy C25 eventually reached the test stand at Mahendragiri in early 2017 and was first fired in January and again for a longer, full-duration test in February – clearing GSLV Mk. III to move into launch preparations.

The fully assembled Mk. III rocket rolled out to the Second Launch Pad at Sriharikota in late May to undergo final checkouts and ISRO reported on Sunday that the 25.5-hour countdown operation had started as planned. The first hours of the countdown are dedicated to loading the L110 core stage with 116 metric tons of Hydrazine and Nitrogen Tetroxide before the C25 enters cryogenic tanking to receive 28 metric tons of supercold Liquid Oxygen and Liquid Hydrogen.

C25 will be kept topped up to flight level throughout the countdown as GSLV repeats a series of tests before entering its automated countdown operation to check off final milestones such as transferring to battery power, pressurizing the tanks and taking over control from the ground sequencer when the real time program kicks in one minute before T-0.

Liftoff occurs under the power of the twin S200 solid rocket boosters alone, igniting at the moment of T-0 to catapult the rocket off the ground with a maximum thrust topping out at 1,050-metric ton force. The two boosters will be the sole source of propulsion for the first 114 seconds of the flight – a concept similar to the U.S. Titan III and IV rockets which also launched powered by their side boosters alone before the core stage kicked in later in flight.


GSLV’s S200 boosters each stand 26.2 meters tall and measure 3.2 meters in diameter, burning over 205 metric tons of propellant to generate an average thrust of 3,578 Kilonewtons over a burn of around 140 seconds. The boosters employ flex-seal nozzles that enable them to be gimbaled for controlling the vehicle’s orientation, putting GSLV through a roll and pitch maneuver shortly after liftoff to attain a flight path to the south-east, heading down the standard route toward GTO.

One minute and 54 seconds into the mission, 41 Kilometers in altitude, the L110 core stage will fire up its two Vikas 2 engines on a burn of three minutes and 23 seconds – the initial portion of which overlaps with the two boosters. Upon sensing the declining pressure on the S200s around two minutes and 20 seconds into the mission, GSLV will trigger the pyrotechnic separation of the SRBs, having helped accelerate the stack to a speed of two Kilometers per second.

The core stage, 21.4 meters long and 4.0m in diameter, will switch into Closed Loop Control shortly after the boosters dropped away 62 Kilometers in altitude, processing navigation data to adjust its flight path toward the intended orbital destination. Generating a vacuum thrust of 78 metric-ton-force each, the two Vikas engines will be tasked with increasing the vehicle’s speed to 4.4 Kilometers per second.

Three minutes and 45 seconds after launch, GSLV will be 116 Kilometers in altitude, making it safe to jettison the two payload fairing halves as aerodynamic forces no longer represent a danger to the GSAT-19 satellite. Mk. III features the biggest fairing of India’s launchers with a diameter of five meters, capable of facilitating the largest satellite currently in operation by ISRO.

Shutdown of the L110 five minutes and 17 seconds into the flight will be followed three seconds later by its separation from the C25 upper stage. The moment of truth will come five minutes and 22 seconds after launch with the ignition of the CE-20 engine on a nail-biting burn of ten minutes and 43 seconds to boost GSAT-19 to an injection speed of 10.26 Kilometers per second.

All eyes will be on the C25 as it progresses toward orbit, continuing to fly south east across the Indian Ocean to drop GSAT-19 off in an orbit of 170 by 35,975 Kilometers, inclined 21.5 degrees.

Engineers and launch controllers will breathe a sigh of relief when the 13.55-meter long upper stage shuts down after reaching the target orbit sixteen minutes after lifting off from India’s east coast. Separation of GSAT-19 will occur just 15 seconds after engine cutoff to complete GSLV’s highly-anticipated mission.

The 3,136-Kilogram GSAT-19 satellite has been built for a ten-year service life, outfitted with a high-throughput Ka/Ku-Band payload to support data-intensive telecommunications. Its mission starts out with a series of firings of the Liquid Apogee Motor to maneuver into Geostationary Orbit where its orbital speed matches that of Earth’s rotation, allowing the satellite to maintain the same position relative to its coverage zone.