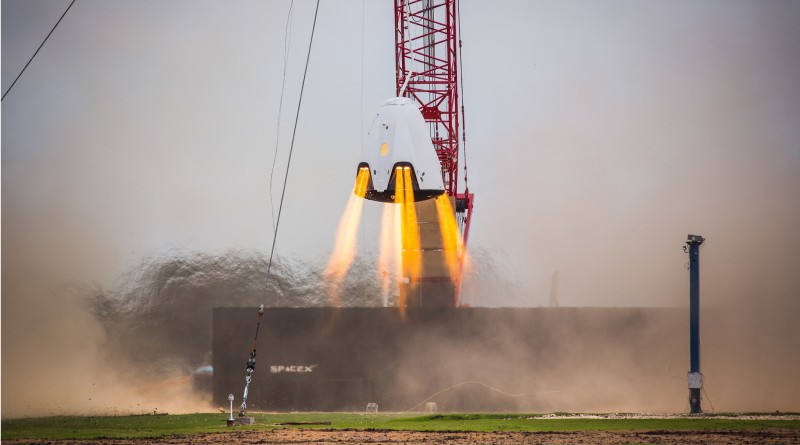 SpaceX has begun propulsive hover testing of the company’s prototype Dragon crew capsule, marking a milestone in the development of the high-precision powered landing technique envisioned to become the end of crewed Dragon missions. Though the initial Dragon flights will use the more conventional parachute-assisted splashdown in the Ocean, SpaceX will aim to introduce powered touchdowns on concrete pads in the craft’s future.

In a video released by SpaceX, a five-second firing of the spacecraft’s SuperDraco rockets is shown, having taken place at the company’s McGregor facility back in November. The prototype vehicle, known as DragonFly, was suspended under a crane when igniting its eight SuperDraco rocket thrusters that were brought up to sufficient thrust to put the vehicle into a hover before returning to its resting place under the tether.


This particular Dragon craft was first seen in action back in May 2015 when completing a Pad Abort Test at Cape Canaveral, simulating an abort prior to liftoff by igniting the SuperDracos and departing the launch pad in a hurry to demonstrate a crew could be moved to safety in the event of a failure before or at ignition of the Falcon 9 rocket. The highly instrumented test vehicle successfully ascended from its pad, completed a pitch-over, separated its trunk section and deployed its parachutes to glide back to a soft splashdown just off-shore.

While the Pad Abort Test required the engines to fire at full throttle, only about a quarter of their maximum power was needed for the hover test. Installed in four engine pods on the base of the Dragon 2 vehicle, the eight SuperDraco engines can deliver an axial thrust of up to 54.4 Kilonewtons (54,400kgf), but can also individually throttle down to a fraction of their maximum thrust enabling the Dragon to carry out complex maneuvers, envisioned to include powered landings and different launch abort scenarios.

This design of combining a landing and abort system has the advantage of not adding mass to the vehicle since the propellant of the system would be used either way – in a launch abort or in a regular landing, avoiding the additional mass of a traditional launch escape system which would use an escape tower that is discarded during ascent.

The qualification of the launch abort system is a short-term goal for SpaceX to get set to begin crewed Dragon missions. A major step in the certification process was last May’s on-pad abort demonstration with another test left to be completed – an in-flight abort demonstration to show the Dragon craft can safely escape a failure of a launch vehicle in the most dynamic flight environments.

Landing under the power of the SuperDracos is a stretch goal to be introduced later in Dragon’s career. The initial flights will descend under parachutes towards a ocean-based splashdown. Qualification work on Dragon’s parachutes is on track for completion later this year.

A propulsive landing of Dragon would use parachutes to slow the spacecraft down before the vehicle would separate and begin firing its engines to correct its course towards a pin-point landing on a flat pad.

After completing the Pad Abort Test, the prototype Dragon spacecraft was refurbished and shipped to the McGregor test site in Texas to start the DragonFly test program outlined to start off with tethered tests before graduating to free flights demonstrating soft propulsive landings. A two-second hot-fire was performed two days ahead of the five-second hover test on November 24.

The video released by SpaceX shows all eight SuperDracos igniting and Dragon lifting, taking the tension out of the tether. Dragon remained in a hover for only a brief period before the engines throttled down slightly so that the vehicle could enter its resting position prior to shutting down the engines. A cloud of unburnt propellant escaped after engine cutoff which is not uncommon for hypergolic rocket engines.

SpaceX and Boeing received contracts from NASA in 2014, valued at up to $6.4 billion to ferry crews to and from the International Space Station to end NASA’s reliance on the Russian Soyuz craft to fly crew members to the orbital laboratory.

A crewed mission of the Dragon 2 spacecraft would begin with a launch from Launch Complex 39A at the Kennedy Space Center, utilizing SpaceX’s Falcon 9 rocket. Linking up with ISS, Dragon could deliver up to seven crew members to ISS but will usually carry a crew of four plus a shipment of cargo. The craft would return to Earth after a mission up to 210 days.

SpaceX is currently in the process of preparing for final parachute tests and work is underway on the first three flight-ready Dragon 2 spacecraft – though still outstanding is the qualification of the ship’s life support systems and SpaceX’s rather fashionable Launch and Entry Suits.

Currently, SpaceX is still aiming for the first uncrewed test flight of the human-rated Dragon craft by the end of 2016 to show a complete flight profile, including an automated docking to ISS, making use of the new visiting vehicle architecture currently being established on the docking ports of the U.S. Segment of the Station.

SpaceX plans to re-use the first flown Dragon 2 spacecraft in early 2017 for the in-flight abort test, readying the ship for a first crewed test flight with two Astronauts in the first half of 2017.