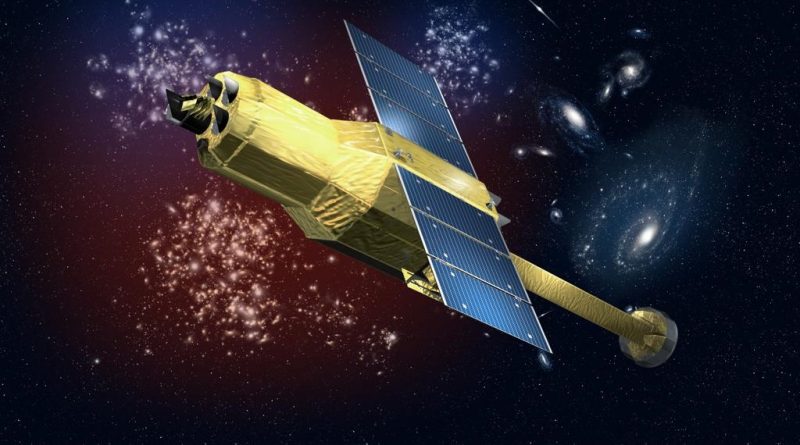 A small glimmer of hope emerged in the ongoing troubles of Japan’s Hitomi mission when the spacecraft briefly sent signals to the ground, confirming that there still is some life in the 2,700-Kilogram space observatory. However, the signals were brief and the Japan Aerospace Exploration Agency is still working to identify the cause of the anomaly and steps to recover the spacecraft from an uncontrolled tumble.

Hitomi, launched on February 17th aboard an H-IIA rocket, was hit by serious trouble on Saturday. The Joint Space Operations Center that tracks objects in orbit reported a debris event involving Hitomi on Sunday with calculations showing that five trackable debris were liberated from the satellite at 1:42 UTC +/-12 minutes on Saturday in conjunction with a five-Kilometer drop in the spacecraft’s orbit – suggesting an energetic event had transpired aboard the vehicle. A few hours later, Hitomi failed to check in during a regularly scheduled communications pass over Japanese tracking stations – the first sign JAXA had of Hitomi’s troubles.


Initial visual observations made on Sunday revealed the spacecraft was tumbling and lost three-axis stabilization, further dampening the prospects of a full recovery of the mission. Satellite trackers made observing Hitomi a priority in the last three days and multiple reports from different locations were posted on the SeeSat-L Mailing List. According to observers, Hitomi is flashing with a period of around 11.5 seconds and intermediate brightenings in between are typical for a satellite in a multi-axis tumble, having lost stabilization on all three axes.

One encouraging sign is that the apparent tumbling rate has not increased from the first observations on Sunday until the most recent reports from early UTC Wednesday – indicating that whatever caused Hitomi to enter a tumble is not a persistent issue like continuous venting from the propulsion system.

JAXA issued an update on Tuesday, reporting that signals from Hitomi were briefly received by the Uchinoura Ground Station in Japan around 13 UTC on Monday and the Santiago Tracking Station in Chile at 17:30 UTC. Radar and telescopes are in use to track the objects liberated from the spacecraft to attempt and determine their size.

Although the reception of signals is encouraging and confirms Hitomi is still alive – at least to some capacity – no data was received from the beacon signals and JAXA is still not making progress in determining what caused the satellite to break up. The big unknown at this point is how long Hitomi can stay alive in the current situation – the spacecraft’s solar panel is not pointed to the sun and Hitomi is likely consuming battery power, if the batteries are still healthy.

Also unknown is whether the vehicle has any propellant left to use its thrusters to reduce body rates if JAXA finds a way to send the appropriate commands to Hitomi. The spacecraft is also outfitted with reaction wheels that could reduce body rates, but require power which is likely running out with every day the satellite spends in a tumble.

The U.S. Air Force reported that no indication of a collision between Hitomi and another object in orbit was seen in data analysis performed after the event became known.

JSpOC collects tracking data for every sizeable object in orbit, the smallest being ten centimeters in size. Going back and completing an assessment of potential conjunctions between Hitomi and other objects, teams could not find any possible match – though a collision with a small object not tracked by ground-based radars can not be ruled out.

The nature of the event is still under investigation, but the change of the craft’s orbit from 564.6 by 580.5 Kilometers to 559.6 by 581.1 Kilometers indicates a change in velocity of around 3 meters per second. Additionally, the high rate of the vehicle’s tumble suggests a more severe event like a leak of cryogenics from the Soft X-Ray Spectrometer instrument’s Helium tank, a potential breach in a propellant or pressurant line, or a thruster malfunction causing torque to spin the satellite up.

Despite a relatively grim outlook, JAXA has not given up hope and continues to listen for signals from the satellite using ground stations in Japan, Australia and Chile to catch whatever data they can to assess the status of the spacecraft. If at all possible, a meaningful recovery of the satellite would take months, JAXA representatives said earlier this week.

Hitomi had been halfway through a three-month commissioning activity to sharpen its view of the X-Ray Universe, simultaneously using four telescopes to deliver images and spectra across the Soft- and Hard X-Ray regime to study the most extreme environments in the universe including black holes and areas of extreme particle acceleration. Hitomi was expected to deliver breakthrough results in a diverse area of science, ranging from the large-scale structure of the universe and its evolution to the behavior of matter in strong gravitational fields, the physical conditions at sites of cosmic-ray acceleration, and the study of dark matter in galaxy clusters.