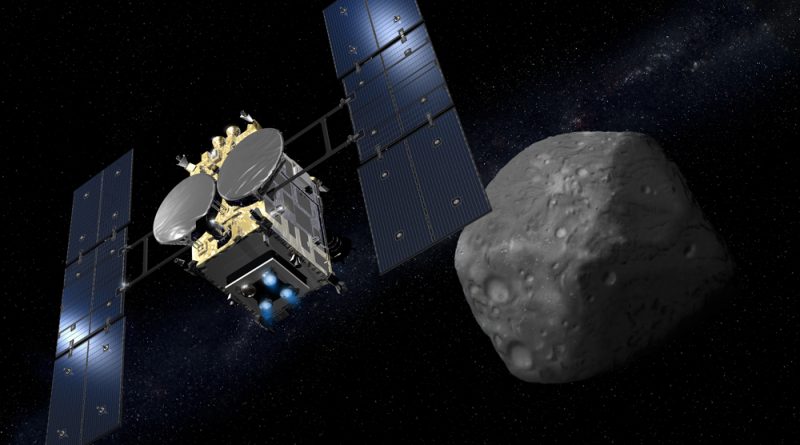 Japan’s Hayabusa 2 spacecraft – on a quest to touch an asteroid – has set its sight on its destination in late February via the first detection of asteroid Ryugu by the craft’s Telescopic Optical Navigation Camera that will be used to guide it into close proximity to the distant world later this year.

The probe still has over a million Kilometers to cover in order to reach its target in June for a one-and-a-half-year exploration mission that will see the spacecraft dispatch a series of landers and an impactor while also making contact with Ryugu itself to scoop up sample material to be returned to Earth in December 2020.

The first optical images of Ryugu, only appearing as a speck of light, were taken by the faraway spacecraft on February 26, Day 1,181 of the Hayabusa 2 mission that started back on December 3, 2014 with a successful launch atop an H-IIA rocket that sent the 590-Kilogram craft on a three-and-a-half-year journey to Ryugu – a 920-meter C-type primitive body that is hoped to hold a treasure trove of scientific information in the form of a preserved record of the early days of the solar system.


Sent off at a top speed of 11.8 Kilometers per second (relative to Earth), Hayabusa 2 entered a heliocentric orbit and completed 547 hours of ion engine firings between March and September 2015 to adjust course for an Earth flyby on December 3rd that saw the spacecraft zip past the planet at an altitude of around 3,090 Kilometers and borrow some of Earth’s angular momentum to speed up in its orbit around the sun to reach asteroid Ryugu. The speedy flyby provided a welcome opportunity for exercising the craft’s instrument suite and collecting calibration data of a very well-known target.

Heading back out, Hayabusa 2 was set for two major orbit-adjustment campaigns using its ion engines to slowly catch up with Ryugu that orbits the sun at 0.96 by 1.42 astronomical units. Some testing of the craft’s critical systems including the long-distance Ka-Band communications link were carried out along the way and the ion engines were operated for 794 hours between March and May 2016 to adjust the craft’s solar orbit by changing its speed by 127 m/s and adding a brief fine-tuning maneuver of 40 cm/s. The second orbit-adjustment campaign between November 2016 and May 2017 operated three of the four engines for 2,558 hours to change the craft’s speed by 435 m/s.


Hayabusa began firing three of its four ion engines again on January 10, 2018 marking the initiation of the far-field approach phase to take the spacecraft toward its destination with ion engine operation planned to last until early June when the final approach phase will be initiated from a distance of 2,500 Kilometers. Until June, the ion engines are expected to operate for 2,700 hours for a total delta-v of around 400 meters per second.

On February 26, Hayabusa pointed its Telescopic Optical Navigation Camera ONC-T toward Ryugu’s location and snapped approximately 300 images, a subset of which were transmitted on the 27th and indeed show the asteroid at an optical magnitude of 9. At the time the images were taken, the spacecraft was still 1.3 million Kilometers from its destination.

The ONC-T images provided independent confirmation that Hayabusa 2 is on the correct approach course toward Ryugu in addition to constant radio tracking of the spacecraft’s trajectory. According to Project Management, the spacecraft remains in excellent health and the current ion propulsion phase will proceed with maximum thrust.

Reaching the approach point in early June, Hayabusa 2 will rely on its three Optical Navigation Cameras to provide relative navigation data used by mission teams on Earth to plan the spacecraft’s final approach, first into a 20-Kilometer surveying orbit where the spacecraft is expected to arrive by July 5th. It will then be set for a step-wise descent first to five and then to one Kilometer from Ryugu’s surface to collect detailed remote-sensing data of the asteroid using a pair of infrared spectrometers tasked with studying the energy balance of the asteroid as well as its chemical composition.


The primary payload of Hayabusa 2 is a sample collection system that will acquire small amounts of surface samples during as many as three brief touchdowns of the main spacecraft on the asteroid’s surface using a high-fidelity navigation system that allows the spacecraft to make contact with the surface just long enough to shoot down a projectile and scoop up lifted dust through a sampling horn.

Another payload of the mission is an impactor device that will be deployed towards the asteroid and use high-explosives to generate a high-speed impact that is hoped to expose material from under the asteroid’s surface for later collection by Hayabusa 2. A deployable camera will be used to document the impact of the penetrator.

The number of touch-and-go attempts and landers to be dispatched not only makes Hayabusa 2 one of the most complex missions currently in operation but also creates a packed schedule for the 18 months it plans to spend in proximity to the asteroid. Per current planning schedules, the initial touchdown and lander deployment is planned for September/October followed by a brief intermission ahead of touchdown #2 in February 2019, the release of the impactor in March/April and the third touchdown one month later. Departure of Ryugu is expected in December 2019 for a one-year return journey expected to culminate with the high-speed re-entry and landing of the hermetically sealed Sample Return Capsule in Australia.