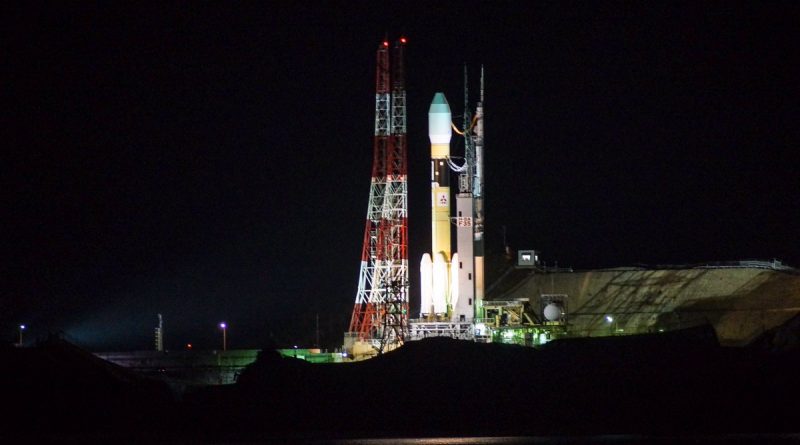 The launch of Japan’s H-IIA rocket with the third Quasi-Zenith Satellite had to be scrubbed deep into the countdown on Saturday due to a potential issue with the launcher’s propulsion system.  >>Full Update

A satellite designed to improve navigation availability and accuracy over Japan is ready for launch on Saturday atop an H-IIA rocket blasting off from the country’s picturesque Tanegashima Space Center. Michibiki-3 is the third satellite to join the Quasi Zenith Satellite System designed to augment the U.S. Global Positioning System and Europe’s Galileo for users in Japan’s urban canyons and improve navigation accuracy throughout the Asia-Pacific Region.

2017 is a big year for the Quasi-Zenith Satellite System (QZSS) with three satellites set to join the initial prototype spacecraft launched in 2010 to establish the fully operational system consisting of three satellites in specialized elliptical orbits with high elevation angles for Japan and a single bird in Geostationary Orbit to provide 24/7 augmentation over a broad region. The deployment of the operational QZS constellation marks the culmination of 15 years of development work and more additions are planned later on to deliver further availability and accuracy enhancements.


Saturday’s launch has an exceptionally long window opening at 4:40 UTC and extending eight and a half hours to send QZS-3 into a Geostationary Transfer Orbit to become the sole GEO satellite of the constellation as a constant navigation beacon over the Asia-Pacific Region. As the heaviest of the QZS satellites, Michibiki-3 rides on an H-IIA 204 rocket that enlists the help of four solid rocket boosters to send the 4,700-Kilogram craft on its way. H-IIA will be in action for 28 minutes and 40 seconds to dispatch QZS-3 into its highly elliptical target orbit via two burns of the rocket’s upper stage.

Development of the Quasi Zenith Satellite System started back in 2002 with the overall objective of increasing the availability of GPS navigation services, particularly in the country’s urban canyons where tall buildings block all GPS satellites that are not at high elevation, potentially causing interruptions in service. To that end, QZSS proposed to establish a three-satellite constellation in a specialized orbit that places one satellite directly over Japan at any given time.


The QZSS satellites are designed to deliver two types of signals – GPS-compatible navigation signals and GPS augmentation messages that can be used by ground receivers to more accurately calculate user position. Through the GPS-compatible messages in the L1, L2 and L5 bands, the QZSS satellite can be treated as an additional member of the GPS constellation at high elevation angle from all locations in Japan, increasing availability of GPS.

H-IIA emerged from its assembly building at the midnight hour for a 30-minute trip to cover 500 meters to Launch Pad 1 at the sea-side launch complex. Once at the pad, the rocket’s Mobile Launch Platform will be hooked up to propellant, power and data interfaces and undergo power-up operations for an initial series of checkouts. H-IIA will press into propellant loading around seven hours and 45 minutes before the opening of the day’s launch window, pumping 120 metric tons of -183°C Liquid Oxygen and -253°C Liquid Hydrogen into the two cryogenic rocket stages.

The four boosters will fire for 108 seconds, in the process burning 66 metric tons of solid propellants and helping H-IIA accelerate to 2.2 Kilometers per second. Burnout will be sensed by the declining pressure in the combustion cambers and separation will be initiated two minutes and six seconds into the flight for the first two boosters and three seconds later for the other two, using the booster thrust struts to ensure a clean separation of the 15.1-meter long SRBs.

The first stage will finish its job six minutes and 38 seconds into the flight, having boosted the vehicle’s speed to 5.9 Kilometers per second. Eight seconds after cutoff, the 37-meter long first stage will drop away to clear the way for ignition of the second stage’s LE-5B engine at X+6:52, soaring to a vacuum thrust of 13,970 Kilogram-force to lift the stack into a lightly elliptical Parking Orbit via a burn of four minutes and 31 seconds.