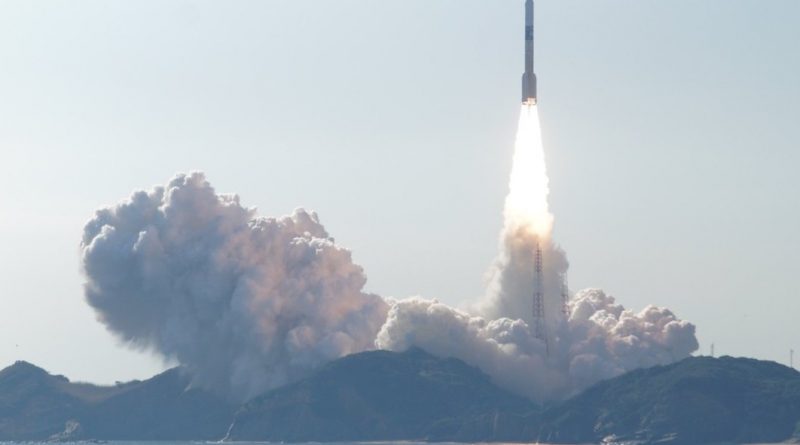 Japan’s H-IIA rocket leapt off its sea-side launch pad on Tanegashima Island at 10:26 a.m. local time, 1:26 UTC on Saturday, soaring into orbit with a high-profile climate observation satellite and a technology demonstration spacecraft set for a mission orbiting the edge of the atmosphere to develop previously unused orbital real estate.

Powering into an 800-Kilometer orbit along a curved trajectory taking the rocket south over the Pacific, H-IIA checked off its sixth success of the year when the two-metric-ton Global Change Observation Satellite sailed off 16 minutes into the flight and the 400-Kilogram Super-Low Altitude Test Satellite deployed after another two firings of the second stage to begin its mission at a lower altitude.

Lifting off at the top of a 22-minute launch window at 1:26:22 UTC, H-IIA marked the opening salvo of what may be a new world record for the shortest interval between two orbital space launches with SpaceX’s Falcon 9 rocket thundering off from the other side of the Pacific just 72 seconds after H-IIA. The previous record, held by a pair of Thor rockets lifting off from opposite coasts of the United States on August 18, 1960 stands at 82±30 seconds but is unfortunately not known to the second since the launch time of one of the launches – which failed to reach orbit – was not published to the second.


Friday night’s quick-fire campaign undoubtedly set the record for the shortest time between two successful orbital space launches that previously stood between five and six minutes, set in 1977 by a Russian Tsiklon-2 rocket launching from Baikonur and a Soyuz-U lifting off from the Plesetsk Cosmodrome.

The orbital paths of Falcon 9 and H-IIA crossed over Antarctica around twenty minutes into the flights, but with plenty of separation in both space and time. The two launches marked the 86th and 87th orbital missions launched in 2017, passing 2016’s record of 85 orbital space launches with several more missions on the international manifest including a Chinese reconnaissance satellite launch just four hours after H-IIA and Falcon 9 took flight.

For Japan, 2017 was a busy spaceflight year – setting a new record for the number of launches by the H-IIA workhorse that improved its previous best of four launches in a calendar year to six successful orbital deliveries.


H-IIA’s 2017 manifest began in January with the launch of the DSN-2 communications satellite for use by the government and armed forces followed in March by the launch of the IGS-Radar 5 reconnaissance satellite operated by the defence forces. The next three missions in June, August and October lifted the three operational satellites of the Quasi-Zenith Satellite System, joining an earlier prototype to complete the initial operational stage of the system to deliver enhanced GPS navigation availability and accuracy to Japan and the broader Asia-Pacific Region.

Saturday’s launch carried a very different pair of satellites, one setting out to study changes undergone by Earth over an extended period of time, the other aiming for a shorter-lived mission orbiting on the edge of the atmosphere, threading a fine line between a fiery demise and continuing to circle the globe to study potential applications for super-low flying satellites.

GCOM-C is the second mission of the GCOM project, joining the GCOM-W1 satellite launched in 2012 and outfitted with an advanced radiometer for tracking Earth’s water and energy cycle.

The goal of the GCOM project – initially conceptualized to operate three generations of satellites over 15 years – is contributing data relevant for long-term climate models. Additionally, their data is employed in a number of operational areas like weather forecasting and disaster management.


GCOM-C, through the use of a similar instrument, will be able to provide insight into the change of global temperatures 27 years after its predecessor mission and the new satellite’s improved spectral sensitivity and image resolution will provide information on the movement of snow and ice on the planet’s surface, identify sources and sinks of greenhouse gases and put anthropogenic climate effects into a new context.

GCOM-C hosts a single instrument known as the Second-Generation Global Imager SGLI, combining a pushbroom imaging sensor sensitive in the ultraviolet, visible and near-infrared range with a whiskbroom scanner feeding a short-wave and thermal infrared sensing system to capture a total of 19 spectral channels with image resolutions between 250 and 1,000 meters and polarization sensitivity to allow for the extraction of aerosol data.

GCOM-C was joined atop the H-IIA by SLATS, the Super-Low Altitude Test Satellite, also called Tsubame – a 400-Kilogram spacecraft riding in the space underneath the primary payload adapter and aiming for deployment into a lower orbit than GCOM. SLATS sets out on an interesting mission demonstrating the feasibility of operating satellites between 200 and 300 Kilometers in altitude for exploitation in Earth observation and atmospheric science.

Orbits at altitudes under 300 Kilometers are rarely used for operational missions given the high-drag environment in the upper reaches of Earth’s gaseous atmosphere that requires satellites to actively combat their orbital decline. 2.5 by 1.2 by 0.9 meters in size, SLATS employs a hybrid propulsion system with chemical Hydrazine thrusters for large orbit corrections and a new Ion Engine System for long thrust phases at low thrust for orbit-keeping right outside the dense atmosphere.

Orbiting closer to Earth will enhance the resolution of imaging instruments while radars or LIDARs would be able to accomplish their measurements at much lower transmit power. In addition to operational benefits, the Super-Low Earth Orbit regime is also of interest to the scientific community as a rarely explored atmospheric region. In fact, the lower thermosphere, extending from 90 to 380 Kilometers, is the least explored layer of the atmosphere even though it plays an important role in energy-exchange processes between the dense gaseous atmosphere and the higher layers where energetic particles roam.

SLATS, upon completing checkouts at a safe altitude, will initially lower its orbit to 250 Kilometers and step down another ten Kilometers on a weekly basis before spending around two months at 220 Kilometers – demonstrating the increase in spatial resolution via an optical imager and exposing a variety of samples to the influx of atomic oxygen at these altitudes to inform designers of future satellites. An extended mission at 180 Kilometers will see the satellite fire its ion thruster at full capacity and the gas jets joining in to keep it in orbit.

Countdown operations for the 37th H-IIA mission began at 11:30 UTC on Friday when the rocket was wheeled from its assembly building to the launch pad to undergo initial power-up and testing operations before the launch zone was cleared and the vehicle headed into propellant loading to receive 120 metric tons of -183°C Liquid Oxygen oxidizer and -253°C Liquid Hydrogen fuel for consumption by the rocket’s LE-7A and LE-5B engines.

Testing continued throughout the countdown and H-IIA was prepared for its automatic countdown sequence heading into the last hour. As the countdown switched to auto-mode at X-4.5 minutes, H-IIA pressurized its propellant tanks, transferred to internal power and switched to onboard control before activating thermal batteries and completing a final thrust vector control check on the boosters to clear the way for ignition.

H-IIA came to life at X-5.2 seconds when the LE-7A engine began its carefully controlled ignition sequence to roar to a thrust of 86 metric-ton-force before the twin boosters were fired up when clocks hit zero – catapulting the 53-meter tall rocket off the ground with a thrust of 596 metric-ton-force.

Getting into Sun Synchronous Orbit from Tanegashima required H-IIA to fly a dogleg trajectory, initially heading to the south east to clear the Philippines and popular fishing areas so that the boosters and payload fairing dropped into clear areas of the Pacific before the rocket’s central stage initiated a right-hand turn onto a south-westerly heading to the desired orbital inclination of 98.68°.

Screaming away from its launch site, H-IIA was burning propellant at a rate of 1,600 Kilograms per second and passed Mach 1 less than one minute after lifting off followed moments later by Maximum Dynamic Pressure. The twin boosters – each burning through 65 metric tons of propellant – fired until the 91-second mark when thrust began to decline after the SRBs helped accelerate H-IIA to a speed of 1.4 Kilometers per second.

Separation of the 15-meter long boosters 108 seconds into the flight was nominal and H-IIA pushed onwards using its LE-7A engine alone, generating 109 metric tons of thrust when flying in the rarefied upper atmosphere.

H-IIA had departed the dense atmosphere when, at four minutes and five seconds into the mission, it separated its protective payload fairing, crossing 167 Kilometers in altitude. The core then gimbaled its engine to begin the powered turn to the south west and continued firing until six minutes and 38 seconds into the mission, boosting the rocket’s speed to 3.7 Kilometers per second and expending 100 metric tons of cryogenics.

The 37-meter long core stage was separated six seconds after MECO and the LE-5B engine on the second stage fired up another nine seconds later, soaring to a thrust of 14,000 Kilogram-force. Via a burn of eight minutes and 11 seconds, the second stage was tasked with a direct ascent into an orbit of 788 by 806 Kilometers – requiring an initial steep climb before the second stage pitched down to accelerate to orbital velocity.

Cutoff on the second stage 15 minutes and 6 seconds into the flight was followed 75 seconds later by the release of the GCOM-C spacecraft, sailing off on its mission to keep watch over a changing planet. For H-IIA, the day was not done at this point, still in for over one and a half hours of operations to demonstrate its new multi-orbit mission capability by sending SLATS off into a lower orbit, closer to where it will spend its operational mission.

The multi-orbit capability of H-IIA builds on upgrades introduced back in 2015 for long-coast Geotransfer missions in the form of additional batteries and thermal protection, advanced propellant management and a new attitude control system. These features can also be applied for multi-orbit missions where the stage remains closer to the planet than on a GTO flight, but maneuvers between two or more distinct orbital regimes.

A brief re-start of just eight seconds occurred 57 minutes into the flight to drop the orbit’s low point to around 470 Kilometers in altitude by reducing the stack’s speed by ~77m/s. Two minutes later, the upper stage jettisoned the primary payload adapter that had been used by the GCOM satellite and entered a downward coast so that the third maneuver by the LE-5B could reduce the high point of the orbit.

The third propulsive maneuver by the upper stage was performed in idle mode – flowing the pressurized propellants into the engine without firing the igniter, creating a small thrust component by the cryogenics vaporizing on the warm engine plumbing and then streaming out of the nozzle. This 46m/s idle maneuver, occurring one hour and 46 minutes into the flight, was around 68 seconds in duration and set the stage for separation of SLATS into a planned orbit of 450 by 643 Kilometers, inclined 98.3 degrees.

For Japan, Saturday’s launch was the second-to-last in 2017 with the re-flight of the SS-520-5/TRICOM mission set for December 28 to demonstrate the smallest orbital space launch vehicle ever flown.