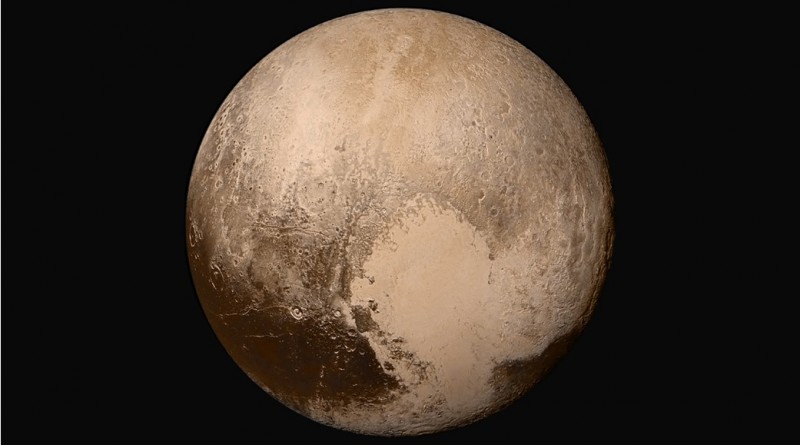 New Horizons has finished delivering new photos of the spacecraft’s encounter with the Pluto System until September, but apparently saved the most impressive pictures for last. Mission scientists provided another update on their preliminary findings from First-Look and High-Priority Data downlink sessions that were completed in the week following the July 14 encounter. Photos sent back from the faraway space probe show evidence of glacial flows of nitrogen ice, moving ices embedding mountain ranges, and an atmosphere with haze layers reaching as high as 160 Kilometers.

Immediately after the first photos of the close encounter came back from the spacecraft, scientists realized that Pluto and its companion Charon have a much more complicated story to tell than believed before the flyby of New Horizons. To the surprise of scientists, Pluto and Charon both displayed young surfaces indicating recent geologic activity. Pluto’s heart captured the hearts of people around the world and proved to be one of the most interesting features of Pluto where flat, icy plains meet towering mountains consisting of water ice, rising as high as four Kilometers.

The latest views of Pluto’s prominent heart feature informally named Tombaugh Regio after Clyde Tombaugh who discovered Pluto in 1930 show a complex geology in the boundary between flat icy plains and the rugged mountainous terrain that primarily consists of water ice hardened by the extremely low temperatures on Pluto.

A new global picture of Pluto comprised of two frames taken by the LORRI imaging telescope and colored from MVIC data achieves a resolution of 2.2 Kilometers, helping scientists piece together the complex story Pluto holds, in the form of a variety of geologic units from the dark regions around the equator intersected by the flat plains of Tombaugh Regio, as well as long tectonic features, a cratered terrain in the northern hemisphere and a number of different surface textures found across the dwarf planet.

Close-up shots acquired by LORRI during closest approach have already shown the unique features seen in the icy plains of Sputnik Planum and now scientists got a close look at the intersection of the mountainous regions to the north and the plains to the south, looking very similar to glacial flow on Earth with the obvious exception that they do not consist of water. Pluto’s ice flow patterns most likely consist of a mixture of frozen nitrogen, carbon monoxide and methane according to the mission scientists. With the discovery of glacial flows, the science team has proven one form of recent or ongoing geological activity in contrast to the previous belief that Pluto had a surface frozen billions of years ago without much of a story at all.

In fact, Sputnik Planum is one of the youngest surfaces anywhere in the solar system as evident by its complete lack of craters. What drives geologic activity on Pluto is still a mystery. One possibility is convective activity caused by heat from inside Pluto.

The boundary between Sputnik Planum and the mountains to the southwest is just as interesting as the glaciers to the north, but very different. Dubbed Norgay Montes and Hillary Montes after the first conquerors of Mount Everest, the two mountain ranges appear to be surrounded by the ices of Sputnik Planum. Scientists believe that the ices moved and embedded the Hillary Montes as evident by a thinning sheet of ice to the south of Hillary Montes characterized by smaller blocks of ice.

Beyond Hillary Montes and a thin ice sheet lies the dark Cthulhu Regio that is part of the dark band stretching around Pluto’s equator. The dark area shows an abundance of craters, telling scientists that it must be much older than the plains of Sputnik Planum.

An enhanced color image using information from the Ralph instrument has been created to bring out the differences in composition between the various surface regions on Pluto. Overall, Pluto exhibits bands of areas similar or identical in composition as shown in the image with a red-brownish north pole, a brighter band to the south and the very dark band around the equator. These bands are likely the result of different exposures to the sun given the tilt of Pluto’s rotational axis versus its orbital plane. The dark band around the equator shows one noticeable irregularity – Tombaugh Regio which has been the focus of study up to this point.

Scientists are attempting to sort out the origin of the heart and its role in Pluto’s climate cycle and its atmosphere, but they surely have their work cut out for them.

Compositional analysis has already revealed that the smooth, icy surface in the western lobe of the heart consists of nitrogen and methane which are two abundant constituents in Pluto’s surface material across the body. But what can also be found in Tombaugh Regio that makes it unique is carbon monoxide which otherwise can not be found on Pluto – suggesting that the western lobe of the heart represents a source of CO, feeding the atmosphere and also distributing carbon monoxide to other areas such as the eastern lobe that appears to consists of some rugged terrain covered with a thin layer of ice.

Transportation mechanisms are still being looked at and may include aeolian transport of ice particles, sublimation followed by re-sublimation or precipitation, or a currently unknown mechanism. Scientists currently believe that the heart is Pluto’s major reservoir that supplies the atmosphere in which compounds can enter reactions and be altered before precipitating back to the surface.

Scientists are also eager to find out whether there is a liquid ocean under Pluto’s crust which is suggested by the low density of the body. The photos that have been delivered by New Horizons do not yet provide direct evidence of the hypothesized ocean of liquid nitrogen and scientists will have to wait for more data.

A spectacular photo shows the silhouette of Pluto, looking back at the front-illuminated dwarf planet. One of the most impressive images released from a space mission in recent years, the shot also holds an equally impressive scientific discovery: Pluto’s atmosphere includes layers of haze that extend much higher into the atmosphere than predicted by models that indicated that hazes above 30 Kilometers would not be possible. The haze stretches to altitudes of up to 160 Kilometers where the atmosphere is heating up and where icy particles were not expected to survive. In addition to a distinctive high-altitude haze layer at 83 Kilometers, a second layer can be found at around 50 Kilometers above the surface.

The working theory is that the haze is created by photochemical reactions at high altitudes in which methane is broken apart by ultraviolet radiation forming radicals and molecules that can then enter reactions to form complex hydrocarbons such as Ethylene and Acetylene which have already been detected by New Horizons. As these substances build up, they become saturated and nucleate to form icy particles that constantly grow, becoming visible as haze layers before falling to the ground.

This formation of complex hydrocarbons in the atmosphere may also be the origin of tholins, heteropolymer molecules generated from simple compounds under the influence of UV radiation. Tholins are usually reddish-brown in appearance and may explain Pluto’s color.

Another mystery came from preliminary data delivered by REX, the Radio Science Experiment that recorded a radio signal sent from Earth and passing through the Plutonian atmosphere before arriving at the spacecraft to derive atmospheric temperature and pressure as a function of altitude. Data from the instrument suggests that Pluto’s surface pressure is at most 10 millibars, about half the surface pressure measured two years ago using stellar occultations, indicating that some process is yet to be discovered that led to a significant loss of atmospheric mass.

Pressure data from Pluto has been collected since 1989 through stellar occultation measurements and has shown a steep increase in surface pressure since that time until the last measurement in 2013. Pluto had reached its closest position to the sun in its eccentric orbit in 1989 and scientists hypothesize that Pluto’s atmosphere varies in mass (and surface pressure as a result) with the dwarf planet’s distance to the sun over the course of its 248-year orbit. It is possible that the atmosphere continued to grow in mass after the 1989 perihelion passage due to a climatic lag and what was seen by New Horizons would be the first stages of the atmospheric collapse taking place as Pluto opens its distance from the sun.

This is currently only based on one data point of REX, more of which are to come in the coming months. The SOFIA infrared telescope was deployed to New Zealand for New Horizons’ Pluto encounter to take advantage of a stellar occultation and conduct measurements around the same time New Horizons made its flyby to provide data validation. Scientists are eager to learn more about the mechanisms that are at work when Pluto loses most of its atmosphere as it ventures out into the distant regions of the Solar System and New Horizons may have just captured data on the drivers behind atmospheric changes that are ongoing during the collapse of Pluto’s atmosphere.

Charon’s atmosphere, if present at all, has to be much more tenuous as indicated by scientists after a quick look analysis of data delivered by the ALICE ultraviolet spectrometer. The largest of Pluto’s five moons may have a very slim atmosphere consisting of nitrogen, but additional data and time for analysis will be needed to provide a definitive answer.

So far, New Horizons has not disappointed, delivering amazing photos and astonishing data – looking at two incredibly interesting worlds, Pluto and Charon, that will keep scientists busy for years as new textbooks are written using the precious data that is still to be delivered by New Horizons. Only about 5% of the total data stored onboard the spacecraft has been downlinked so far with photos only available in a lower resolution. The downlink of data from all instruments and all images in raw format for full resolution will take over one year.

No new images will arrive on the ground until September as the mission heads into the systematic downlink of data, starting with six weeks of Low-Speed Data downlink comprised of some instrument data, spacecraft telemetry and pointing data. In September, the downlink of Browse Data begins – the full data set in a highly compressed form to provide the team with an overview of what is available in terms of images and data in order to ease the selection of data packages to be downlinked in full resolution. Teams expect the entire data set to be on the ground by the end of 2016.